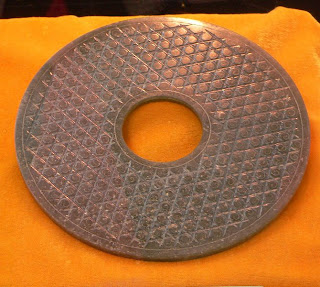 The bi (Chinese: 璧; pinyin: bì; Wade-Giles: pi) is a form of circular jade artifact from ancient China. The earliest bi were produced in the Neolithic period, particularly by the Liangzhu culture (3400-2250 BC). Later examples date mainly from the Shang, Zhou and Han dynasties. They were also made in glass.

A bi is a flat jade disc with a circular hole in the centre. Neolithic bi

are undecorated, while those of later periods of China, like the Zhou dynasty, bear increasingly ornate surface carving (particularly in a hexagonal pattern) whose motifs represented deities associated with the sky (four directions) as well as standing for qualities and powers the wearer wanted to invoke or embody.

As laboriously crafted objects, they testify to the concentration of power and resources in the hands of a small elite.

Later traditions associate the bi with heaven, and the cong with the earth. Bi disks are consistently found with heaven and earth-like imagery, suggesting that the disk's circular shape also bears symbolic significance as this description explains:

and Han periods: the notion of a covering sky (gaitian) that revolves around a central axis, the cycle of the Ten Suns, and the use of an early form of the carpenter's square. These objects were handled by shamans who were the religious leaders of Liangzhu society and the transmitters of cosmological knowledge.

The original function and significance of the bi are unknown, as the Neolithic cultures have left no written history. From these earliest times they were buried with the dead, as a sky symbol, accompanying the dead into the after world or "sky", with the cong which connected the body with the earth. They were placed ceremonially on the body in the grave of persons of high social status. Bi are sometimes found near the stomach and chest in neolithic burials.

Jade, like bi disks, has been used throughout Chinese history to indicate an individual of moral quality, and has also served as an important symbol of rank. They were used in worship and ceremony – as ceremonial items they symbolised the ranks of emperor, king, duke, marquis, viscount, and baron with four different kweis and two different bi disks.

In war during the Zhou dynasty period (11th to 250 BC), bi disks belonging to the leaders of the defeated forces were handed over to the victor as a sign of submission.

The design of the reverse side of the medals given in the 2008 Summer Olympics in Beijing, China

are based on bi disks.

The He Shi Bi (Chinese: 和氏璧; pinyin: Hé Shì Bì; literally "Jade disc of He") is a piece of jade which plays an important part in many historical stories in Ancient China. Found in the State of Chu by a man named Bian He, it was first made into a jade disc, then into the Imperial Seal of China by Qinshihuang.

In 221 BC, Qin conquered the other six Warring States and founded the Qin Dynasty

; the He Shi Bi thus fell into the hands of Qin Shi Huangdi, who ordered it made into his Imperial seal. The words, "Having received the Mandate from Heaven

, may (the emperor) lead a long and prosperous life." (受命於天，既壽永昌) were written by Prime Minister Li Si, and carved onto the seal by Sun Shou. This seal was to be passed on even as the dynasties rose and fell, but was lost in the Five Dynasties and Ten Kingdoms