The Lohans of Buddhism 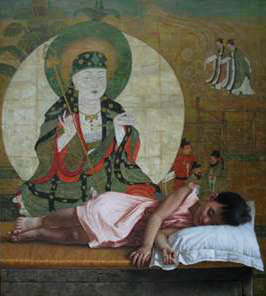 In Theravada Buddhism, the Arhat, Arahat or Arahant, translated into Chinese as Lohan, is one who has followed the Eightfold Path

and has achieved deliverance of this earthly existence. He has reached "the other shore" and is saved for all eternity. In him the asavas - the craving for sensual pleasures, earthly existence, ignorance and wrong views - are gone. He is subject to no more rebirths and karma.

Lohans are well-known for their great wisdom, courage and supernatural power. Due to their abilities to ward off the evil, Lohans have became guardian angels of the Buddhist temple and there in the main hall standing guard are the ever-present, indomitable-looking 18 Lohan figures, sometimes accompanied by 500 or more lesser Lohans.

According to tradition, there were originally only 16 lohans. Two were added on the list by the Chinese in the Tang Dynasty.

Legend has it that the first portraits of the 18 Lohans

were painted by a Buddhist monk Guan Xiu, in 891 A.D. Guan Xiu lived in Chengdu, the capital of a small kingdom, the Former Shu, formed at the decline of the Tang Dynasty in what is today's Sichuan Province. He was adept at the scholarly pursuits of painting, calligraphy and poetry.

It was because of his expert painting skill that the Lohans chose him to paint their portraits. They appeared to him in his dreams to make that request.

The traditional order of the 18 Lohans is based on the order in which they appeared in Guan Xiu's dreams, not on the strength of their power. The order is: Deer Sitting, Happy, Raised Bowl, Raised Pagoda, Meditating, Oversea, Elephant Riding, Laughing Lion, Open Heart, Raised Hand, Thinking, Scratched Ear, Calico Bag, Plantain, Long Eyebrow, Doorman, Taming Dragon and Taming Tiger Lohans.

Since then, Chinese artists, be they painters, sculptors or potters, have sought to give flesh and blood to these essentially mythical figures. Often they would base their portrayals of the Lohans on Guan Xiu's paintings. Innumerous legends have served to provide attributes and dispositions, from which the artists draw their inspiration. As each artist has his own method of expression, thus the portrayals of the Lohans differ from dynasty to dynasty and from place to place.
at 05:34