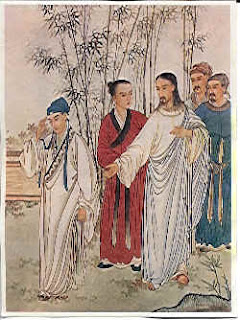 "I will go to China to translate the Bible!"

With this firm resolve, a young franciscan friar called Gabriele Allegra set out to do what no one had yet succeeded in accomplishing. Born on 26th December 1907 in Sicily, Gabriele entered the Franciscan Order in 1923. While studying in Rome for the priesthood, he was inspired by the example of the 1st catholic missionary to China, the franciscan John of Montecorvino who in 1295 translated the Psalms and the New Testament into the Mongolian language. Since then, many attempts were made to translate the Scriptures into chinese but only parts of it were successfully completed. Fr Allegra was determined to give the entire Word of God to this great nation, hence in 1931 he left Italy for China at the age of 24, with nothing more than an ardent love for the Word of God and the chinese people, and confidence in the Virgin Mary.

Blessed with a photographic memory and a gift for languages, he mastered enough of the chinese language in 3 months to hear confessions in his mission in HengYang (Hunan Province). While studying the hebrew language on his own, he began translating the Old Testament in 1935.

In 1944, after much fatigue, Fr Allegra completed the translation of the Old Testament from the original Hebrew and Aramaic languages. However the Japanese occupation of China forced Fr Allegra to leave his mission in HengYang for the safety of Beijing. Due to the ensuing chaos, Fr Allegra lost half of his precious manuscripts along the way. The following year he began to gather a handful of chinese friars to further assist him. Frs Solanus Lee ofm and Antonius Lee ofm were the first to be recruited. They were later followed by Frs Bernardinus Lee ofm and Ludovicus Liu ofm. These friars set about translating the Old Testament as well as correcting and revising the surviving texts of Fr Allegra. Commentaries on the Old Testament were also being written simultaneously. Fr Allegra himself taught them hebrew and greek.

That same year in 1945, the Studium Biblicum was officially inaugurated in Beijing at 6 Ly Kwang Kiao (a former imperial palace near the Forbidden City). In 1946 the translation and commentary on the Psalms were published. The Wisdom Books were then published in 1947 and the following year, the Pentateuch. Diocesan priests Frs Victor Tso and Marcus Chen joined the Studium that year.

Due to the impending civil war in 1948, the friars were forced to move the Studium Biblicum to a safer haven in Hong Kong. The Guardian of the Franciscan House at 133 Waterloo Road (Kowloon), Fr Seraphim Priestly, welcomed the Studium members and sheltered them there. The Studium continued its work there despite the turmoil around them. Refugee missionaries from every conceivable Order were welcomed at the Franciscan House, from Marists brothers to Trappist monks. During this time, franciscan friars seeking refuge from the Mainland also came into Hong Kong. Fr Allegra took advantage of this opportunity to gather the best scholars from among them to work with the Studium. Among this group was Fr Tarcisius Benvegnu ofm, a greek specialist. Under very trying circumstances, the friars succeeded in publishing the 1st volume of the Historical books.

As more refugees were being received at the Franciscan House at Waterloo Road, the work of the Studium was constantly disrupted. Consequently a new location was found to house the Studium Biblicum in 1950. This was to be at 70 Kennedy Road, a house built into a mountainside on Hong Kong island. New collaborators were added to the community: Fr Vianney Chang ofm, Bro Agnellus Van der Wiede ofm, Fr Conrad Ly and Fr Accursius Yang ofm. That same year, the 2nd volume of the Historical books was published. In 1953 the community welcomed Fr Theobald Diederich ofm as its latest member.

In 1951, the Book of Isaiah was published, followed by Jeremiah and Ezekiel in 1952; and lastly Daniel and the 12 minor prophets in 1954. In exactly 20 years the entire Old Testament was translated and commented upon, thanks to the untiring efforts and sacrifices of the friars under the direction of Fr Allegra .

After fulfilling their monumental task of the publishing the Old Testament, the friars of the Studium took a sabbatical year to visit the Holyland in order to further their biblical studies at the Studium Biblicum Jerusalem. There in Jerusalem in 1954, strong links were forged between the two franciscan bible institutes. Fr Allegra himself preached a retreat at the Jerusalem Studium and also taught the Gospel of John.

Re-invigorated both in spirit and knowledge, the friars returned to Hong Kong in 1955 to begin translating the New Testament from greek into chinese. They succeeded in publishing the gospels with commentary within 2 years of labour (1957), and saw the completion of the Acts of the Apostles and the Pauline letters in 1959. The final phase was crowned by the publication of the Catholic letters and the Apocalypse in 1961. The dream of Fr Allegra was at last fulfilled. The Chinese Church has at her disposal the Word of God in her own tongue!

In 1968 the New and Old Testaments were published for the 1st time in a single volume.

But the work of the Studium Biblicum was far from over. Joined by Fr Benjamin Leong ofm in 1963 and Fr Gaspar Han ofm in 1967, the Studium undertook to compile a dictionary of the Bible in chinese. Entries were divided among the friars who had to research and write a concise article on each. The articles were collected, edited and published in 1975.

With the major task of bible translation completed, most of the friars were transferred unilaterally by the Franciscan Province to Taiwan to work as curates of parishes or principals in schools. Only a third of the friars remained in Hong Kong to work on the Dictionary project. With fewer friars living in the Studium, it was decided that the community move to a smaller house. The transfer was made in 1972 to 6 Henderson Road at Jardines Lookout (Hong Kong island).

Since then, new members were added to the Studium: Fr Placid Wong ofm in 1993 and Fr Lionel ofm in 1995. The spirit of bringing the Word of God to the chinese people lives on in the Studium Biblicum. A bi-monthly Bible magazine was published in 1977 which in 1999 was re-formatted as the Biblical Quarterly. In 1969 Fr Marcus Chen initiated the setting up of the Catholic Biblical Association in Hong Kong by presenting the proposal and statutes (written by Fr Allegra) to Bishop Hsu. In 1973 the Hong Kong Biblical Association was officially established. Further impetus resulted in the founding of a similar association in Taiwan and Singapore-Malaysia. In 1987 the Federation of Chinese Biblical Associations was founded which include Macau and Mauritius just to name a few of the new members.

In 1986 the Studium gathered in its premises catholic bible scholars from Hong Kong and proposed the setting up of a biblical institute which would form laity and religious alike in the biblical sciences. Graduates would receive a Diploma from the Studium Biblicum Jerusalem. The Catholic Biblical Institute was thus founded in 1987 through the co-operation of the Hong Kong Diocese and various religious congregations.
at 09:37