The Tao of Pooh, The Te of Piglet 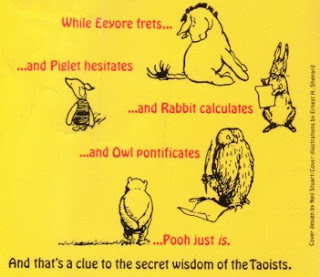 The Tao of Pooh

is a book written by Benjamin Hoff

. The book is an introduction to Taoism, using the fictional character of Winnie the Pooh. Hoff later wrote The Te of Piglet

and the other characters from A. A. Milne's stories to explain the basic principles of philosophical Taoism. Winnie the Pooh, for example, represents the principles of Wuwei

. The book also includes translated excerpts from various Taoist texts, from authors such as Lao Zi

, which is an actual painting concerning Lao Zi, Buddha, and Confucius over a vat of vinegar. Then the story unfolds backing up this analogy.

The book was on the New York Times bestseller list

for 49 weeks and is used as required reading in some college courses.

Ten years after his 1982 work The Tao of Pooh, Benjamin Hoff was pressed to write a follow up of his Western inquiry into Taoism. He did this by writing The Te of Piglet, published in 1992. It is still in print, with a paperback edition issued by Penguin USA

Hoff explicitly states that this second book is not a sequel to his first book, but rather a companion. The book is based around two topics, the concept of Te, the Chinese word meaning 'power' or 'virtue', and Piglet of the Winnie the Pooh

In his first book, he brought out the essential tenets and perspectives of Taoism, in terms accessible to Westerners. In his second book, he elucidates the Taoist concept of 'Virtue

— of the small'; though, he also uses it as an opportunity to elaborate on his introduction to Taoism. It is written with many embedded stories from the A. A. Milne

Winnie the Pooh books, both for entertainment and because they serve as tools for explaining Taoism.

In The Te of Piglet, Piglet is shown to possess great power — a common interpretation of the word Te

, which more commonly means Virtue — not only because he is small, but also because he has a great heart or, to use a Taoist term, Tz'u

. The book goes through the other characters — Tigger

, and Pooh — to show the various aspects of humanity that Taoism says get in the way of living in harmony with the Tao