Hanukkah, the Biblical Festival of Lights of Judith and the Macabees 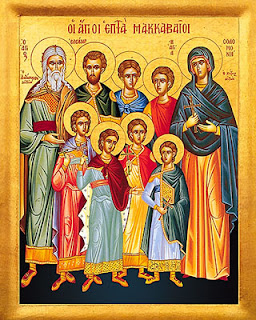 Hanukkah (Hebrew: חֲנֻכָּה‎, Tiberian: Ḥănukkāh, nowadays usually spelled חנוכה pronounced [χanuˈka] in Modern Hebrew, also romanized as Chanukah or Chanuka), also known as the Festival of Lights is an eight-day Jewish holiday commemorating the rededication of the Holy Temple (the Second Temple) in Jerusalem at the time of the Maccabean Revolt of the 2nd century BC. Hanukkah is observed for eight nights and days, starting on the 25th day of Kislev according to the Hebrew calendar, which may occur at any time from late November to late December in the Gregorian calendar.

The festival is observed by the kindling of the lights of a unique candelabrum, the nine-branched Menorah or Hanukiah, one additional light on each night of the holiday, progressing to eight on the final night. The typical Menorah consists of 8 branches with an additional raised branch. The extra light is called a shamash (Hebrew: שמש, "attendant" or "sexton") and is given a distinct location, usually above or below the rest. The purpose of the shamash is to have a light available for use, as using the Hanukkah lights themselves is forbidden.

The name "Hanukkah" derives from the Hebrew verb "חנך", meaning "to dedicate". On Hanukkah, the Jews regained control of Jerusalem and rededicated the Temple.

Many homiletical explanations have been given for the name:
The story of Hanukkah, along with its laws and customs, is entirely missing from the Mishna

apart from several passing references (Bikkurim 1:6, Rosh HaShanah 1:3, Taanit 2:10, Megillah 3:4 and 3:6, Moed Katan 3:9, and Bava Kama 6:6). Rav Nissim Gaon postulates in his Hakdamah Le'mafteach Hatalmud that information on the holiday was so commonplace that the Mishna felt no need to explain it. Reuvein Margolies

suggests that as the Mishnah was redacted after the Bar Kochba revolt, its editors were reluctant to include explicit discussion of a holiday celebrating another relatively recent revolt against a foreign ruler, for fear of antagonizing the Romans.

Hanukkah is described in the Talmud

. The Gemara, in tractate Shabbat 21, focuses on Shabbat candles and moves to Hanukkah candles and says that after the forces of Antiochus IV had been driven from the Temple, the Maccabees discovered that almost all of the ritual olive oil had been profaned. They found only a single container that was still sealed by the High Priest, with enough oil to keep the menorah in the Temple lit for a single day. They used this, yet it burned for eight days (the time it took to have new oil pressed and made ready).

The Talmud presents three options:
Except in times of danger, the lights were to be placed outside one's door, on the opposite side of the Mezuza

, or in the window closest to the street. Rashi

, in a note to Shabbat 21b, says their purpose is to publicize the miracle.

, how the victorious Judas Maccabbeus ordered lavish yearly eight-day festivities after rededicating the Temple in Jerusalem that had been profaned by Antiochus IV Epiphanes

. Josephus does not say the festival was called Hannukkah but rather the "Festival of Lights":


"Now Judas celebrated the festival of the restoration of the sacrifices of the temple for eight days, and omitted no sort of pleasures thereon; but he feasted them upon very rich and splendid sacrifices; and he honored God, and delighted them by hymns and psalms. Nay, they were so very glad at the revival of their customs, when, after a long time of intermission, they unexpectedly had regained the freedom of their worship, that they made it a law for their posterity, that they should keep a festival, on account of the restoration of their temple worship, for eight days. And from that time to this we celebrate this festival, and call it Lights. I suppose the reason was, because this liberty beyond our hopes appeared to us; and that thence was the name given to that festival. Judas also rebuilt the walls round about the city, and reared towers of great height against the incursions of enemies, and set guards therein. He also fortified the city Bethsura, that it might serve as a citadel against any distresses that might come from our enemies."

(which the Jews and Protestants have removed from their Bibles) but Hanukkah is not specially mentioned; rather, a story similar in character, and obviously older in date, is the one alluded to in 2 Maccabees 1:18 et seq according to which the relighting of the altar fire by Nehemiah was due to a miracle which occurred on the twenty-fifth of Kislev, and which appears to be given as the reason for the selection of the same date for the rededication of the altar by Judah Maccabee.

Another source is the Megillat Antiochus

. This work (also known as "Megillat HaHasmonaim", "Megillat Hanukkah" or "Megillat Yevanit") is in both Aramaic and Hebrew; the Hebrew version is a literal translation from the Aramaic original. Recent scholarship dates it to somewhere between the 2nd and 5th Centuries, probably in the 2nd Century, with the Hebrew dating to the seventh century. It was published for the first time in Mantua in 1557. Saadia Gaon

, who translated it into Arabic in the 9th Century, ascribed it to the Maccabees themselves, disputed by some, since it gives dates as so many years before the destruction of the second temple in 70 AD. The Hebrew text with an English translation can be found in the Siddur of Philip Birnbaum

refers to Jesus being at the Jerusalem Temple during "the feast of the dedication and it was winter" in John 10:22-23.

The eating of dairy foods, especially cheese, on Hanukkah is a minor custom that has its roots in the story of Judith. The so-called "deuterocanonical" book of Judith (Yehudit or Yehudis in Hebrew), which is no longer part of the Jewish or Protestant Tanach

, records that, Holofernes, an Assyrian general, had surrounded the village of Bethulia as part of his campaign to conquer Judea. After intense fighting, the water supply of the Jews is cut off and the situation became desperate. Judith, a pious widow, told the city leaders that she had a plan to save the city. Judith went to the Assyrian camps and pretended to surrender. She met Holofernes, who was smitten by her beauty. She went back to his tent with him, where she plied him with cheese and wine. When he fell into a drunken sleep, Judith beheaded him and escaped from the camp, taking the severed head with her. When Holofernes' soldiers found his corpse, they were overcome with fear; the Jews, on the other hand, were emboldened, and launched a successful counterattack. The town was saved, and the Assyrians defeated. There is a longstanding Jewish tradition that Judith was the daughter of Yochanan the Kohen Gadol (and consequently a sister of Mattathias the Hasmonean and an aunt of Judah the Maccabee). In the Rema's gloss on the Shulchan Aruch he writes “There are authorities (Kol Bo and the RaN) who say that one should eat cheese on Hanukkah, because the miracle was performed with milk that Judith fed the enemy.” The Chofetz Chaim there adds in his Mishna Berurah on the words “that Judith fed,” “She was the daughter of Yochanan, the Kohen Gadol. There was a decree that every espoused bride should submit to the dignitary first before the consummation of her marriage. She fed cheese to the head of the oppressors in order to intoxicate him and cut his head and they all fled.”

Timeline of Hanukkah:
The Jews believe that after this time all prophecy ended and would only begin at the coming of the Messiah, which happened less than a century later with the birth of Jesus the Christ and his Forerunner, John the Baptist, the last prophet of the Old Testament