Metropolitan Hilarion: Orthodox China suffers from a lack of priests

After the publishing of the book "Orthodoxy in China

," chairman of the Department for External Church Relations of the Moscow Patriarchate, Metropolitan Hilarion of Volokolamsk, told the Vesti.ru website about the history and development of the Orthodox Church in this country. 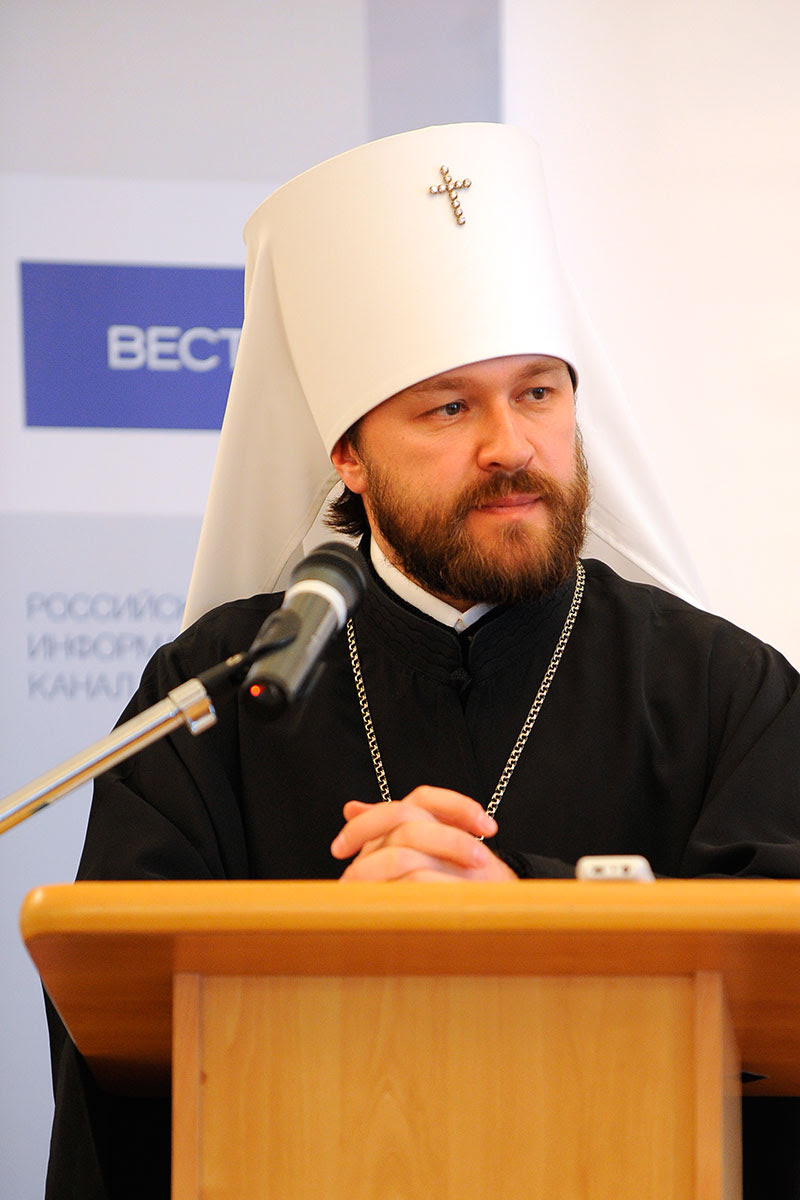 - Vladyka, today Catholics and Protestants who live in China, are saying that there is an increase in their parishioners from the local community. What is the status of believers of the Orthodox Church?

- In 2010, Orthodoxy in China celebrated its 325th anniverary. It was brought to Beijing by Russian Cossacks captured from Albazin prison. By that date, was released the unique book "Orthodoxy in China" which describes the emergence and formation of the Orthodox culture on Chinese soil.

Since the beginning of the XVIII century up to 1917 the Russian Orthodox Church has sent to China 20 religious missions. Their concerns primarily focused on preaching the gospel of Christ and spiritual guidance to Orthodox believers. But at the same time the activities of these missions included the study of language and translation of liturgical texts, and studying the culture, history and contemporary life of Chinese people. Proceedings of the Russian missionaries have made a significant contribution to the development of domestic knowledge of China.

By the XX century, the Chinese Orthodox Church included not only numerous Chinese flock, but also its national clergy and even bishops. At the end of 1956 the Holy Synod of the Russian Orthodox Church has decided to grant her autonomy, and in 1957 the Episcopal consecration of first primate of Chinese Autonomous Orthodox Church - Bishop Basil (Shuang) of Beijing took place. However, after the death of Bishop Basil in 1962 and then Bishop Simeon of Shanghai in 1965, we specifically emphasize - consecrated in Moscow by bishops of the Russian Orthodox Church, with the consent of the State Administration for Religious Affairs of China - Chinese Orthodox Church was deprived of pastoral leadership, and in the "Cultural Revolution" her life went into decline.

Currently in China there are several Orthodox communities in the north-east China, in Xinjiang Uygur Autonomous Region, Beijing, Shanghai and other cities. Many communities are deprived of pastoral care and temples. Temples exist only in Harbin, Labdarin, Urumqi, Gulja, Chugachuk. Orthodoxy is recognized as a religion of the Russian national minorities in the special autonomous regions of Xinjiang and Inner Mongolia, and Heilongjiang Province.

Today the Orthodox Christians of China suffer from a lack of priests and regular worship. The Russian Orthodox Church as the Mother Church is interested in the restoration of the Chinese Autonomous Orthodox Church. At this stage, our church is ready to provide comprehensive assistance to the Chinese faithful, and above all, the availability of Chinese priests.

On the background of the increasing number of Catholics and Protestants in China today, the Orthodox faithful of this country who have more than 300 years of tradition, unfortunately, are prevented from normal church life. And it does not help their numbers to increase.

- How are developing the relations between the leadership of the PRC and the Moscow Patriarchate on the issue of normalizing the situation of the Russian Orthodox Church in China?

- Russian-Chinese bilateral agreement that includes a paragraph on promoting dialogue and cooperation between the leading religions of Russia and China is under implementation. For example, in November 2009 I headed the delegation of the Council for Cooperation with Religious Associations under the Russian President, which included representatives of the Department for External Church Relations of Moscow Patriarchate, and visited China at the invitation of China's State Administration for Religious Affairs. We held talks on Russian-Chinese cooperation in the religious sphere, in accordance with the Plan of Action to implement the provisions of the Treaty of Good-neighborliness, Friendship and Cooperation between the Russian Federation and the Republic of China for 2009-2012. As a result of the visit the Memoranda of Understanding were signed and the order of interaction, as well as training opportunities in the theological schools of the Russian Orthodox Church, for students from China.

In September 2010, a delegation from China's State Administration for Religious Affairs visited Russia as guests of the Russian Orthodox Church and visited Moscow and St. Petersburg theological schools to determine where students from China will study. We hope that this year, Chinese students will come to Russia to study.

The Council for Cooperation with Religious Associations under the Russian President, a working group was formed for relations with China in the religious sphere. The activities of this group, we hope, will assist, in particular, in the normalization of the situation of Orthodoxy in China. Already available are the first results of such cooperation. The Chinese side has allowed the priest from Russia to celebrate a Pascha service for the compatriots in the Protection church in Harbin. I hope that the practice of pastoral visits of priests from the Russian Orthodox Church to Orthodox communities in China, who have no priests of their own, on particularly revered days - Pascha and the Nativity of Christ - will be maintained and expanded to other cities. On the feast day of Holy Protection Church in Harbin, Russian and Chinese believers prayed worshiped together, served by the senior priest Michael Wang of the Chinese Autonomous Orthodox Church.

At the present time, Orthodox priests from Russia are conducting services also for Russian citizens in the diplomatic missions of the Russian Federation in Beijing, in the restored Embassy Church of the Dormition of the Theotokos, and in Shanghai. Activity was also restored in SS. Peter and Paul parish in Hong Kong. There are house churches in Shenzhen, Guangzhou and Macau, where the divine services are held for foreigners.

- Do you plan to open the parishes of the Russian Orthodox Church in Taiwan. And if so, how soon?

- In 1949, Russian immigrants came to Taiwan from Shanghai and Xinjiang. At their invitation in 1957, Archbishop Irenaeus of Tokyo visited Taipei, which held the service in a private home. In 1958 in the same house was appointed a temporary church, dedicated to John the Baptist. Vladyka Irenaeus, and eventually priests under his omophorion have regularly visited Taiwan. Once Archbishop John (Shakhovskoi) has visited Taipei.

Today there are around 300 Russian citizens in the consular register in Taipei. Russian-speaking Orthodox Diaspora currently attends the parish of the Patriarchate of Constantinople, but the Greek priest does not speak Russian and can not fully meet the pastoral needs of our believers.

Official documents regulating the relations of Russia and China, stressed that Russia and China are pursuing a policy of "one China", but while maintaining a unified political position the parties do not interfere with each other in the development of economic, cultural and other relations with Taiwan. The Taiwanese side expresses its readiness to assist the Russian Orthodox Church in the opening of the parish. But talks about specific dates are still premature.

- What is the fate of Chinese seminarians who have studied in our theological schools?

- For several years, the Russian Orthodox Church provided opportunities for citizens of China who were seeking a spiritual education, to study in religious schools in Moscow and St. Petersburg. However, until recently, the citizens of China who have received religious education in Russia, could not continue their ministry in the existing Orthodox churches in China due to lack of All-Chinese Orthodox organization. I hope that now, after the signing of agreements on theological education in Russia, there will be opening up new prospects for Chinese students.

- Are there in the PRC, "Chinese" parishes, where the service is held in Chinese language? Is there a need for this?

- To date, China has up to 15,000 Orthodox believers. They mostly live in Beijing, Shanghai, Heilongjiang Province, autonomous regions of Xinjiang and Inner Mongolia. Chinese Autonomous Orthodox Church has only two Chinese clergy, an 87-year-old priest, Michael Wang Quansheng and 83-year-old Archdeacon Evangel Lu Yafu. They only occasionally, given their advanced age, may conduct worship services, including in the Chinese language, and the need for such worship is obvious: these rare services collect a significant number of Chinese believers.

- Tell me about the program of translation of the doctrinal literature into Chinese. What has already been translated and what is planned to be translated in the near future?

- By the effort of Brotherhood of the Holy Apostles Peter and Paul in Hong Kong in recent years they have translated into Chinese Orthodox prayer books, patristic heritage and the modern theological, ascetical, and moral literature. Among them - the work of St. Nicholas Cabasilas "Commentary on the Divine Liturgy

," work of the famous theologian Jaroslav Pelikan "The Christian Tradition

", an essay by Metropolitan John of Pergamon (Zizioulas), "Truth and Communion" and "Personality and Genesis", two collections of lectures by Professor Sergei Khoruzhej about spiritual tradition, and others. Fu Jen University of Taiwan published in the Chinese language my book "On Prayer." The translation of prayers and succession of church services (part of the daily liturgical prayers, a service of Pascha and the Nativity Christ). But much remains to be done.

- How is progress of the development of the interaction with Constantinople in relation to parishes in China?

- The Holy Synod of the Church of Constantinople in 2008, announced China as her Hong Kong metropolis territory, including in its membership a number of countries in South-East Asia. The Russian Orthodox Church regarded this decision with regret, first because it was taken unilaterally, without the knowledge of Orthodox believers living in China, and, second because it ignores the rights of the Chinese Autonomous Orthodox Church.

-In order to normalize the situation, in your opinion, how many churches, priests and parishes are required in the PRC?

- To determine the number of churches in China is an internal affair of the Chinese Autonomous Orthodox Church. Their number must meet the demands of its flock, which now exists of China, not only from citizens of the PRC, but also from a significant number of foreigners of the Orthodox faith from Russia, Ukraine, Belarus and other countries. However, it is known that by 1956 China had about a hundred churches, houses of worship and missionary houses.