Origin of the Chinese & Miao Memory of Origins 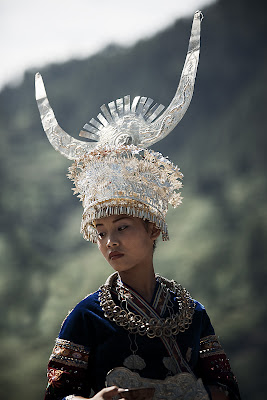 After the Flood Noah's his descendants migrated to the plains of Shinar. On this plain, today known as Iraq, (Summer c. 3500 BC to 2000 BC) became the first civilization on earth. The religio/political upheaval which followed "Tower of Babel" induced people to migrate to other parts of the world.

There is increasing evidence of the connection between Biblical Genesis (Ch. 1-11) and the origin of Chinese Civilization. In Genesis 10 we have the Table of Nations, that is, the descendants of Noah's three sons Shem, Ham and Japhet. Ham is regarded as the father of the Mongoloid and Negroid races because he generated Canaan whose two sons Heth (Hittites/Cathey) and Sin (Sinite/China) who are presumed to be the progenitors of the Mongoloid stock.

"The name Sin appears frequently in the Chinese language, and the city of Xian, a provincial capital in western China, was known as Sianfu in the nineteenth century, meaning "Father Sin." Some scholars have suggested that the Sin referred to here may have been Fu Xi, the legendary first king of China, who began his reign in 2852 B.C. Later, when the first Chinese kingdom broke up in the first millennium B.C., a state named Qin (also spelled Tsin or Ch'in), arose near Xian; the Qin rulers reunited the land in the third century B.C., and the whole land became known as China, named after Qin. Thus the name "Sin" came to us in a roundabout fashion, altered over the ages to become "China." The ancient name also appeared in its original form in the 1960s and 70s when news reports told about the "Sino-Soviet" border dispute." (A Biblical Interpretation of World History

Most likely the Chinese Civilization began in the area of the former Chinese capital Shensi or Siang-fu (Father Sin) also called Hang'an and today called Xi'an meaning city of "Everlasting Peace". This is the place where the Silk Road began and served as the first capital of the unified empire. "One ancient Chinese classic called the "Hihking" tells the story of Fuhi, whom the Chinese consider to be the father of their civilization. This history records that Fuhi, his wife, three sons, and three daughters escaped the great flood. He and his family were the only people left alive on earth. After the great flood they repopulated the world. An ancient temple in China has a wall painting that shows Fuhi's boat in the raging waters. Dolphins are swimming around the boat and a dove with an olive branch in its beak is flying toward it."

There are also cultural similarities between the Chinese and Chaldeans

which suggest their origin. Like the Chaldeans, the Chinese had astronomical knowledge and belief in astrology, used same of methods of measurement, the cycle of sixty and decimal system. They believed in interrelation and correspondence of five elements, the five colors, the harmony of numbers and a multitude of other customs that the Chaldeans had. All of this cannot be mere coincidence."

Another indication of the origin of the Chinese was their monotheism. They believed in Shang-Di, the Supreme Heavenly Ruler of whom they never made an image.

At the Border Sacrifice, a single calf, male or female, was sacrificed. "Why a calf? Because of its guileless simplicity,' says Kâu Hsü of our eleventh century; earlier than Kû Hsî, who adopted his explanation. The calf, whether male or female, has not yet felt the appetency of sex, and is unconscious of any 'dissipation.' This is a refinement on the Hebrew idea of the victim lamb, 'without blemish.'"  The oldest Chinese historical source tells us that in the year 2230 BC at the "Border Sacrifice", the Emperor Shun sacrifice to Shang-Di offering the following prayer:


"Of old in the beginning, there was the great chaos, without form and dark. The five elements [planets] had not begun to revolve, nor the sun and moon to shine. You, O Spiritual Sovereign, first divided the grosser parts from the purer. You made heaven. You made earth. You made man. All things with their reproducing power got their being".
"Thou hast vouchsafed, O Di, to hear us for, Thou regardest us as a Father. I, Thy child, dull and unenlightened, am unable so show forth the dutiful feelings".
"Thy sovereign goodness is infinite. As a potter, Thou hast made all living thing. Thy sovereign goodness is infinite. Great and small are sheltered [by Thee]. As engraven on the heart of Thy poor servant is the sense of Thy goodness, so that my feelings cannot be fully displayed. With great kindness Thou dost bear us, and not withstanding our shortcomings, dost grant us life and prosperity."

From: Shu Ching, Book of History/Documents

Hieromonk Damascene reflecting on the above prayer state

s: "In general, reading the text of the Border Sacrifice reminds us strongly of the prayers of the Ancient Hebrews as found in the Old Testament: the same reverent awe before God, the same self abasement, humility and gratitude before his greatness. ... It seems that the most ancient Chinese religion and the ancient Hebrew religion are drawn from the same source." From the above it is most likely that the Chinese brought with them the religion of Noah as they migrated from the plains of Shinar.

The Miao people claim to have descended from Japhet, one of the sons of Noah, whose descendants migrated to India and Europe. In this case some found their way into China prior to the ethnic Chinese which today constitute 92% of the population. In any event, all people of the earth presumably migrated from Sumeria due to some religio/historical event "Tower of Babel" of which the book of Genesis speaks. They had no written language till 1957, so oral history and tradition was passed on by song and dance. We find in their tradition the story of Creation, Man's Revolt, the Flood, Babel and Biblical genealogy. The "Fall" is not mentioned in this account. Here is how it begins:


On the day God created the heavens and earth.
On that day He opened the gateway of light.
In the earth then He made heaps of earth and of stone.
In the sky He made bodies, the sun and the moon.
In the earth He created the hawk and the kite.
In the water created the lobster and fish.
In the wilderness made He the tiger and bear,
Made verdure to cover the mountains,
Made forest extend with the ranges,
Made the light green cane,
Made the rank bamboo.
On earth He created a man from the dirt.
Of the man thus created, a woman He formed ....
These [mankind] did not God's will nor return His affection.
But fought with each other defying the Godhead. ....

Here is the beginning of the one of the Miao's People Creation Songs.
Song of Creation of heaven and earth.
Sung by Yang Zhi.

I came across your blog and find it fascinating! There is actually one post in particular where I would like to use some of your ideas in a catechism I am developing for New Age and Eastern inquirers to Eastern Orthodoxy. I do not want to plagiarize, and want to give you full credits, but other than quoting your blog name, I would not know how (or whom). Could you email me and perhaps we could connect - I can give you full details on the catechism and perhaps get your input-feedback. Thanks, Kevin Allen, host, The Illumined Heart, Ancient Faith Radio. kevin@illuminedheart.org