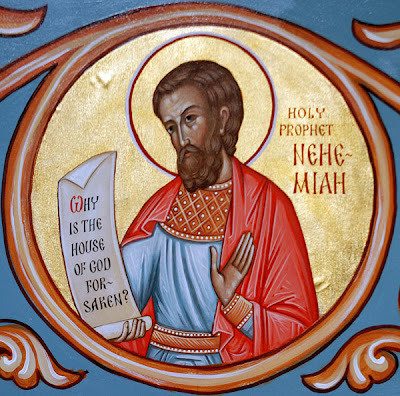 1 Esdras (Greek Έσδράς Αˊ), Greek Ezra, is an ancient Greek version of the biblical Book of Ezra in use among ancient Jewry, the early church, and many modern Christians with varying degrees of canonicity and a high historical usefulness.

In all, 1 Esdras includes 99 more verses than the newer Masoretic Ezra. These lie almost entirely in one section and serve a literary purpose; one other, short passage is in a different position. Modern texts continue with the last two short chapters of the preceding biblical work, 2 Chronicles. Thus like Ezra, it is used as evidence for a once larger Chronicles-Ezra that has since been split canonically.

The historical importance of this version of Ezra is that ancients such as the Jewish Josephus and the Christian Church Fathers quoted 1 Esdras extensively as Scripture. Moreover, it was grouped with the Canon of The Old Testament

; for example, it is found in Origen's Hexapla

. As a part of the Septuagint translation of the Old Testament, it is regarded as canonical in the churches of the East, but regarded with a less lofty view among modern Jews and the Zionist churches of the West who recently began to exclude it from their canons.

1 Esdras 2:15-30a flashes forward to Artaxerxes' reign, when the book ends. Following this prolepsis is the core of 1 Esdras, arranged in a beautiful literary chiasm around the celebration in Jerusalem at the exiles’ return. This arrangement is possible only with the material not found in Ezra (1 Esd. 2:30b — 5:1-6). These verses are the core of the chiasm, critical to the book's purpose and structure. Not only are these verses the core of the chiasm, but they fit the events in history, in the reigns of Cyrus the Great, Darius the Great, and Artaxerxes I. Because of their importance, the two books Ezra and Nehemiah may once have formed separate books, rather than a single Ezra-Nehemiah. Indeed some scholars, such as W. F. Albright and Edwin M. Yamauchi, believe that Nehemiah came back to Jerusalem before Ezra.

Scholars believe that this work may have been the original, or at least the more authoritative; the variances that are contained in this work are so striking that more research is being conducted. Furthermore, there is disagreement as to what the original language of the work was, Greek, Aramaic, or Hebrew. Because of similarities to the vocabulary in the Book of Daniel, it is presumed by some that the authors came from Lower Egypt and some or all may have even had a hand in the translation of Daniel. Assuming this theory is correct, many scholars consider the possibility that one "chronicler" wrote this book.

Josephus makes use of the book and some scholars believe that the composition is likely to have taken place in the first century BC. Many newer Protestant and Roman Catholic scholars assign no historical value to the "original" sections of the book. The citations of the other books of the Bible, however, provide an early alternative to the Septuagint for those texts, which increases its value to scholars.

In the current Greek texts, the book breaks off in the middle of a sentence; that particular verse thus had to be reconstructed from an early Latin translation. However, it is generally presumed that the original work extended to the Feast of Tabernacles, as described in Nehemiah 8:13-18. An additional difficulty with the text is the lack of order in the historical sequence of events. Artaxerxes is mentioned before Darius, who is mentioned before Cyrus. (Such jumbling of the order of events, however, is also suspected by some authors to exist in Masoretic Ezra and Nehemiah.) This double naming is corrected by Josephus in The Antiquities of the Jews

Book 11 chapter 2 where we find that the name of the above mentioned Artaxerxes is called Cambyses.

The book was widely quoted by early Christian authors and it found a place in Origen's Hexapla. It was not included in later canons of the Western Church, and Clement VIII relegated it to an appendix following the New Testament in the Vulgate "lest [it] perish entirely". However, the use of the book continued in the Eastern Church, and it remains a part of the original Eastern Orthodox canon.

The book normally called 1 Esdras is numbered differently among various versions of the Bible. In most editions of the Septuagint