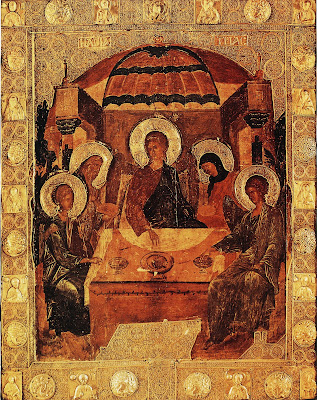 Sarah Hebrew: שָׂרָה, Latin: Sara; Arabic: سارة) was the wife of Abraham and the mother of Isaac as described in the Hebrew Bible and the Quran. Her name was originally Sarai. According to Genesis 17:15 God changed her name to Sarah as part of a covenant after Hagar bore Abraham his first son, Ishmael.

The Hebrew name Sarah indicates a woman of high rank and is sometimes translated as "princess". It also means "lady."

Sarah was the wife of Abraham, as well as being his half-sister, the daughter of his father Terah (Genesis 20:12). The Talmud identifies Sarai with Iscah, daughter of Abraham's deceased brother Haran (Genesis 11:29), so that Sarah turns out to be the niece of Abraham and the sister of Lot and Milcah. She was considered beautiful to the point that Abraham feared that when they were near more powerful rulers she would be taken away and given to another man. Twice he purposefully identified her as being only his sister so that he would be "treated well" for her sake. It is apparent that she remained attractive into her later years. Despite her great beauty, she was barren for an unknown reason. She was originally called "Sarai" which is translated "my princess." Later she was called "Sarah" i.e., princess." In Biblical times, the changing of one's name was significant and used to symbolize the binding of a covenant. In this case, God promised to put an end to her barrenness and give her a child (Isaac).

On the journey to Egypt, Abraham hid his wife in a chest in order that no one might see her. At the frontier the chest had to pass through the hands of certain officials, who insisted on examining its contents in order to determine the amount of duty payable. When it was opened a bright light proceeded from Sarai's beauty. Every one of the officials wished to secure possession of her, each offering a higher sum than his rival. When brought before Pharaoh, Sarai said that Abraham was her brother, and the king thereupon bestowed upon the latter many presents and marks of distinction ("Sefer ha-Yashar," l.c.). As a token of his love for Sarai the king deeded his entire property to her, and gave her the land of Goshen as her hereditary possession: for this reason the Israelites subsequently lived in that land (Pirḳe R. El. xxxvi.). It is likely that she acquired her Egyptian maidservant Hagar during this stay. Sarai prayed to God to deliver her from the king, and He thereupon sent an angel, who struck Pharaoh whenever he attempted to touch her. Pharaoh was so astonished at these blows that he spoke kindly to Sarai, who confessed that she was Abraham's wife. The king then ceased to annoy her ("Sefer ha-Yashar," l.c.). According to another version, Pharaoh persisted in annoying her after she had told him that she was a married woman; thereupon the angel struck him so violently that he became ill, and was thereby prevented from continuing to trouble her (Genesis Rabbah xli. 2). According to one tradition it was when Pharaoh saw these miracles wrought in Sarai's behalf that he gave her his daughter Hagar as slave, saying: "It is better that my daughter should be a slave in the house of such a woman than mistress in another house"; Abimelech acted likewise (Genesis Rabbah xlv. 2). Sarai treated Hagar well, and induced women who came to visit her to visit Hagar also. Hagar, when pregnant by Abraham, began to act superciliously toward Sarai, provoking the latter to treat her harshly, to impose heavy work upon her, and even to strike her (ib. xlv. 9).

Some believe Sarai was originally destined to reach the age of 175 years, but forty-eight years of this span of life were taken away from her because she complained of Abraham, blaming him as though the cause that Hagar no longer respected her (R. H. 16b; Genesis Rabbah xlv. 7). Sarah was sterile; but a miracle was vouchsafed to her (Genesis Rabbah xlvii. 3) after her name was changed from "Sarai" to "Sarah" (R. H. 16b). According to one myth, when her fertility had been restored and she had given birth to Isaac, the people would not believe in the miracle, saying that the patriarch and his wife had adopted a foundling and pretended that it was their own son. Abraham thereupon invited all the notabilities to a banquet on the day when Isaac was to be weaned. Sarah invited the women, also, who brought their infants with them; and on this occasion she gave milk from her breasts to all the strange children, thus convincing the guests of the miracle (B. M. 87a; comp. Gen. R. liii. 13). None of this is Biblical, however, except for the fact that Abraham organized a celebration when Isaac was weaned. It was during this banquet that Sarah happened upon the then teenaged Ishmael "mocking" her son and was so disturbed that she requested that both he and Hagar be removed from their company.

Legends connect Sarah's death with the attempted sacrifice of Isaac, there being two versions of the story. According to one, Samael came to her and said: "Your old husband seized the boy and sacrificed him. The boy wailed and wept; but he could not escape from his father." Sarah began to cry bitterly, and ultimately died of her grief. According to the other legend, Satan, disguised as an old man, came to Sarah and told her that Isaac had been sacrificed. She, believing it to be true, cried bitterly, but soon comforted herself with the thought that the sacrifice had been offered at the command of God. She started from Beer-sheba to Hebron, asking everyone she met if he knew in which direction Abraham had gone. Then Satan came again in human shape and told her that it was not true that Isaac had been sacrificed, but that he was living and would soon return with his father. Sarah, on hearing this, died of joy at Hebron. Abraham and Isaac returned to their home at Beer-sheba, and, not finding Sarah there, went to Hebron, where they discovered her dead. According to the Genesis Rabba, during Sarah's lifetime her house was always hospitably open, the dough was miraculously increased, a light burned from Saturday evening to Saturday evening, and a pillar of cloud rested upon the entrance to her tent.

The First Epistle of Peter praises Sarah for obeying her husband. Other New Testament references to Sarah are in Romans, Galatians and Hebrews.

In Islam, Sarah was the wife of the patriarch and Islamic prophet Abraham and the mother of the prophet Isaac is an honoured woman in the Islamic faith. According to Muslim belief, she was Abraham's first wife. Although not mentioned by name in the Qur'an, she is referenced and alluded to via the story of her husband. She lived with Abraham throughout her life and, although she was barren, God promised her the birth of a prophetic son, Isaac.

Muslim tradition holds that Sarah and Abraham had no children. Abraham, however, prayed constantly to God for a son. Sarah, being barren, subsequently gave him her Egyptian handmaiden, Hājar (Hagar), to wed as his second wife. Hagar bore Ismā'īl (Ishmael), when Abraham was 86. Thirteen years later, God announced to Abraham, now a hundred, that barren Sarah would give birth to a second son, Isaac, who would also be a prophet of the Lord. Although the Qur'an does not mention Sarah by name, it mentions the annunciation of the birth of Isaac. The Qur'an mentions that Sarah laughed when the angels gave her the glad tidings of Isaac, which is perhaps why the name Isaac has the root meaning of 'laughter'.


There came Our messengers to Abraham with glad tidings. They said, 'Peace!' He answered, 'Peace!' and hastened to entertain them with a roasted calf.
But when he saw their hands went not towards the (meal), he felt some mistrust of them, and conceived a fear of them. They said: "Fear not: We have been sent against the people of Lut.
And his wife was standing (there), and she laughed: But we gave her glad tidings of Isaac, and after him, of Jacob.
She said: "Alas for me! shall I bear a child, seeing I am an old woman, and my husband here is an old man? That would indeed be a wonderful thing!"
—Qur'an, Sura 11 (Hud), ayat 69-72

Sarah is believed to be buried in the Cave of the Patriarchs (known by Muslims as the Sanctuary of Abraham). The compound, located in the ancient city of Hebron, is the second holiest site for Jews (after the Temple Mount in Jerusalem), and is also venerated by Christians and Muslims, both of whom have traditions which maintain that the site is the burial place of three Biblical couples: Abraham and Sarah, Isaac and Rebecca, and Jacob and Leah. According to the book of Genesis, Abraham purchased the plot of land for her tomb from a man named Ephron the Hittite.