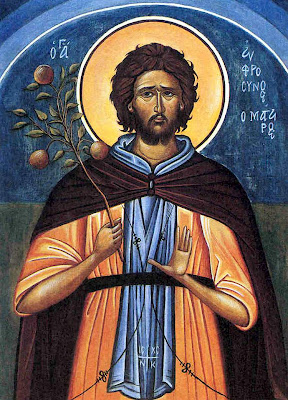 It is said that there are two things most Greek cooks do not go anywhere without: a knife and an icon of St. Euphrosynos.

For Orthodox, however, the depiction of the "Last Supper" is more appropriately called the "Mystical Supper", since it was primarily a liturgical event which is often reserved for depiction in the Holy Altar area of a church.

It is worth noting, since St. Euphrosynos was an Orthodox monastic on Mount Athos, that tall white chef hats (toque blanche), according to many, have their origins in the black tall hats (kalimavkion) of Greek Orthodox monastics. It is said that in the middle ages, Greek monks who prepared food in the monasteries wore tall white hats so that they could be distinguished from the normal monks who wore tall black hats.

Hagiography by Saint Dimitri of Rostov
Our holy monastic father Euphrosynos was born of simple parents although he surpassed even those of noble lineage in good works. For there are many who are devoid of good works, despite their noble birth, and so are cast down into Hades while the simple in their humility are lifted up to paradise by God as was the godly Euphrosynos. Because of his virtuous life he was translated to paradise, as we will see, and was shown to be an inhabitant there. Euphrosynos lived in a monastery where he served the brethren, laboring in the kitchen and serving them with great humility and submissiveness as though they were not men but God Himself.

He labored in obedience day and night, but he never left off praying and fasting. His patience was inexpressible. He bore much abuse and disparagement and suffered frequent vexations. Scorched by the material fire of the cookstove, he was warmed by the spiritual fire of the love of God, and his heart burned with longing for the Lord. While passing his days preparing food for the brethren, he at the same time prepared a table for himself in the kingdom of God by his virtuous life, where he would eat his fill with those of whom it is said, Blessed is he that shall eat bread in the kingdom of God. He served the Lord secretly so that he might be rewarded by Him openly, even as it came to pass.

The Lord’s reward to His servant was made manifest in the following manner. A certain priest who lived in the same monastery prayed fervently to the Lord that He reveal to him the things which are prepared for them that love Him. One night he had a vision. It seemed to him that he was standing in a garden, and as he considered the unutterable beauty of this garden, he saw Euphrosynos, the monastery’s cook, walking by.

The priest approached him and asked, "Brother Euphrosynos, what is this place? Can this be paradise?"

"It is paradise, Father," answered Euphrosynos.

Again the priest inquired, "How is that you are here?"

Euphrosynos the cook replied, "This is the dwelling place of God’s elect, and by God’s great goodness I have made my abode here as well."

The priest asked, "Do you have authority over all these beautiful things?"

Euphrosynos replied, "As far as I am able, I distribute to others the things you see here."

The priest inquired, "Can you give me some portion of these things?"

"By the grace of my God, take what you desire," Euphrosynos said.

The priest then pointed to some apples and asked for them. Euphrosynos took three apples, placed them in a kerchief, and gave them to the priest, saying, "Take what you have requested and delight therein."

At that moment, the semantron was struck for Matins, and the priest awoke and came to himself. He thought that he had been dreaming, but when he stretched out his hand to pick up his handkerchief, he found in it the three apples that he had received from Euphrosynos in the vision. They gave off an ineffable fragrance. Amazed, he arose from his couch, placed the apples on the bed, and went to church where he found Euphrosynos standing together with the brethren at the morning service.

Approaching Euphrosynos, the priest implored him to reveal where he had been that night. Euphrosynos replied, "Forgive me, Father; I have been in that place where we saw one another."

The priest said, "You must reveal God’s greatness, so that the truth is not concealed!"

But the wise Euphrosynos humbly answered, "You, Father, implored the Lord to reveal to you the reward given to His chosen. The Lord was pleased to make this known to your godliness through me, wretched and unworthy as I am, and thus, we found ourselves together in paradise."

The priest inquired, "What did you give me, Father, in paradise when I spoke with you?"

"I gave you the three fragrant apples which you have placed on your bed in your cell," answered Euphrosynos.

When Matins had finished, the priest summoned the brethren and showed them the three apples from paradise, and he told them exactly what had occurred. All smelled the ineffable fragrance emitted by those apples and discerned their spiritual sweetness, and they marvelled at what they were told by the priest. They hurried to the kitchen to reverence the servant of God, but they could not find him.

When Euphrosynos left the church, he hid from the glory of men, and no one knew where he had gone. It is pointless to inquire into his whereabouts, for if he had access to paradise, where could he not have hidden himself? The brethren divided the apples among themselves and distributed pieces of them as a blessing to many, especially to those who were in need of healing. Whoever ate of these apples was healed of his infirmities, and thus, all received great benefit from the holy and venerable Euphrosynos. The account of the vision was written down not only on scrolls but also in the hearts of those who were told of it, and all who heard thereof strove to increase their labors and please God. By the prayers of the venerable Euphrosynos, may the Lord deem us also worthy to dwell in paradise. Amen.

Apolytikion in the Fourth Tone
You lived in great humility, in labors of asceticism and in purity of soul, O righteous Euphrosynos. By a mystical vision you demonstrated the Heavenly joy which you had found. Therefore make us worthy to be partakers of your intercessions.