Apotheosis in Religions of the World 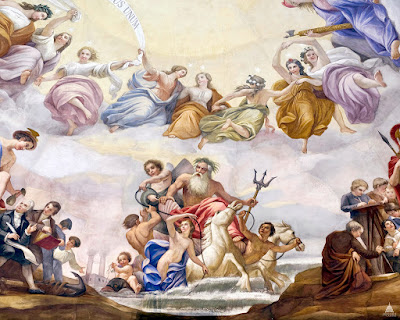 In theology, the term apotheosis refers to the idea that an individual has been raised to godlike stature. In art, the term refers to the treatment of any subject (a figure, group, locale, motif, convention or melody) in a particularly grand or exalted manner.

Prior to the Hellenistic period, imperial cults were known in Ancient Egypt (pharaohs) and Mesopotamia (since Naram-Sin). From the New Kingdom, all deceased pharaohs were deified as Osiris.

From at least the Geometric period of the ninth century BC, the long-deceased heroes linked with founding myths of Greek sites were accorded chthonic rites in their heroon, or "hero-temple".

In the Greek world, the first leader who accorded himself divine honours was Philip II of Macedon, who was a king, when the Greeks had set kingship aside, and who had extensive economic and military ties, though largely antagonistic, with Achaemenid Persia, where kings were divine. At his wedding to his sixth wife, Philip's enthroned image was carried in procession among the Olympian gods; "his example at Aigai became a custom, passing to the Macedonian kings who were later worshipped in Greek Asia, from them to Julius Caesar and so to the emperors of Rome". Such Hellenistic state leaders might be raised to a status equal to the gods before death (e.g., Alexander the Great) or afterwards (e.g., members of the Ptolemaic dynasty). Heroic cult similar to apotheosis was also an honour given to a few revered artists of the distant past, notably Homer.

Archaic and Classical Greek hero-cults became primarily civic, extended from their familial origins, in the sixth century; by the fifth century none of the worshipers based their authority by tracing descent back to the hero, with the exception of some families who inherited particular priestly cult, such as the Eumolpides (descended from Eumolpus) of the Eleusinian mysteries, and some inherited priesthoods at oracle sites. The Greek hero cults can be distinguished on the other hand from the Roman cult of dead emperors, because the hero was not thought of as having ascended to Olympus or become a god: he was beneath the earth, and his power purely local. For this reason hero cults were chthonic in nature, and their rituals more closely resembled those for Hecate and Persephone than those for Zeus and Apollo. Two exceptions were Heracles and Asclepius, who might be honored as either gods or heroes, sometimes by chthonic night-time rites and sacrifice on the following day.

Apotheosis in ancient Rome was a process whereby a deceased ruler was recognized as having been divine by his successor, usually also by a decree of the Senate and popular consent. In addition to showing respect, often the present ruler deified a popular predecessor to legitimize himself and gain popularity with the people. The upper-class did not always take part in the imperial cult, and some privately ridiculed the apotheosis of inept and feeble emperors, as in the satire The Pumpkinification of (the Divine) Claudius, usually attributed to Seneca. At the height of the imperial cult during the Roman Empire, sometimes the emperor's deceased loved ones—heirs, empresses, or lovers, as Hadrian's Antinous—were deified as well. Deified people were awarded posthumously the title Divus (Diva if women) to their names to signify their divinity. Traditional Roman religion distinguished between a deus (god) and a divus (a mortal who became divine or deified), though not consistently. Temples and columns were sometimes erected to provide a space for worship.

The Chinese Ming dynasty epic Investiture of the Gods

deals heavily with deification legends. Numerous mortals have been deified into the Daoist pantheon, such as Guan Yu, Iron-crutch Li and Fan Kuai. Song Dynasty General Yue Fei was deified during the Ming Dynasty and is considered by some practitioners to be one of the three highest ranking heavenly generals.

Various Hindu and Buddhist rulers in the past have been represented as deities, especially after death, from Thailand to Indonesia. Even several Sultans of Yogyakarta were semi-deified, posthumously.

Instead of the word "apotheosis", Christian theology uses in English the words "deification" or "divinization" or the Greek word "theosis". Traditional mainstream theology, both East and West, views Jesus Christ as the pre-existing God who undertook mortal existence, not as a mortal being who attained divinity. It holds that he has made it possible for human beings to be raised to the level of sharing the divine nature: he became one of us to make us "partakers of the divine nature." "For this is why the Word became man, and the Son of God became the Son of man: so that man, by entering into communion with the Word and thus receiving divine sonship, might become a son of God." "For the Son of God became man so that we might become God." "The only-begotten Son of God, wanting to make us sharers in his divinity, assumed our nature, so that he, made man, might make men gods."

Christian theology traditionally makes a distinction between "theosis" and "apotheosis". Orthodox Trinitarian Christianity views Jesus Christ as the pre-existing God who undertook mortal existence, not a mortal being who attained divinity. Regarding human beings, the mystical theology of the Eastern Orthodox churches and Eastern Catholic churches characteristically describes the situation as "theosis", a Greek word.

Corresponding to the Greek word theosis are the Latin-derived words "divinization" and "deification" used in the parts of the Catholic Church that are of Latin tradition. The concept has been given less prominence in Western theology than in that of the Eastern Catholic Churches, but is present in the Latin Church's liturgical prayers, such as that of the deacon or priest when pouring wine and a little water into the chalice: "By the mystery of this water and wine may we come to share in the divinity of Christ who humbled himself to share in our humanity." The Catechism of the Catholic Church quotes with approval Saint Augustine's saying, "The Son of God became man so that we might become God."

Catholic theology stresses the concept of supernatural life, "a new creation and elevation, a rebirth, it is a participation in and partaking of the divine nature" (cf. 2 Peter 1:4). In Catholic teaching there is a vital distinction between natural life and supernatural life, the latter being "the life that God, in an act of love, freely gives to human beings to elevate them above their natural lives" and which they receive through prayer and the sacraments; indeed the Catholic Church sees human existence as having as its whole purpose the acquisition, preservation and intensification of this supernatural life.