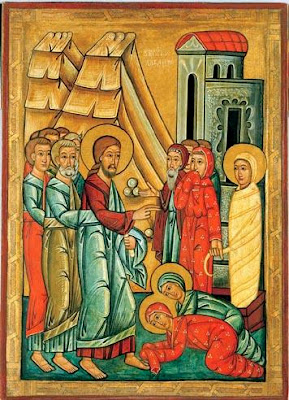 Lazarus Saturday, in the Orthodox Church and those Eastern Catholic Churches which follow the Byzantine Rite, is the day before Palm Sunday, and is liturgically linked to it. The feast celebrates the resurrection of Lazarus of Bethany, the narrative of which is found in the New Testament Gospel of John (John 11:1-45). It is the first day of Holy Week.

Lazarus Saturday and Palm Sunday together hold a unique position in the church year, as days of joy and triumph interposed between the penitence of Great Lent and the mourning of Holy Week.

During the preceding week, which is the last week of Great Lent, the hymns in the Lenten Triodion track the sickness and then the death of Lazarus, and Christ's journey from beyond Jordan to Bethany. This week is referred to as the "Week of Palms" or the "Flowery Week."

The position of Lazarus Saturday is perfectly summed up in the first sticheron chanted at Vespers on Friday evening:


Having completed the forty days that bring profit to our soul, we beseech Thee in Thy love for man: Grant us also to behold the Holy Week of Thy Passion, that in it we may glorify Thy mighty acts and Thine ineffable dispensation for our sakes, singing with one mind: O Lord, glory to Thee.

During the Liturgy of the Presanctified Gifts on Friday evening, the reading of Genesis (which began on the first day of Great Lent) is concluded with the description of the death, burial and mourning of Jacob (Genesis 49:33-50:26), which corresponds perfectly with the message of Lazarus Saturday, deepening the sense of sorrow and hope. On Friday night, at Compline, the Canon on the Resurrection of Lazarus by Saint Andrew of Crete is read. This is a full canon, having all nine Canticles (most canons omit the Second Canticle).
The scripture readings and hymns for Lazarus Saturday focus on the resurrection of Lazarus as a foreshadowing of the Resurrection of Christ, and a promise of the General Resurrection. The Gospel narrative is interpreted in the hymns as illustrating the two natures of Christ: his humanity in asking, "Where have ye laid him?" (John 11:34), and his divinity by commanding Lazarus to come forth from the dead (John 11:43). A number of the hymns, written in the first or second person, relate Lazarus' death, entombment and burial bonds symbolically to the individual's sinful state. Many of the Resurrectional hymns of the normal Sunday service, which are omitted on Palm Sunday, are chanted on Lazarus Saturday. However, the Litany of the Departed, which is normally forbidden at the Sunday services, is allowed. During the Divine Liturgy, the Baptismal Hymn, "As many as have been baptized into Christ have put on Christ" (Romans 6:3), is sung in place of the Trisagion. In some churches, baptism of adult converts is held on this day.

Lazarus Saturday is the day when, traditionally, hermits would leave their retreats in the wilderness to return to the monastery for the Holy Week services. In many places in the Russian Church, the vestments and church hangings on this day and on Palm Sunday are green, denoting the renewal of life. In the Greek Church, it is customary on Lazarus Saturday to plait elaborate crosses out of palm leaves which will be used on Palm Sunday.

Although the forty days of Great Lent end on the day before Lazarus Saturday, the day is still observed as a fast day, with no meat or dairy products permitted. However, the fast is somewhat mitigated, and wine and oil are permitted. In Russia, it is traditional to eat caviar on Lazarus Saturday. In the Greek Orthodox Church, spice breads called Lazarakia are made and eaten on this day.

The antiquity of this commemoration is demonstrated by the homilies of St. John Chrysostom (349 - 407), St Augustine of Hippo Regia (354 - 430), and others. In the 7th and 8th centuries, special hymns and canons for the feast were written by St. Andrew of Crete, St. Cosmas of Maium and St. John Damascene, which are still sung to this day.

According to Eastern Orthodox Church tradition, sometime after the Resurrection of Christ, Lazarus was forced to flee Judea because of rumoured plots on his life and came to Cyprus. There he was appointed by Paul and Barnabas as the first bishop of Kittim (present-day Larnaka). He lived there for thirty more years and on his death was buried there for the second and last time.

Further establishing the apostolic nature of Lazarus' appointment was the story that the bishop's pallium was presented to Lazarus by the Virgin Mary, who had woven it herself. Such apostolic connections were central to the claims to autocephaly made by the bishops of Kittim—subject to the patriarch of Jerusalem—during the period 325–413. The church of Kittim was declared (or confirmed) self-governing in 413.

According to tradition, Lazarus never smiled during the thirty years after his resurrection, worried by the sight of unredeemed souls he had seen during his four-day stay in Hades. The only exception was, when he saw someone stealing a pot, he smilingly said: "the clay steals the clay."

In 890, a tomb was found in Larnaca bearing the inscription "Lazarus the friend of Christ". Emperor Leo VI of Byzantium had Lazarus' remains transferred to Constantinople in 898. The transfer was apostrophized by Arethas, bishop of Caesarea, and is commemorated by the Orthodox Church each year on October 17.

In recompense to Larnaca, Emperor Leo had the Church of St. Lazarus, which still exists today, erected over Lazarus' tomb. The marble sarcophagus can be seen inside the church under the Holy of Holies. On November 2, 1972, human remains in a marble sarcophagus under the altar were discovered during renovation works in the church at Larnaka, and were identified as part of the saint's relics.

After the sacking of Constantinople by the Franks during the Fourth Crusade in 1204, the Roman Catholic Crusaders stole and carried the saint's relics to Marseilles, France as part of "the booty of war".

Palm Sunday is a Christian moveable feast that falls on the Sunday before Easter. The feast commemorates Jesus' triumphal entry into Jerusalem, an event mentioned in all four canonical Gospels. (Mark 11:1–11, Matthew 21:1–11, Luke 19:28–44, and John 12:12–19).

In many Christian churches, Palm Sunday is marked by the distribution of palm leaves (often tied into crosses) to the assembled worshipers. The difficulty of procuring palms for that day's ceremonies in unfavorable climates for palms led to the substitution of boughs of box, yew, willow, or other native trees. The Sunday was often designated by the names of these trees, as Willow Sunday, Yew Sunday, or Flowery Sunday.

In the accounts of the four canonical Gospels, Jesus' triumphal entry into Jerusalem takes place about a week before his Resurrection.

According to the Gospels, Jesus rode a donkey into Jerusalem, and the celebrating people there lay down their cloaks in front of him, and also lay down small branches of trees. The people sang part of Psalms 118: 25–26 – ... Blessed is He who comes in the name of the Lord. We bless you from the house of the Lord ....

The symbolism of the donkey may refer to the Eastern tradition that it is an animal of peace, versus the horse, which is the animal of war. Therefore, a king came riding upon a horse when he was bent on war and rode upon a donkey when he wanted to point out he was coming in peace. Therefore, Jesus' entry to Jerusalem symbolized his entry as the Prince of Peace, not as a war-waging king.

In many lands in the ancient Near East, it was customary to cover in some way the path of someone thought worthy of the highest honour. The Hebrew Bible (2Kings 9:13) reports that Jehu, son of Jehoshaphat, was treated this way. Both the Synoptic Gospels and the Gospel of John report that people gave Jesus this form of honour. However, in the synoptics they are only reported as laying their garments and cut rushes on the street, whereas John more specifically mentions palm fronds. The palm branch was a symbol of triumph and victory in Jewish tradition, and is treated in other parts of the Bible as such (e.g., Leviticus 23:40 and Revelation 7:9). Because of this, the scene of the crowd greeting Jesus by waving palms and carpeting his path with them and their cloaks has become symbolic and important.

In some of the Orthodox Church, Palm Sunday is often called the "Entry of the Lord into Jerusalem", is one of the Twelve Great Feasts of the liturgical year, and is the beginning of Holy Week. The day before is known as Lazarus Saturday, and commemorates the resurrection of Lazarus from the dead. Unlike the West, Palm Sunday is not considered to be a part of Lent, the Eastern Orthodox Great Fast ends on the Friday before. Lazarus Saturday, Palm Sunday and Holy Week are considered to be a separate fasting period. On Lazarus Saturday, believers often prepare palm fronds by knotting them into crosses in preparation for the procession on Sunday. The hangings and vestments in the church are changed to a festive color - gold in the Greek tradition and green in the Slavic tradition.

The Troparion of the Feast indicates the resurrection of Lazarus is a prefiguration of Jesus' own Resurrection:


O Christ our God
When Thou didst raise Lazarus from the dead before Thy Passion,
Thou didst confirm the resurrection of the universe.
Wherefore, we like children,
carry the banner of triumph and victory,
and we cry to Thee, O Conqueror of Death,
Hosanna in the highest!
Blessed is He that cometh
in the Name of the Lord.

In the Russian Orthodox Church, Ukrainian Orthodox Church, Ukrainian Catholic Church, Ruthenian Catholic Church, Polish, Bavarian and Austrian Roman Catholics, and various other Eastern European peoples, the custom developed of using pussy willow instead of palm fronds because the latter are not readily available that far north. There is no canonical requirement as to what kind of branches must be used, so some Orthodox believers use olive branches. Whatever the kind, these branches are blessed and distributed together with candles either during the All-Night Vigil on the Eve of the Feast (Saturday night), or before the Divine Liturgy on Sunday morning. The Great Entrance of the Divine Liturgy commemorates the "Entry of the Lord into Jerusalem", so the meaningfulness of this moment is punctuated on Palm Sunday as everyone stands, holding their branches and lit candles. The faithful take these branches and candles home with them after the service, and keep them in their icon corner as an evloghia (blessing).

In Russia, donkey walk processions took place in different cities, but most importantly in Novgorod and, since 1558 until 1693, in Moscow. It was prominently featured in testimonies by foreign witnesses and mentioned in contemporary Western maps of the city. The Patriarch of Moscow, representing Christ, rode on a "donkey" (actually a horse draped in white cloth); the Tsar of Russia humbly led the procession on foot. Originally, Moscow processions began inside the Kremlin and terminated at Trinity Church, now known as Saint Basil's Cathedral, but in 1658 Patriarch Nikon reversed the order of procession. Peter I, as a part of his nationalisation of the church, terminated the custom; it has been occasionally recreated in the 21st century.

In Oriental Orthodox churches, palm fronds are distributed at the front of the church at the sanctuary steps, in India the sanctuary itself having been strewn with marigolds, and the congregation proceeds through and outside the church.