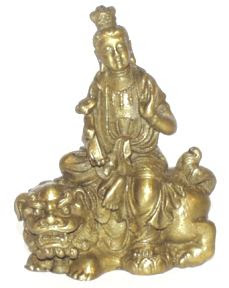 The Lhasa Apso is a hunting, non-sporting dog breed originating from Tibet. It was bred originally to guard monasteries. The Lhasa Apso was expected to follow the intruder barking until his master arrived to check on the intruder.

The Shih Tzu (traditional Chinese: 獅子狗; simplified Chinese: 狮子狗; pinyin: Shīzi Gǒu; Wade-Giles: Shih-tzu Kou; literally "Lion Dog"), is a dog breed which originated in China. The name is both singular and plural. The Shih Tzu is reported to be the oldest and smallest of the Tibetan holy dogs, its vaguely lion-like look being associated with the Snow Lion. It is also often known as the "Xi Shi Quan" (西施犬), based on the name of Xi Shi, regarded as the most beautiful woman of ancient China.

The Snowlion or Gangs Senge is a celestial animal of Tibet. It symbolizes fearlessness, unconditional cheerfulness, east and the earth element. It is one of the Four Dignities. It ranges over the mountains, and is commonly pictured as being white with a turquoise mane. In Mainland China, the Snow Lion is called a Fu Dog.

The Snow Lion resides in the East and represents unconditional cheerfulness, a mind free of doubt, clear and precise. It has a beauty and dignity resulting from a body and mind that are synchronized. The Snow Lion has a youthful, vibrant energy of goodness and a natural sense of delight. Sometimes the throne of a Buddha is depicted with eight Snowlions on it, in this case, they represent the 8 main Bodhisattva-disciples of Buddha Shakyamuni, the historical Buddha. Associations: main quality is fearlessness, dominance over mountains, and the earth element.

The roar of the Snow Lion embodies the sound of 'emptiness', courage and truth, and because of this is often a synonym for the Buddhadharma, the Buddha’s teachings, as it implies freedom from karma and the challenging call to awakening. It was considered to be so powerful that just a single roar could cause seven dragons to fall from the sky.

In Buddhism, the Snow Lion is the protector of Buddha and in paintings and sculpture is usually seen as holding up the Buddha's throne (one on the left and one on the right of the throne.)

The Chow Chow, or Chow, is a breed of dog originating from China, where it is referred to as Songshi Quan (Pinyin: sōngshī quǎn 鬆獅犬), which literally means "puffy-lion dog." It is believed that the Chow Chow is one of the native dogs used as the model for the Foo Dog, the traditional stone guardians found in front of Buddhist temples and palaces.

The Pekingese or Pekinese (Also commonly referred to as a "Lion Dog") is an ancient breed of toy dog, originating in China. They were the favored pet of the Chinese Imperial court, and the name relates to the city of Beijing where the Forbidden City resides. The breed has several characteristics and health issues related to its unique appearance. Pekingese are often mistaken for Japanese Chins, due to their strikingly similar looks.

These dogs are also called Dogs of Foo or Fu by the Chinese, and how much they are revered can be seen in the number of Chinese artworks depicting them. They were considered a guardian spirit as they resembled Chinese lions.

The most common origination story for the Pekingese is the story of The Lion and the Marmoset:

A lion and a marmoset fell in love. But the lion was too large. The lion went to the Buddha and told him of his woes. The Buddha allowed the lion to shrink down to the size of the marmoset. And the Pekingese was the result.

Because the Pekingese was believed to have originated from the Buddha, he was a temple dog. As such, he was not a mere toy. He was made small so that he could go after and destroy little demons that might infest the palace or temple. But his heart was big so that he could destroy even the largest and fiercest.

When Buddhist travelers, probably out to trade, brought stories about lions to China, Chinese sculptors modeled statues of lions after the travelers' descriptions--and after native dogs, since no one in China had seen a lion with his or her own eyes. The mythic version of the animal was originally introduced to Han China as the Buddhist protector of dharma. Gradually they were transformed into guardians of the Imperial dharma, and some Qing realizations of them came to look more like the dogs of Fo. (Compare the Chow Chow, Pekingese, Shi Tzu, Shar-Pei, and Pug breeds.) These beasts have been found in art as early as 208 BC. In the Qing Dynasty (1644-1911), the ruling Manchu derived their name from the Manjushri Buddha, who rides on a lion.

The beast is sometimes associated with feng shui or Buddhism. Fu means 'happiness' in Chinese; however, Fu Dogs are known as Rui Shi (瑞獅) ("auspicious lions").

The lions are generally present in pairs, with the female on the left and the male on the right. The male lion has his right paw on a ball, which represents the "flower of life" The female is essentially identical, but has a single cub under her left paw. Symbolically, the female fu dog protects those dwelling inside, while the male guards the structure. Sometimes the female has her mouth closed, and the male open. This symbolizes the enunciation of the sacred word "om". However, Japanese adaptions state that the male is inhaling, representing life, while the female exhales, representing death. Other styles have both lions with a single large pearl in each of their partially opened mouths. The pearl is carved so that it can roll about in the lion's mouth but sized just large enough so that it can never be removed.
at 02:36