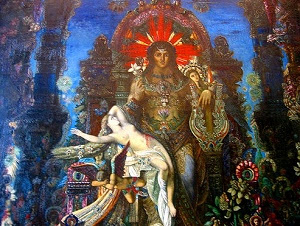 The connection between Christianity and Buddhism is unmistakable, both in terms of the traditional narratives of the respective founders, and in their parable-riddled attributed sayings. Some, particularly occultists, have attempted to explain this by proposing a residence in India by Jesus during his 'lost years,' for instance, Notovich, and the derivative work by Dowling. Arthur Lillie here examines possible historical linkages between the two religions from a critical, rationalist, viewpoint.

His theory will be thought-provoking for Buddhists and Christians alike. Lillie explores some of the same issues which John Robertson targets in Pagan Christs, particularly the evolution of sacrificial rites into symbolic forms. Lillie is also trying to open up an additional front here, by attempting to reduce much of Indian mythology to a multiplication of forms of Shiva. This is a radical view which blurs some of the efficacy of this book. He also, curiously enough, ignores the parallels between the Christ and Krishna stories, which many others have remarked on.

On the whole, this controversial thesis is an enjoyable read, and a rare attempt by a free-thinker to confront the issue of diffusion of religious concepts from India to the Near East.
at 08:44