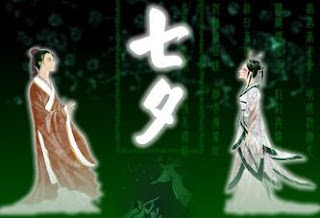 In 2008, Beijing is undoubtedly the focus of the world, because the 29th Olympic Games will be held here. It is not only a grand affair of the mankind, but also a great honor of Chinese people. We are solicitous of the advent of the Olympics and as well, we warmly welcome you to come to Beijing to appreciate the infinite glamour of the oriental ancient civilizations.

On the occasion of worldwide celebration, the coming of traditional Chinese Valentine's Day adds more festivity to the atmosphere. Double Seventh Day, the Valentine's Day in China on the seventh day of the seventh lunar month, which falls on August 7 this year, while Aug. 8 is the opening day of 2008 Beijing Olympics.

Quite mysteriously, it seems that the Olympics is destined to be connected with the Double Seventh Day, QiXi.

The indissoluble bond between the Olympics and love was tied since the first Olympic Games. In the old Greek legend, Pelops was the grandson of the Olympian Zeus, the ruler of the Olympus. He fell in love with Hippodameia, the daughter of King Oenomaus of the Elis City. A god once predicted that Oenomaus would die if his daughter had got married. Therefore, he came up with an idea that anyone who wanted to marry his daughter had to race carriages with him. Only the winner could have his dream come true. 12 warriors lost the race and also their lives. Finally, Nelops resorted to Poseidon and won the game with the magic carriage and flying horse borrowed from him. Nelops had his wish fulfilled and also became the king of the Elis City. To celebrate his victory, he launched the world famous Olympic Games.

As well, the will of perseverance lying behind the beautiful love story of Double Seventh Day happens to be similar to the Olympic spirit. The legend goes like this: Zhi Nu was the youngest of the seven daughters of the Queen Mother, while, Niu Lang was a poor orphan cowherd, driven out of his home by his sister-in-law. His only companion was an old magical cow.

Under the direction of the cow, Niu Lang successfully married the youngest fairy, Zhi Nu. They lived happily together and had two children before the Queen Mother discovered Zhi Nu's absence. Queen Mother was so annoyed that she had Zhi Nu brought back to heaven. Again, with the help of the magical cow, Niu Lang was able to follow Zhi Nu into heaven. He was about to reach his wife when the Queen showed up and pulled off her hairpin to draw a line between the two. The line became the Silver River (also called Milky Way ) in heaven.

Zhi Nu went back to the heavenly workshop, going on weaving the clouds. But she missed her husband and children across the Silver River so much that the clouds she weaved seemed sad. Their loyalty to love touched magpies, so tens of thousands magpies came to build a bridge for the Cowhand and Weaver Maid to meet each other. Finally, the Queen showed a little mercy, allowing the couple to meet each year on the 7th of the 7th lunar month on the Silver River. Then for lovers who can not be together temporarily, this day became an important festival.
at 08:08