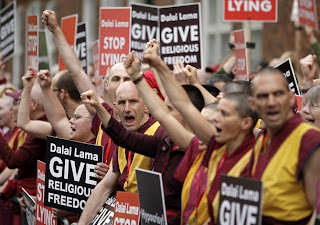 Those looking for enlightenment Saturday from the Dalai Lama at Lehigh University's Stabler Arena first had to maneuver past 400 monks and nuns protesting a 40-year-old arcane decree by the Tibetan-leader-in-exile that they said violates their religious freedom.

The monks and nuns of the Western Shugden Society weren't hard to miss. Dressed in gold and maroon robes and most of them with shaved heads, the protesters held up signs and chanted -- in Tibetan -- "Dalai Lama! Give religious freedom." And "Dalai Lama! Stop lying."

The beef between the society and the Buddhist leader centers on the worship of the deity Dorje Shugden and specifically a prayer of peace and love Buddhists have used for 400 years.

Kelsang Pema, a society spokeswoman whose given name in her native England is Helen Gladwell, said the Dalai Lama "outlawed the prayer back in the 1970s because he claimed the thousands of Shugden followers saying the prayer did physical and spiritual harm to him."

Pema suggested that non-Shugden devotees persecute those who practice Shugden to the point of throwing all Shugden monks and nuns out of their monasteries and nunneries, denying Shugden followers jobs, getting their children expelled from schools -- even burning their homes and denying them medical care.

As an example, she told of a doctor in India who was about to treat a patient suffering from tuberculosis when an anti-Shugden follower in the room attacked the doctor, beating him.

"We admit this person could have done this on his own, but the Dalai Lama does not speak out against such actions."

No one in the Dalai Lama's entourage could be reached for comment.

Many people leaving Stabler Arena after listening to the Dalai Lama said they thought the protest was to get the Chinese out of Tibet and reinstate the Dalai Lama as the true leader of that Himalayan country.

Tom Howard of Center Valley said of the Dorje Shugden disagreement, "I'd have to know more about it before I could understand it."

The Western Shugden Society composed and delivered a letter dated April 12 to the Dalai Lama asking him to give them freedom to practice Dorje Shugden; to stop discrimination against Shugden people, to allow the Shugden monks and nuns to return to their monasteries and nunneries, and to put the three points above in writing and distribute it throughout the Buddhist world.

"We haven't heard from him," Pema said. "Honestly, we don't understand why he's doing this. It's so bamboozling."

The protest was peaceful, although a line of police officers was on hand and security at the arena was tight; metal detectors were in use.
at 22:22

"...it might be wondered whether refuge might be given to followers of other religions. Such an action would be mistaken, since a follower of a theistic tradition takes refuge in his particular divinity and not in Buddha, 'the teacher of both gods and men'. The same point equally applies to the notion that, for example, one could be both a Buddhist and a Christian. Only someone for whom reason and language have neither meaning nor value could say such a thing, for there is an unbridgeable gap between the Buddhist denial of a creator and the claim, common to all theistic traditions, that such a creator actually exists. Just as both these views cannot simultaneously be right, so one cannot simultaneously be a Buddhist and a Christian."

For more information on this controversy: