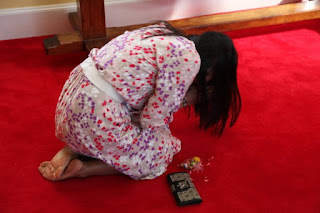 We ring the temple bell 107 times on the night before New Year’s Day and one time on New Year’s Day itself, just past midnight. There are several theories about this custom. For example, one is simply that people have 108 kinds of worldly desires and can get rid of them by ringing a bell. The other theory involves the Japanese word shikuhaku, which means "agony". It so happens that many Japanese words and sounds have several possible meanings. Ku, for example, means either "troublesome" or "nine". Shi means either "death" or "four". So if we do multiplication tables, shi (4) times ku (9) is thirty-six, and ha (8) times ku (9) is seventy-two. Then, thirty-six plus seventy-two is 108 — the number of worldly desires! By ringing the bell that many times, we hope to rid ourselves of this troublesome karma.

Here is a traditional Chinese explanation: Like the knots or beads on a Mala, the bell is considered as an auspicious article in Chinese tradition. At great ceremonies, the temple bell is rung typically 108 times to begin the celebration. There are 12 months, 24 solar terms and 72 hours on the Chinese lunar calendar, 108 in all. According to Buddhist custom, people have 108 worries which are said to be removed by the bell. The bell-ringing at mid-night of New Year's would captivate many people as its echo carries around the vicinity, whether one is close by or just heard it via broadcast.
at 23:19