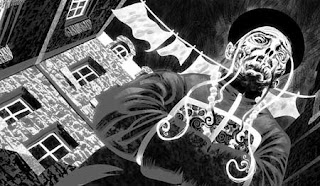 Jiang Shi (simplified Chinese: 僵尸; traditional Chinese: 僵屍 or; pinyin: jiāngshī; literally "stiff corpse") are reanimated corpses that hop around, killing living creatures to absorb life essence (气/氣qì) from their victims. Jiāngshī is pronounced gœngsi in Cantonese, or kyonshi in Japanese. They are said to be created when a person's soul (魄 pò) fails to leave the deceased's body, due to improper death, suicide, or just wanting to cause trouble.

Generally their appearance can range from plain ordinary (as in the case of a recently deceased person) to downright horrifying (i.e. rotting flesh, stiffness, rigor mortis, the like commonly associated with corpses that have been in a state of decay over a period of time). A peculiar feature is their greenish-white furry skin; one theory is this is derived from fungus or mold growing on corpses. They are said to have long white hair all over their heads. The influence of Western Christian vampire stories brought the blood-sucking aspect to the Chinese myth in modern times. The mentioned term 'stiff corpse' alludes to the large phallic erection it has when it is absorbing the soul of a virgin of the opposite sex.

A supposed source of the jiang shi stories came from the folk practice of "Traveling a Corpse over a Thousand Li" (千里行屍), where traveling companions or family members who could not afford wagons or had very little money would hire Taoist priests to transport corpses of their friends/family members who died far away from home over long distances by teaching them to hop on their own feet back to their hometown for proper burial. Taoist priests would transport the corpses only at night and would ring bells to notify other pedestrians of their presence because it was considered bad luck for a living person to set eyes upon a jiang shi. This practice (湘西趕屍) was popular in Xiangxi where many people left their hometown to work elsewhere. After they died, their corpses were transported back to their rural hometown using long bamboo rods, believing they would be homesick if buried somewhere unfamiliar. When the bamboo flexed up and down, the corpses appeared to be hopping in unison from a distance. Once it was a myth. Some people speculate that the stories about jiang shi was originally made up by smugglers who disguised their illegal activities as corpse transportation and wanted to scare off law enforcement officers.

They are sometimes called Chinese vampires by Westerners, despite the fact that unlike vampires, most jiang shi usually have no self-awareness, consciousness or independent thought.

Supposedly jiang shi can be put to sleep by putting a piece of yellow paper with a spell written on it on their foreheads (Chinese talisman or 符, pinyin: fú) and they can be evaded by holding one's breath, as they track living creatures by detecting their breathing. It is also the conventional wisdom of feng shui in Chinese architecture that a threshold (simplified Chinese: 门槛; traditional Chinese: 門檻; pinyin: ménkàn), a piece of wood approximately 15 cm (6 in) high, be installed along the width of the door at the bottom to prevent a jiang shi from entering the household. When uncooked grains or rice thrown in the path of a jiang shi, the jiang shi will stop and count the grains of rice. Sticky rice is believed to draw the evil spirit of the jiang shi out. Other items used to repel jiang shi include chicken's eggs (whereas duck's eggs are ineffective), and the blood of a black dog.