FengHuang, the Vermilion Bird of the South, the Chinese Phoenix 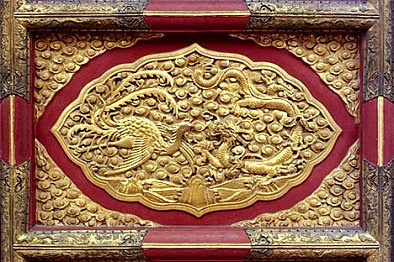 The phoenix (Ancient Greek: Φοῖνιξ, phoínix, Persian: ققنوس, Arabic: العنقاء) is a mythical sacred firebird that can be found in the mythologies of the Persians, Greeks, Romans, Egyptians, Chinese, and (according to Sanchuniathon) Phoenicians.

The phoenix originated in ancient times and has gone through a variety of representations in art/literature. Typically, it is considered benevolent, but some tales suggest that humans are not always safe around it. Further, many tales share elements with those of the phoenix.

Flavius Philostratus (c. AD 170), who wrote the biography Life of Apollonius of Tyana, refers to the phoenix as a bird living in India, but sometimes migrating to Egypt every five hundred years. His account is clearly inspired by Garuda, the bird of the Hindu god Vishnu. He considered the bird as an emanation of sunlight, being in appearance and size much like an eagle. His contemporary Lactantius is probably the author who wrote the longest poem on the famous bird. Although descriptions (and life-span) vary, the Egyptian phoenix (Bennu bird) became popular in early Catholic art, literature and Catholic symbolism, as a symbol of Christ representing his resurrection, immortality, and life-after-death. One of the Early Catholic Church Fathers, Clement, related the following regarding the Phoenix in chapter 25 of the First Epistle of Clement:


Let us consider that wonderful sign [of the resurrection] which takes place in Eastern lands, that is, in Arabia and the countries round about. There is a certain bird which is called a phoenix. This is the only one of its kind, and lives five hundred years. And when the time of its dissolution draws near that it must die, it builds itself a nest of frankincense, and myrrh, and other spices, into which, when the time is fulfilled, it enters and dies. But as the flesh decays a certain kind of worm is produced, which, being nourished by the juices of the dead bird, brings forth feathers. Then, when it has acquired strength, it takes up that nest in which are the bones of its parent, and bearing these it passes from the land of Arabia into Egypt, to the city called Heliopolis. And, in open day, flying in the sight of all men, it places them on the altar of the sun, and having done this, hastens back to its former abode. The priests then inspect the registers of the dates, and find that it has returned exactly as the five hundredth year was completed.

Michael W. Holmes points out that early Christian writers justified their use of this myth because the word appears in Psalm 92:12 [LXX Psalm 91:13], but in that passage it actually refers to a palm tree, not a mythological bird. However, it was the flourishing of Christian Hebraist interpretations of Job 29:18 that brought the Joban phoenix to life for Christian readers of the seventeenth century. At the heart of these interpretations is the proliferation of richly complementary meanings that turn upon three translations of the word chol (חול) — as phoenix, palm tree, or sand — in Job 29:18.

In critical editions of English translations of I Clement, it is also noted that the story of the phoenix, with variations, is also found in Herodotus (ii. 73), Pliny (Nat. Hist. x.2), and used as above by Tertullian (De Resurrectione Carnis, §13) and other Church Fathers.

Originally, the phoenix was identified by the Egyptians as a stork or heron-like bird called a benu, known from the Book of the Dead and other Egyptian texts as one of the sacred symbols of worship at Heliopolis, closely associated with the rising sun and the Egyptian sun-god Ra.

The Greeks subsequently pictured the bird more like a peacock or an eagle and identified it with their own word phoenix (Φοίνιξ), meaning the color purple-red or crimson (cf. Phoenicia) or a palm tree. According to the Greek mythology the phoenix lived in Phoenicia next to a well. At dawn, it bathed in the water of the well, and the Greek sun-god Helios stopped his chariot (the sun) in order to listen to its song. Featured in the painting Heracles Strangles Snakes (House of the Vettii, Pompeii Italy) as Zeus, the king of the gods. Herodotus spoke about the unique capabity of the bird to be consumed in the flames and be reborn from the ashes.

Fenghuang are mythological birds of East Asia that reign over all other birds. The males are called Feng and the females Huang. In modern times, however, such a distinction of gender is often no longer made and the Feng and Huang are blurred into a single feminine entity so that the bird can be paired with the Chinese dragon, which has male connotations.

The Fenghuang is also called the "August Rooster" (traditional Chinese: 鶤雞; pinyin: kūnjī) since it sometimes takes the place of the Rooster in the Chinese Zodiac. In the West, it is commonly referred to as the Chinese phoenix or simply Phoenix. Fenghuang Ancient City is an ancient community in Hunan Province.

A common depiction was of it attacking snakes with its talons and its wings spread. According to scripture Erya - chapter 17 Shiniao, Fenghuang is said to be made up of the beak of a rooster, the face of a swallow, the forehead of a fowl, the neck of a snake, the breast of a goose, the back of a tortoise, the hindquarters of a stag and the tail of a fish.[1] Today, however, it is often described as a composite of many birds including the head of a golden pheasant, the body of a mandarin duck, the tail of a peacock, the legs of a crane, the mouth of a parrot, and the wings of a swallow.

Its body symbolizes the six celestial bodies. The head is the sky, the eyes are the sun, the back is the moon, the wings are the wind, the feet are the earth, and the tail is the planets. Its feathers contain the five fundamental colors: black, white, red, blue and yellow. It is also sometimes depicted as having three legs.

Chinese traditions cites it as living atop the Kunlun Mountains in northern China.

Images of an ancient bird have appeared in China for over 4,000 years, the earliest as Shang Dynasty pottery motifs, then appearing decorating bronzes, as well as jade figurines (many consider the most beautiful from the Liao Period). Some believe they may have been a good-luck totem, believing that it is a totem of eastern tribes in ancient China. Current theories suggest that it is likely based in part - for example the snake-like neck - on folk memory of the Asian Ostrich which was common in prehistoric China but became extinct several thousand years ago. That this bird was well-known to the early modern humans in Asia, noted for its peculiarity, and hunted for food, is attested by numerous archaeological finds, such as pottery decorated with what appear to be painted ostriches, and bones by early campsites.

Fenghuang seems to have no connection with the phoenix of the Western world, which derives from Egyptian mythology. Peculiarly, the Egyptian phoenix may also in part reference a prehistoric bird, the Bennu Heron. Unlike the Fenghuang, which is a chimera not very much like any one extant bird, the Egyptian phoenix is most often considered similar to a heron or eagle.
During the Han Dynasty (2,200 years ago) two phoenixes, one a male (feng, 鳳) and the other a female (huang, 凰) were often shown together facing one other. Later, during the Yuan Dynasty the two terms were merged to become the generally translated "phoenix", but the "King of Birds" came to symbolize the Empress when paired with a dragon as a dragon represented the Emperor. From the period of the Jiajing Emperor (1522–66) on, a pair of phoenixes was differentiated by the tail feathers of the two birds (typically together forming a closed circle pattern—the male identified by five serrated tail feathers (five being an odd, or yang number) and the female by what appears to be one, but is in fact, two (two being an even, or yin number) curling or tendrilled tail feathers. It was also in the Ming Dynasty that phoenixes first began to appear with combs, hence comb-less phoenixes are pre-Ming, and phoenixes depicted with combs, Ming or post-Ming.

Also during this period, the feng huang was used as a symbol representing the direction south. This was portrayed through a male and female facing each other. Their feathers were of the five fundamental colors: black, white, red, green, and yellow. These colors are said to represent the Confucian virtues of: loyalty, honesty, decorum, and justice.

The phoenix represented power sent from the heavens to the Empress. If a phoenix was used to decorate a house it symbolized that loyalty and honesty were in the people that lived there. Or alternatively, phoenix only stays when the ruler is without darkness and corruption (政治清明).

The Fenghuang has very positive connotations. It is a symbol of high virtue and grace. The Fenghuang also symbolizes the union of yin and yang. Shan Hai Jing - chapter 1 Nanshan jing records each part of Fenghuang's body symbolizes a word, the head represents virtue (德), the wing represents duty (義), the back represents propriety (禮), the abdomen says belief (信) and the chest represents mercy (仁).

In ancient and modern Chinese culture, they can often be found in the decorations for weddings or royalty, along with dragons. This is because the Chinese considered the dragon and phoenix symbolic of blissful relations between husband and wife, another common yin and yang metaphor.
In some traditions it appears in good times but hides during times of trouble, while in other traditions it appeared only to mark the beginning of a new era. In China and Japan it was a symbol of the imperial house, and it represented "fire, the sun, justice, obedience, and fidelity".

The Vermilion bird is one of the Four Symbols of the Chinese constellations. According to Wu Xing, the Taoist five-elemental system, it represents the fire-element, the direction south, and the season summer correspondingly. Thus it is sometimes called the Vermilion bird of the South (南方朱雀, Nán Fāng Zhū Què) and it is also known as Suzaku in Japan, Jujak in Korea and Chu Tước in Vietnam. It is often mistaken for the Fenghuang due to similarities in appearance, but the two are different creatures. The Fenghuang (Similar to the phoenix in western mythologies) are legendary ruler of birds associated with the Chinese Empress in the same way the dragon is associated with the Emperor, while the Vermilion Bird is a mythological spirit creature of the Chinese constellations.

Like the other Four Symbols, the Vermilion Bird corresponds to seven "mansions", or positions, of the moon.
The Vermilion bird is an elegant and noble bird in both appearance and behavior, it is very selective in what it eats and where it perches, with its feathers in many different hues of reddish orange.
at 00:20

Wonderful article. I identify with the Phoenix. :-)