Headcoverings in Judaism, Christianity, and Islam 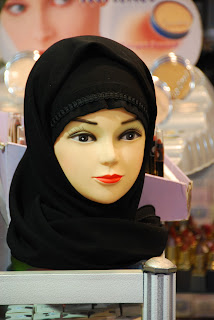 The Christian headcovering is a veiling worn by various Christian women from a variety of traditions. Some cover only in church or while praying; others cover their heads all the time. They refer to 1 Corinthians 11, or to custom, as the basis for their practice. Many contemporary Christians, however, see no need for this practice.

During the ensuing centuries, women definitely wore the head coverings during the church service, especially when praying or prophesying (1Corinthians 11:5). At different points in history, the style of the covering varied.

The requirement that women cover their heads in church is a universal law for the Latin Rite of the Catholic Church with canon 1262 of its first Code of Canon Law in 1917.

Among the early Protestant reformers, Martin Luther's wife, Katherine, wore a headcovering and John Knox and John Calvin both called for women to wear headcoverings. Other commentators who have advocated headcovering include Matthew Henry, A. R. Fausset, A. T. Robertson, Harry A. Ironside, and Charles Caldwell Ryrie.

Headcovering, at least during worship services, is still promoted or required in a few denominations and among the more traditional Orthodox and Catholics. Some Anabaptist denominations, including the Amish, some Mennonites, the Old German Baptist Brethren, the Hutterites, and the Apostolic Christian Church; some Pentecostal churches, such as the Church of Our Lord Jesus Christ of the Apostolic Faith, The Pentecostal Mission, and the Christian Congregation in the United States; the Plymouth Brethren; and the more conservative Dutch Reformed churches.

Those espousing the practice of headcovering have used Apostle Paul's appeal to universal principles in 1 Corinthians 11:2-16 to argue that since the passage mentions “every man” and “every woman,” as well as the universal order of creation, this passage must apply to all Christians in all ages and of all cultures. Also, some Christians wear head coverings because Sarah (Abraham's wife) Genesis 20:16 and Rebekah (Isaac's wife) Genesis 24:65 wore head coverings. They hold that the Bible is not merely referring to hair, long hair, or submission, but rather a literal cloth headcovering. They support this understanding from the original Greek, which uses two different words: one meaning covering, referring to the woman's head, i.e., her husband, and the other meaning veiling, referring to a literal cloth covering. 1 Corinthians 11:6 is also cited to refute the notion that the headcovering intended by Paul is merely long hair, ("For if the woman be not covered, let her also be shorn: but if it be a shame for a woman to be shorn or shaven, let her be covered.") because it would be akin to saying "If a woman has short hair, let her hair be cut short."

The word "hijab" or "ḥijāb" (Arabic: حجاب, (he-zjab)pronounced [ħiˈʒæːb] / [ħiˈɡæːb]) refers to both the head covering traditionally worn by Muslim women and modest Muslim styles of dress in general.

The Arabic word literally means curtain or cover (noun). Most Islamic legal systems define this type of modest dressing as covering everything except the face and hands in public. According to Islamic scholarship, hijab is given the wider meaning of modesty, privacy, and morality; the word for a headscarf or veil used in the Qur'an is khimār (خمار) and not hijab. Still another definition is metaphysical, where al-hijab refers to "the veil which separates man or the world from God."
at 10:31