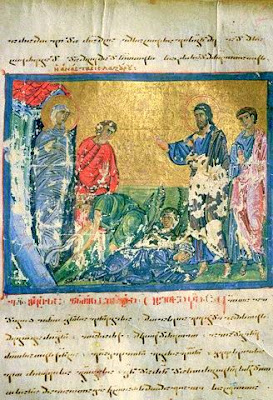 Christianity, first preached by the Apostles Simon and Andrew in the first century, became the state religion of Kartli (Iberia) in 319, making Georgia the second oldest Christian country after Armenia (301 AD). The final conversion of Georgia to Christianity in 319 is credited to St. Nino of Cappadocia. She was the only daughter of pious and noble parents, the Roman general Zabulon, a relative of the great martyr St. George, and Susanna, sister of the Patriarch of Jerusalem. The Georgian Orthodox Church, originally part of the Church of Antioch, gained its autocephaly in the 5th century during the reign of Vakhtang Gorgasali, and the Bible was also translated into Georgian in the 5th century. Notably, the oldest example of Georgian writing is an asomtavruli inscription in a church in Bethlehem from AD 430. The Georgians' new faith, which replaced Greek pagan and Zoroastrian beliefs, was to place them permanently on the front line of conflict between the Islamic and Christian worlds. As was true elsewhere, the Christian church in Georgia was crucial to the development of a written language, and most of the earliest written works were religious texts. After Georgia was annexed by the Russian Empire, the Russian Orthodox Church took over the Georgian church in 1811. The colorful frescoes and wall paintings typical of Georgian cathedrals were whitewashed by the Russian occupiers.

The Georgian church regained its autonomy only when Russian rule ended in 1918. Neither the Georgian Menshevik government nor the Bolshevik regime that followed considered revitalization of the Georgian church an important goal, however. Soviet rule brought severe purges of the Georgian church hierarchy and constant repression of Orthodox worship. As elsewhere in the Soviet Union, many churches were destroyed or converted into secular buildings. This history of repression encouraged the incorporation of religious identity into the strong nationalist movement in twentieth-century Georgia and the quest of Georgians for religious expression outside the official, governmentcontrolled church. In the late 1960s and early 1970s, opposition leaders, especially Zviad Gamsakhurdia, criticized corruption in the church hierarchy. When Ilia II became the patriarch (catholicos) of the Georgian Orthodox Church in the late 1970s, he brought order and a new morality to church affairs, and Georgian Orthodoxy experienced a revival. In 1988 Moscow permitted the patriarch to begin consecrating and reopening closed churches, and a large-scale restoration process began.

Svetitskhoveli Cathedral, known as the burial place of Christ's mantle, which was brought to Mtskheta after the crucifixion by Elias, a Georgian Jew from Iberia, is the first Georgian church. It is notable that Georgia falls under the patronage of the Virgin Mary—according to Saint Stefan, when the Apostles cast lots to determine in which country God desired each of them to preach the Gospel, the destiny of the mother of God was to preach in Iberia.

Jacques de Vitry and Sir John Maundeville stated that Georgians are called Georgian because they especially revere and venerate St. George, and that when they go on pilgrimage to the Lord's Sepulchre, they march into the Holy City with banners displayed, and without paying tribute to anyone.

The Georgian Orthodox Church (full title Georgian Apostolic Autocephalous Orthodox Church, or in the Georgian language : საქართველოს სამოციქულო მართლმადიდებელი ავტოკეფალური ეკლესია Sakartvelos Samocikulo Martlmadidebeli Avt'ok'epaluri Ek'lesia) is one of the world's most ancient Christian Churches, and tradition traces its origins to the mission of Apostle Andrew in the 1st century. It is an autocephalous (self-headed) part of the Eastern Orthodox Church. Georgian Orthodoxy has been a state religion in parts of Georgia since the 4th century, and is the majority religion in that country.

The Constitution of Georgia recognizes the special role of the Georgian Orthodox Church in the country's history but also stipulates the independence of the church from the state. The relations between the State and the Church are regulated by the Constitutional Agreement of 2002.