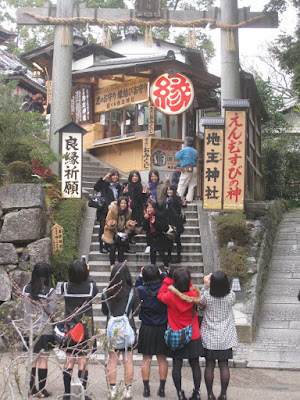 Giri (義理) is a Japanese value roughly corresponding to "duty", "obligation", or even "burden of obligation" in English. It is defined as "to serve one's superiors with a self-sacrificing devotion" by Namiko Abe

. Indeed, the conflict between giri and ninjō

, or human feeling, is said to be the primary topic of Japanese drama since historical periods. Today, social critics decry the diminishing influence of giri on shinjinrui

, the new generations of Japan, who pursue an individualistic path in life that seems quite disparate from traditional Japanese culture

, according to traditionalists.
Giri may be seen in many different aspects of modern Japanese behavior:
Some social historians believe the pervasiveness of this concept in Japanese culture is a reflection of the static feudal order that defined Japanese society for centuries. "Giri books," or village registers that included all the unpaid obligations of one family or individual to another were a cultural phenomenon that could only exist in a static agricultural culture, as opposed to a migrant or hunter/gatherer tradition. Other historians see more influence from samurai

traditions, which included a placid acceptance of death and willingness to commit suicidal actions forbidden in the Western Christian tradition

, the concept of giri is a major factor in the story. The character Tanaka Ken (Takakura Ken) owes Harry Kilmer (Robert Mitchum) a "debt that can never be repaid," for saving the life of his sister and her young daughter during the post-war occupation of Japan. In the film, he describes giri to a Westerner as "the burden hardest to bear." In addition, in the Transformers animated series

episode, "The Burden Hardest to Bear", the Autobot Kup

. Much of the episode is set in Japan, and deals with Rodimus Prime's reluctance to be a leader, only to eventually come to grips with his responsibility.

J-List is a peaceful island of Japanese pop culture for you
at 02:26