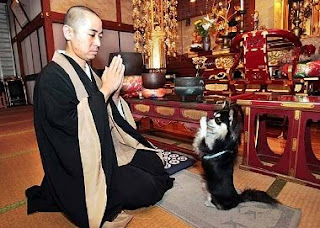 It’s been said that all dogs go to heaven. Man’s best friend gives unconditional love and asks nothing in return; accepting the occasional pat on the head, an infrequently tossed treat, and timely access to the back yard at potty time as his reward.

Even the mean ones aren’t evil, they’re merely responding to being mistreated so they make it to heaven too.

In Japan a Buddhist priest, Joei Yoshikuni has a pet black and white, one and a half year-old Chihuahua named Conan. Conan follows his master around and sits with him while he’s praying at the altar of Shuri Kannondo temple in Naha, the capitol city of the southern Okinawa prefecture.

With no urging, Conan has learned how to imitate his master saying his prayers; sitting on his haunches with his paws together in front of his face as if he’s praying too. Who knows for sure whether Conan is actually saying doggie prayers or just trying to please his master?

It’s been said that politicians are as crooked as a dog’s hind leg which is why Joei Yoshikuni can’t teach him to meditate. Conan would never be able to cross his legs in the Lotus Position.

Of course Conan doesn’t need to be able to meditate to get to heaven, he already has a free pass; but it’s nice to see he’s hedging his bet with a little prayer time.

The world would be in better shape if more humans were to lead a dog’s life and imitate Conan.
at 08:55