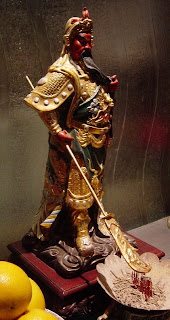 Guan Yu has been deified as early as the Sui Dynasty and is still popularly worshipped today among the Chinese people variedly as an indigenous Chinese deity, a bodhisattva in Buddhism and a guardian deity in Taoism. He is also held in high esteem in Confucianism. These are not necessarily contradictory or even distinguished in these Chinese religious systems, which merge multiple ancient philosophies and religions.

In the Western world, Guan Yu is sometimes called the Taoist God of War, probably because he is one of the most well-known military generals in Chinese history. This is misconceived as, unlike Mars or Tyr, Guan Yu as a god does not necessarily bless those who go to battle but rather people who observe the code of brotherhood and righteousness.

Guan Yu is revered as Saintly Emperor Guan (simplified Chinese: 关圣帝君; traditional Chinese: 關聖帝君; pinyin: Gūanshèngdìjūn) and a leading subduer of demons in Taoism. Taoist worship of Guan Yu began during the Song Dynasty. Legend has it that during the second decade of the 12th century, the saltwater lake in the present day Xiezhou County (解州鎮) gradually ceased to yield salt. Emperor Huizong then summoned Celestial Master Zhang Jixian (張繼先), thirtieth descendant of Celestial Master Zhang Daoling, to investigate the cause. The emperor was told that the disruption was the work of Chi You, a deity of war. The Master then recruited the help of Guan Yu, who did battle with Chi You over the lake and triumphed, whereupon the lake resumed salt production. Emperor Huizong then bestowed upon Guan Yu the title of Immortal of Chongning (崇寧真君), formally introducing the latter as a deity into Taoism.

In early Ming Dynasty, the forty-second Celestial Master Zhang Zhengchang (張正常) recorded the incident in his book Lineage of the Han Celestial Masters (漢天師世家), the first Taoist classic to affirm the legend. Today Taoism practices are predominant in Guan Yu worship. Many temples dedicated to Guan Yu, including the Emperor Guan Temple in Xiezhou County, show heavy Taoist influence. Every year, on the twenty fourth day of the sixth month on the lunar calendar (legendary birthday of Guan Yu, Emperor Guan was actually born on the twenty second day of the sixth month of the year 160), a street parade in the honor of Emperor Guan would also be held.

In Chinese Buddhism, Guan Yu is revered by most practicing Buddhists as Sangharama Bodhisattva (simplified Chinese: 伽蓝菩萨; traditional Chinese: 伽藍菩薩,; pinyin: Qíelán Púsà) a protector of the Buddhist dharma. Sangharama in Sanskrit means 'community garden' (sangha, community + arama, garden) and thus 'monastery'. The sangharama refer to a group of devas and spirits who guard Buddhist monasteries, the dharma, and the faith itself. Over time, Guan Yu was seen as a representative sangharama guardian of the temple and the garden in which it stands. His statue is usually located on the far left of the main shrine, opposite his counterpart, Skanda.

According to Buddhist legends, in 592, Guan Yu manifested himself one night before Ch'an Master Zhiyi, the founder of the Tientai school of Buddhism, along with a retinue of spiritual beings. Zhiyi was then in deep meditation on Yuquan Hill (玉泉山) when he was distracted by Guan Yu's presence. Guan Yu then requested the master to teach him about the dharma. After receiving Buddhist teachings from the master, Guan Yu took refuge in the triple gems and also requested the Five Precepts. Henceforth, it is said that Guan Yu made a vow to become a guardian of temples and the Dharma. Legends also claim that Guan Yu assisted Zhiyi in the construction of the Yuquan Temple (玉泉寺), which still stands today.

In the historical novel Romance of the Three Kingdoms, Luo Guanzhong wrote that Guan Yu manifested himself to a monk named Pujing (普淨) on Yuquan Hill on the night of his death, with his spirit shouting "Return my head!" From Pujing, Guan Yu sought the Buddhist teachings and entered the faith after being told by Pujing "Where will Yan Liang, Wen Chou, and the guardians of the five passes whom you have slain should seek their heads?" While this being a modification of the true account, Pujing did exist in history. The location at which Pujing built a grass hut for himself was where the Yuquan Temple was later built on.
at 00:01