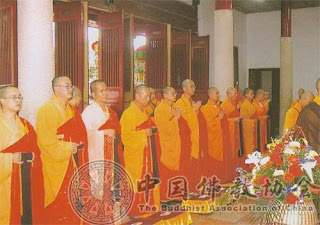 Master Xue Cheng, the Buddhist Association of China vice secretary-general, said at a forum here that Buddhist commandments advocated "kind" and "merciful" and the returning favor offered by the country, society and people.

"The March 14 riot incurred great losses to people and property and seriously damaged the image of Buddhism. The act, aiming to create disturbance and instability and realize the 'Tibet independence', runs counter to the Buddhist commandments and will be reprimanded by Buddhist followers," Xue said.

Master Hai Tao from Taiwan said a real Buddhist follower should love the country, the society and the world; they must dedicate themselves to the protection of the society.

"Damage to peace should not be incurred by Buddhists for whatever reason, especially the act of using violence to spoil peace in order to achieve a special political plot," he said.

"The development of the Chinese mainland was rapid and prosperous. We strongly denounce the disruption of social stability using the Olympics as a pretense."

Master Hong Yuan, also from Taiwan, believed the power of Buddha was a bridge linking Taiwan and the mainland and all flesh. On the Lhasa riot, he said the riot mastermind by the Dalai Lama "breached communication and killed the innocent." He called for all Buddhists to be merciful.

"In order to promote an orthodoxy Buddhism, we must not allow a few monks to engage in such activities as assault, vandalism, looting and arson," added Master Xian Xin from Hong Kong. "We should remind them to return to the teaching of Buddhism and assume due responsibility for the stability and the people in Tibet."

The accomplished monks and masters sent their hearty blessings for the August Beijing Olympic Games, saying they were confident of its success.
at 08:28