Confucianism, Taoism, and Buddhism are one 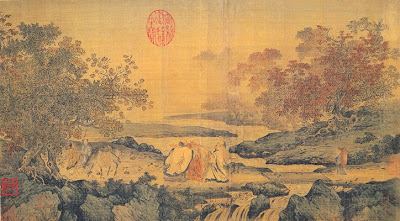 Religion in China has been characterized by pluralism since the beginning of Chinese history. Temples of many different religions dot China's landscape, particularly those of Taoism, Buddhism, and Chinese folk religion. Mahayana Buddhism remains the largest organized religion in China since its introduction in the 1st century.

The original and state religion throughout Chinese history generally involved Heaven worship based on serving an omnipotent, incorporeal (without body), personal, judicious, monotheistic supreme being called Shangdi ("Lord on High") or Tian ("Heaven"). Buddhism was introduced to China around the first century AD and rose to predominance during the Tang Dynasty (618-907 AD), which initially tolerated its coexistence. Tensions between Buddhism and the Chinese Tang state led to the Great Anti-Buddhist Persecution in 845 AD, from which Buddhism in China never fully recovered.

Some surveys suggest that the cultural adherents or even outright religious adherents of Buddhism could number as high as 80% of the population, or about over 1 billion. The second largest religion is Taoism (a recent survey puts “Taoist or worshipper of legendary figures” at 100 million, but some estimates are as high as 400 million or about 30% of the total population).

The number of adherents to these religions can be overlaid in percentage due to the fact that most Chinese consider themselves both Buddhist and Taoist.

The minority religions are Christianity (between 40 million, 3%, and 54 million, 4%), Islam (20 million, 1.5%), Hinduism, Dongbaism, Bon and a number of new religions and sects (particularly Xiantianism and Falun Gong).

It is a matter of current debate whether several important belief systems in China constitute "religions." As Daniel L. Overmeyer writes, in recent years there has been a "new appreciation...of the religious dimensions of Confucianism, both in its ritual activities and in the inward search for an ultimate source of moral order." Many Chinese belief systems have concepts of a sacred and sometimes spiritual natural world yet do not always invoke a concept of personal god (with the exception of Heaven worship).

Chinese religions are often classified as religions, philosophies, spiritualities or ways of life. Taoism and Buddhism are often considered pantheistic and nontheistic, while Chinese folk religion is widely polytheistic.

Independently of adherence to organized religions, most Chinese ground their spirituality in Chinese folk religion, Confucianism and ancestor veneration. These are not organized religions but rather practices or thought systems denoting membership in ethnic Chinese culture and civilization.

The Chinese religions are family-oriented and, unlike Western religions, do not demand the exclusive adherence of members. Chinese people may visit Buddhist temples while living according to Taoist principles and participating in local ancestor veneration rituals. To cite Rodney L. Taylor, "There is little doubt that Buddhism and Neo-Confucianism are deeply influenced by each other and that at the level of practice, methods from various sources are tried, borrowed, and interrelated." In other words, the questions of who should be called religious in China, and what religion or religions they should be called are up to debate.
at 21:40