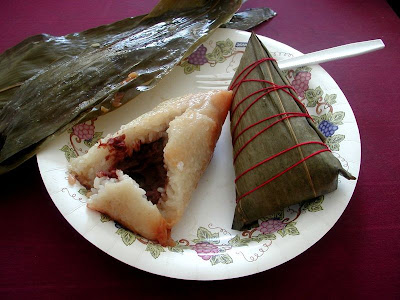 This festival actually has nothing to do with Buddhism, Taoism, Confucianism, or Christianity, but it is a very important festival in China, and I still wanted to share this weekend's significance with my readers.

The Duanwu Festival is a Chinese traditional and statutory holiday. It is a public holiday in mainland China and Taiwan, where it is known as Duānwǔ Jié. It is also a public holiday in Hong Kong and Macau, where it is known as Duen Ng Festival. Its alternative name in English is "Dragon Boat Festival", after one of the traditional activities for the holiday.

The Duanwu Festival is also been celebrated on the same day in other East Asian nations. In Korea it is called the Dano or Suritnal, in Vietnam it is called Tết Đoan Ngọ, and in Japan it is called Kodomo No Hi or Children's Day.

The Duanwu Festival occurs on the fifth day of the fifth month of the Chinese (lunar astrological) calendar, giving rise to the alternative name of Double Fifth. In 2008, this falls on 8 June. The focus of the celebrations include eating zongzi, which are large rice wraps, drink realgar wine, and race dragon boats.

The Duanwu Festival originated in ancient China. One traditional view holds that the festival memorializes the high official Qu Yuan (c. 340 BC-278 BC) of the ancient state of Chu in the Warring States Period. Wut Yuen committed suicide by drowning himself in a river because he found out that Chu had lost a vital battle. The local people, knowing him to be a good man, decided to throw food into the river to feed the fish so that they would not eat Qu Yuan's body. They also sat on long, narrow paddle boats called dragon boats, and tried to scare the fish away by the thundering sound of drums aboard the boat and carved dragon head on the boat's prow. Another popular legend holds that after Qu Yuan committed suicide, because the people loved him so much, they raced out to recover his body, and the races signify the boats skimming across the water to find him. However, research has also revealed that the festival is also a celebration that is characteristic of ancient Chinese agrarian society: the celebration of the harvest of winter wheat, because similar celebrations had long existed in many other parts of China where Qu Yuan was not known. As interactions between Chinese residing in different regions increased, these similar festivals were eventually merged.

In the early years of the Republic of China, Duan Wu was also celebrated as "Poets' Day," due to Qu Yuen's status as China's first poet of personal renown.

Today, people eat bamboo-wrapped steamed rice dumplings called zongzi (the food originally intended to feed the fish) and race dragon boats in memory of Qu Yuan's death. In some rural towns, candles are lit in paper boats on the evening of the festival.
at 10:06