The Shaolin Monastery: History, Religion, and the Chinese Martial Arts 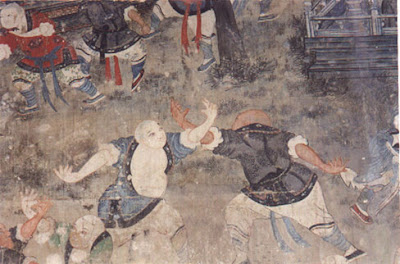 The Shaolin Monastery: History, Religion, and the Chinese Martial Arts by Meir Shahar.

“Written in clear and lucid style and ambitious both in scope and methodology, this book offers a fascinating window into Chinese culture, religion, and history. Ranging from historical and ethnographic documents to a wide variety of literary sources, it weaves them all into a compelling narrative. In this fashion, Shahar is uniquely able to bring together social, historical, and mythological elements, providing a demythologized account of martial Chinese traditions such as Shaolin Boxing. This is sinology at its best.”—Bernard Faure, Columbia University

“The book clearly belongs in a new group of books challenging conventional understandings of Buddhism and violence. Meir Shahar documents with meticulous accuracy and mellifluous prose the fighting monks of Shaolin monastery in China, who appear first in the Tang dynasty (618–907) and continue to the present. Scholars of Buddhism and Chinese history will learn much from the author's scrupulous analysis of the historical record—particularly the texts on stone steles at the monastery—that documents the monastery's traditions of fighting. Anyone interested in martial arts or Bruce Lee films will find it fascinating to learn about the actual history of the monastery’s fighting techniques. I found the book a powerful and compelling read.” —Valerie Hansen, Yale University

“Meir Shahar's book will assure that the martial arts of Shaolin take a prominent place in the history of Chinese Buddhism. Shahar has mastered a prodigious amount of secondary scholarship, pored over a wealth of primary documents, and brought a critical rigor to the study of these materials that is unprecedented in any language. Throughout, his analysis is cogent and clear. The result is a delightful tour of one of the most enigmatic and compelling stories of Chinese religion: the emergence and development of martial arts at Shaolin Si. Entertaining as the book is, it delivers as well a meditation on the sources of Chinese religion, and how fiction and scripture, myth and history combine to produce novel traditions. The Shaolin Monastery will appeal not only to scholars of Chinese religion, but to those interested in military history, self-cultivation, martial arts, and popular culture.”—John Kieschnick, University of Bristol

The Shaolin Monastery charts, for the first time in any language, the history of the Shaolin Temple and the evolution of its world-renowned martial arts. In this meticulously researched and eminently readable study, Meir Shahar considers the economic, political, and religious factors that led Shaolin monks to disregard the Buddhist prohibition against violence and instead create fighting techniques that by the twenty-first century have spread throughout the world. He examines the monks’ relations with successive Chinese regimes, beginning with the assistance they lent to the seventh-century Emperor Li Shimin and culminating more than a millennium later with their complex relations with Qing rulers, who suspected them of rebellion. He reveals the intimate connection between monastic violence and the veneration of the violent divinities of Buddhism and analyzes the Shaolin association of martial discipline and the search for spiritual enlightenment.

Shahar’s exploration of the evolution of Shaolin fighting techniques serves as a prism through which to consider martial-art history in general. He correlates the emergence of the famous bare-handed techniques of Taiji Quan, Xingyi Quan, and Shaolin Quan in the sixteenth and seventeenth centuries to the social, political, and religious trends of that age. He then goes on to argue that these techniques were created not only for fighting, but also for religious and therapeutic purposes. Thus his work fills an important gap in the understanding of Chinese religion and medicine as well as the martial arts.

The Shaolin Monastery is the most exhaustive study to date on the topic and the most systematic introduction to the history and the religious context of the Chinese martial arts tradition. It will engage those interested in Chinese religion and history and martial arts, illuminating for specialists, martial artists, and general readers alike the history and nature of a martial tradition that continues to grow in popularity in its native land and abroad. Meir Shahar is associate professor in the Department of East Asian Studies, Tel Aviv University.
at 13:04

I'd like to add this book to my list NF Chinese Historicals. Yuan-tsung Chen wrote a book called,"Return to Middle Kingdom" that got me intrigued with this genre. Ms. Chen is a master at unraveling the devious thread of Chinese history through the early half of the 20th century.