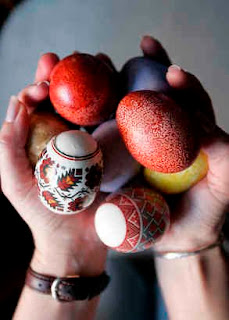 Marina Zavialova's favorite Easter tradition will take place in the early hours of Sunday morning when Father Athanasy of the Russian Orthodox Church in Fairmount blesses her basket of meats and cheeses.

in this Easter basket.

Since the Great Schism of 1054 split the Eastern Orthodox and Roman Catholic Churches, the two have charted their holy days by different calendars, so their celebrations do not often take place on the same days.

But this year, the Eastern Orthodox Julian and Roman Catholic Gregorian calendars do coincide.

Like Roman Catholics, Eastern Orthodox consider Easter - Pascha - the most significant holy day of the year. But their food traditions are distinctive. So we asked Zavialova and three friends from the Russian Orthodox Church of Our Lady, the Joy of All Who Sorrow, at 20th and Brandywine Streets, to tell us about the foods that distinguish their celebration.

And, because geography so greatly influences cuisine, we also dished about dishes with Loula Bouikidis, a member of St. George Greek Orthodox Cathedral at Eighth and Locust Streets.

Zavialova, who came here just 18 months ago, and Bouikidis, who arrived 42 years ago as a 16-year-old bride, represent different waves of immigration. But newcomers have long enriched the city's culinary landscape.

In the early 1900s Philadelphia was the destination for scores of Eastern Orthodox immigrants from Ukraine, Poland, Serbia, Albania, Romania, Slovakia, and more. Most settled in Northern Liberties, where they built ornate domed churches and baked legendary Easter breads.

This week, crowds will converge on grocery stores and bakeries in Port Richmond, the Northeast, and South Philadelphia in search of culinary touchstones. And the variety of what they seek speaks to the many ways religion, ethnicity, and even geopolitics influence what we eat.

To Bouikidis, Easter bread is tsoureki

, a round brioche-like loaf twisted in the shape of a crown and decorated with a crimson egg

. Stalwarts on the Philadelphia restaurant scene, the Bouikidis family owns Pine Street Pizza, Effie's Greek Restaurant, and now Paul's, a "new American" BYO, all on the 1100 block of Pine Street. So as a pro, Loula Bouikidis' tsoureki will be on sale at St. George Cathedral now through April 15 for $5 and $10.

For Russian Orthodox families, Easter bread is kulich, a sweet bread baked using aluminum cans as molds and frosted with meringue to resemble a giant cupcake.

As a main dish on Easter, Greek families like Bouikidis' will serve roast leg of lamb

But Zavialova and her friends, in their 30s and 40s, came here accustomed to food scarcity, so they stretch their meat, using it as a filling for pierogi

and savory pies, stuffing it in cabbage, and blending it into kielbasa

Even within the Greek community, there is culinary variety based on what part of Greece you are from, says Father Nektarios Cottros of St. George Cathedral.

, which is made with chicken, rice, and lemon, or mageritsa, which is the heart, lungs, liver, and innards of the lamb, cooked with an egg-lemon base. Other people prefer what we call fricassee

, which is and egg-and-lemon-based soup with romaine lettuce wilted in along with pieces of lamb."

Baskets of food are blessed at many but not all Eastern Orthodox churches. At Zavialova's church the traditional Paschal Vigil starts at 12:01 a.m. Sunday, and it is 4 or 5 a.m. by the time the baskets are blessed and churchgoers sit down to a shared meal.

In Russia, extended families would be together, says Nadia Soloukhina, who emigrated here from St. Petersburg about a decade ago. But now many families are far apart, so the church is the center of social and religious life.

"Because the church is here, it is our family," says Yuliya Shatunova, who came here from Omsk in southwestern Siberia 11 years ago and works as an office manager.

"People bring their baskets, we open a few bottles of wine, and we share," says Shatunova, who is planning to roast a turkey for the occasion.

Church teachings add another layer to the edible mandate. During the 40-day Great Lent, she says, Eastern Orthodox do not eat meat or dairy. So these are the ingredients with which they mark the Resurrection.

, a delicious dessert cheese made in the shape of a pyramid. The mold embeds the phrase "Christ Is Risen" in the sides of the cheese, which is a mix of farmer's cheese

with grated lemon rind, raisins, orange peel, almonds, or candied fruits. It tastes like cheesecake without the crust and Athanasy compares it favorably to hrutka, which was made long ago in the Carpathians.

"They would put the cheese in a kerchief" in the days before cheesecloth, he says, "and hang it from the trees until it molded into the pyramid shape."

Both paskha and kulich take days to prepare, says Elena Lukashenko, another of the Russian Orthodox Church women. So people tend to buy them at one of the shops in Northeast Philadelphia that serve the Eastern European community.

"Many years ago ladies didn't work," says Lukashenko, an accountant in her 40s. "They spent weeks making paskha and kulich. Today if you do make it yourself you take shortcuts with a mixer or a bread machine

And then there are Easter eggs

. Instead of Easter egg hunts, Eastern Orthodox people play an egg-cracking game in which two people face off, each with one hard-boiled egg, and try to crack the other's egg shell.

Ukrainians are famous for their pysanky

, eggs hand-painted in intricate patterns. But most Eastern Orthodox people make solid red eggs to symbolize the blood of Christ.

Instead of buying dyes, Zavialova and her friends made a batch the natural way, getting purple from shredded red cabbage, red from the skins of red onion (beets also work), rich brown from brewed coffee, and a sunny yellow from a mix of dried turmeric and curry.

(At home, use 1/4 teaspoon of vinegar for each dozen eggs. Boil the onion skins or cabbage in a saucepan, add eggs and vinegar, and simmer for 20 minutes, leaving some eggs in longer for a deeper color.)

Zavialova says her 5-year-old, Regina, sees children in her kindergarten class with chocolate eggs and bunnies

"She asks for them and, of course, I will let her have the chocolate. But I talk to her more about having kulich and dyed eggs."


1. Shred cucumber with a peeler, or in a food processor. Strain excess water for several hours or overnight.

2. Mix the cucumber with the yogurt. Add salt and pepper to taste and 1 to 2 cloves of minced garlic. Add olive oil and either vinegar or lemon juice.

3. Refrigerate before serving. Dip can be stored in the refrigerator for up to a week.


1. Put lamb neck in a stockpot and cover with water. Using one half of a lemon, squeeze the juice over the meat and then drop the squeezed lemon half into the water.

2. Bring the water to a boil. Reduce heat to medium and cook for 11/2 to two hours, until the meat is tender but not reduced to pieces. Remove the neck gently and let it cool. Then remove the meat from the bone and discard the bone. Strain the cooking water, saving two cups.

3. In a fresh stockpot, heat the olive oil, add scallions and dill, and saute. Add the cooked meat, two cups of the strained cooking water, and 6 cups of fresh water.

4. Add salt and pepper to taste. Bring to a boil. Add one cup of rice and cook covered for 20 minutes until rice is cooked. Remove from heat.

5. In a separate bowl, make a lemon sauce: Whisk two eggs well, and add the juice of the remaining lemons. Scoop 1 to 2 cups of warm soup and add slowly to the egg and lemon mixture to temper the eggs. Then add the lemon mixture to the soup, stirring constantly. Soup may be refrigerated and reheated.

2. Wash the meat and pat dry. Combine the salt, pepper, oregano, and garlic powder and rub that mixture on the lamb.

3. Put the lamb on a rack in a roasting pan lined with enough parchment paper to fold over the side of the pan, but do not cover. Pour the lemon juice over the lamb.


1. Combine the butter with both sugars and beat with a hand mixer about five minutes until blended. Add the eggs and beat two minutes. Add 1/4 cup milk and stir.

2. In a separate bowl, combine the lemon juice and baking soda. The mixture will bubble slightly. Pour this mixture into the butter, egg, and sugar mixture. Add vanilla.

3. Combine the baking powder with 4 cups of flour. Add to the batter and stir. If the dough is very sticky at this point, add some additional flour, a little at a time.

4. Let the dough rest for at least one hour or overnight in the refrigerator.

5. When you are ready to make the cookies, preheat oven to 375 degrees. Dough may be used straight from the refrigerator or after 15 minutes.

6. Use an ice cream scoop to make balls of dough. Then shape each ball with your hands, rolling to form a twisted six-inch oblong or an S shape.

7. Put the cookies on a sheet pan lined with parchment and brush with an egg wash made of 2 egg yolks, a teaspoon of sugar, and a tablespoon of milk. Sprinkle with sesame seeds if desired.