San Jiao He Yi: Three Teachings Harmonious As One 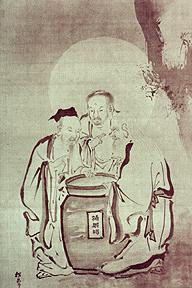 In East Asia, the three teachings, known as the San Jiao (三教) in Chinese, are considered to be Confucianism, Taoism and Buddhism. The use of the phrase the "three teachings" as an aggregate title of these three belief systems first occurred during the Wei Dynasty and Jin dynasty. Many Buddhists consider Confucist and Taoist teachings as part of their religion. The three teachings may also be interpreted as a non-religous philosophy so a Chinese of a monotheistic faith such as Judaism, Islam or Christianity may accept the philosophy of the three teachings.

The phrase the "three teachings harmonious as one (三教合一)" has both an academic meaning and a common one. Academically, this was the name of the sect founded during the Ming Dynasty by Lin Chao-en that combined Buddhist, Confucian and Taoist beliefs. The common understanding of "three teachings harmonious as one," however, has little to do with this ancient sect. Today, many Chinese take the phrase to simply reflect the long history, mutual influence, and (at times) complementary teachings of the three belief systems.

In Henan Province's Shaolin Temple, a stone tablet represents the concept of the "Three Teachings Harmonious as One." The tablet is an optical illusion. Looked at in one way, it appears to be a single, fat monk holding a scroll; looked at in another way, it is clearly an illustration of three monks bent over the same scroll. The man on the left is Laozi, the founder of Taoism. The man in the middle is Sakyamuni, the founder of Buddhism, and the man on the right is Kongzi (Confucius), the founder of Confucianism. If you look closely, the three men have only one nose—this represents the ultimate harmony of their respective faiths.

The painting was popularized in the Western world by the American Taoist writer Benjamin Hoff's book, The Tao of Pooh. As mentioned in the book, the scroll painting was a popular piece of art in ancient times. However nowadays it is rarely painted in China anymore.

"From the Taoist point of view, sourness and bitterness come from the interfering and unappreciative mind. Life itself, when understood and utilized for what it is, is sweet. That is the message of 'The Vinegar Tasters'".
—Benjamin Hoff, The Tao of Pooh