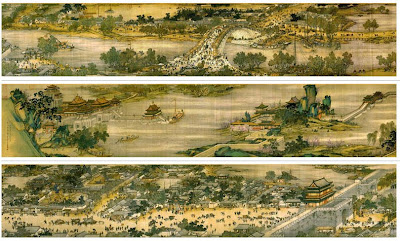 The traditional East Asian calendars divide a year into 24 solar terms (節氣). Qīngmíng (pīnyīn) or Seimei (rōmaji) (Chinese and Japanese: 清明; Korean: 청명; Vietnamese: Thanh minh; literally: "clear and bright") is the 5th solar term. It begins when the Sun reaches the celestial longitude of 15° and ends when it reaches the longitude of 30°. It more often refers in particular to the day when the Sun is exactly at the celestial longitude of 15°. In the Gregorian calendar, it usually begins around April 4 (April 5 East Asia time) and ends around April 20.

The Cold Food Festival is a traditional Chinese holiday celebrated for three consecutive days starting the day before the Qingming Festival in the Chinese Calendar, which falls on the 105th day after dongzhi (April 5 by the Gregorian calendar, except in leap years). It is celebrated in China as well as the nearby nations of Korea and Vietnam. At this time of year, the sky becomes clearer and buds sprout in the field. Farmers sow various seeds and supply water to their rice paddies.

Qing Ming Holiday is known by a number names in the English language:
Legend has it that Chong'er (重耳), a prince of Jin, endured many hardships while he fled around the warring states. Once, in order to help the prince who was tormented by hunger, Jiè Zhītuī(介之推 or Jiè Zǐtuī, 介子推) cut off the flesh from his thigh and offered it to the prince for sustenance.

Later, when Chong'er became Duke Wen of Jin (晉文公), he ordered a search for Jie Zhitui who had gone into hiding in the remote mountains with his mother. Jie Zhitui had no political ambitions and felt ashamed to work with his hypocritical fellows, hence refused invitation of the Duke. Chong'er ordered the mountains to be burned down in order to force Zhitui out of hiding. Unfortunately Zhitui did not give in and the fire ended up killing Zhitui and his mother.

Filled with remorse, Chong'er ordered that each year during these three days the setting of fire is forbidden – all food was to be consumed cold. Therefore the Festival is thus named. In Jiexiu City of the Shanxi Province, where Jie zhitui died, locals still remember this tradition clearly. But even for them the tradition of eating cold food is no longer actually practiced.

The Cold Food Festival started from the ancient tradition of setting fire by rubbing wood pieces together and the tradition of lighting new fires. Due to the change of seasons and the change in the type of wood available, the ancient practice was to change the type of fire-starter-wood used from season to season. Fire is lighted anew upon the start of each season. Before the new fire is officially started no one is allowed to light a fire. This was an important event during that time. The traditionally practiced activities during the Cold Food Festival includes the visitation of ancestral tombs, cock-fighting, playing on swings, beating out blankets (to freshen them), tug-of-war, etc. The practice of visitation of ancestral tombs is especially ancient.

In Vietnam, where it is called Tết Hàn Thực, the Cold Food Festival is celebrated by Vietnamese people in the northern part of the country on the third day of the third lunar month, but only marginally. People cook glutinous rice balls called bánh trôi on that day but the holiday's origins are largely forgotten, and the fire taboo is also largely ignored.

In Korea, it is called Hansik, literally meaning "cold food," and is a traditional Korean holiday. In the modern version of Hansik, people welcome the warm weather thawing the frozen lands. On this day, rites to worship ancestors are observed early in the morning, and the family visits their ancestors' tombs to tidy up.

Falling on the 105th day after the winter solstice (April 5 by the Gregorian calendar, except in leap years). At this time of year, the sky becomes clearer and buds sprout in the field. Farmers sow various seeds and supply water to their rice paddies. The custom of eating cold food on this day is believed to originate from a Chinese legend, but recently this custom has disappeared.

Since this day coincides with Arbor Day, public cemeteries are crowded with visitors planting trees around the tombs of their ancestors.
at 01:30