How to address clergy 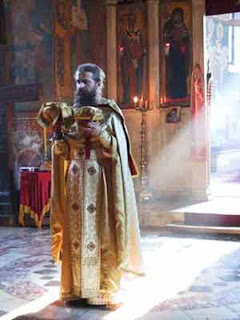 When we address Deacons or Presbyters (Priests), we should use the honorific, "Father." Bishops we should address as "Your Grace." Though all Bishops (including Patriarchs) are equal in the Orthodox Church, they do have different administrative duties and honors that accrue to their rank in this sense. Thus, "Your Eminence" is the proper honorific for Bishops with suffragans or assistant Bishops, Metropolitans, and most Archbishops (among the exceptions to this rule is the Archbishop of Athens, who is addressed as "Your Beatitude"). "Your Beatitude" is the proper honorific for Patriarchs. When we approach an Orthodox Presbyter or Bishop, we (if a monastic: make a bow by reaching down and touching the floor with our right hand), place our right hand over the left (palms upward), and say: "Father, Bless," (or "Bless, Your Grace," or "Bless, Your Eminence," etc.). The Priest or Bishop then answers, "May the Lord bless you," blesses us with the Sign of the Cross, and places his right hand in our hands. We kiss then his hand. It is, however, permissible to kiss the hand of a Deacon, just as we do that of an Abbot (even if not a Priest) or Abbess of a monastery or a revered monastic, out of respect or as a sign of dedication.


We should understand that when the Priest or Bishop blesses us, he forms his fingers to represent the Christogram "ICXC" a traditional abbreviation of the Greek words for "Jesus Christ" (i.e., the first and last letters of each of the words "IHCOYC XRICTOC"). Thus, the Priest's blessing is in the Name of Christ, as he emphasizes in his response to the believer's request for a blessing. Other responses to this request are used by many clergy, but the antiquity and symbolism of the tradition which we have presented are compelling arguments for its use. We should also note that the reason that a lay person kisses the hand of a Priest or Bishop is to show respect to his Apostolic office. More importantly, however, since both (as well as the deacon) hold the Holy Mysteries in their hands during the Divine Liturgy, we show respect to the Holy Eucharist when we kiss their hands. In fact, Saint John Chrysostomos once said that if one were to meet an Orthodox Priest walking along with an Angel, that he should greet the Priest first and kiss his hand, since that hand has touched the Body and Blood of our Lord. While a Deacon in the Orthodox Church holds the first level of the Priesthood (Deacon, Presbyter, Bishop), his service does not entail blessing the Mysteries. When we take leave of a Priest or Bishop, we should again ask for a blessing, just as we did when we first greeted him.


In the case of married clergy, the wife of a Priest or Deacon is also informally addressed with a title. Since the Mystery of Marriage binds a Priest and his wife together as "one flesh," [Genesis 2:24; St. Matthew 19:6; St. Mark 10:8.] the wife shares in a sense her husband's Priesthood. This does not, of course, mean that she has the very Grace of the Priesthood or its office, but the dignity of her husband's service certainly accrues to her. [A Guide to Orthodox Life] The various titles used by the national Churches are listed below. The Greek titles, since they have English correspondents, are perhaps the easiest to use in the West:
The wife of a Deacon is called "Diakonissa [Thee-a-kó-nees-sa]" in Greek. The Slavic Churches commonly use the same title for the wife of a Deacon as they do for the wife of a Priest. In any case, the wife of a Priest should normally be addressed with both her title and her name in informal situations (e.g., "Presbytera Mary," "Diakonissa Sophia," etc.).

Whenever you speak to Orthodox clergy of Priestly rank on the telephone, you should always begin your conversation by asking for a blessing: "Father, bless." When speaking with a Bishop, you should say "Bless, Despota [Thés-po-ta]" (or "Vladika [Vlá-dee-ka], Bless" in Slavonic, "Master, Bless" in English). It is also appropriate to say, "Bless, Your Grace" (or "Your Eminence," etc.). You should end your conversation by asking for a blessing again.

When we write to a clergyman (and, by custom, monastics), we should open our letter with the greeting, " Father, Bless." At the end of the letter, it is customary to close with the following line: "Kissing your right hand...." It is not appropriate to invoke a blessing on a clergyman, as many do: "May God bless you." Not only does this show a certain spiritual arrogance before the image of the cleric, but laymen do not have the Grace of the Priesthood and the prerogative to bless in their stead. Even a Priest properly introduces his letters with the words, "The blessing of the Lord" or "May God bless you," rather than offering his own blessing. Though he can do the latter, humility prevails in his behavior, too. Needless to say, when a clergyman writes to his ecclesiastical superior, he should ask for a blessing and not bestow one.

Deacons in the Orthodox Church are addressed in writing as "The Reverend Deacon," if they are married Deacons. If they are Deacons who are also monks, they are addressed as "The Reverend Hierodeacon." If a Deacon holds the honor of Archdeacon or Protodeacon, he is addressed as "The Reverend Archdeacon" or "The Reverend Protodeacon." Deacons hold a rank in the Priesthood and are, therefore, not laymen. This is an important point to remember, since so many Orthodox here in America have come to think of the Deacon as a kind of "quasi—Priest." This is the result of Latin influence and poor teaching. As members of the Priesthood, Deacons must be addressed, as we noted above, as "Father".


Orthodox Priests are addressed in writing as "The Reverend Presbyter (or Priest)," if they are married Priests. If they are Hieromonks (monks who are also Priests), they are addressed as "The Reverend Hieromonk." Priests with special honors are addressed in this manner: an Archimandrite (the highest monastic rank below that of Bishop), "The Very Reverend Archimandrite" (or, in the Slavic jurisdictions, "The Right Reverend Archimandrite"); and Protopresbyters, "The Very Reverend Protopresbyter." In personal, verbal address, as we noted above, all Priests are called "Father," usually followed by their first names (e.g., "Father John").


Bishops in the Orthodox Church are addressed in writing as "The Right Reverend Bishop," followed by their first name (e.g., "The Right Reverend Bishop John"). Archbishops, Metropolitans, and Patriarchs are addressed as "The Most Reverend Archbishop" ("Metropolitan," or "Patriarch"). Because they are also monastics, all ranks of Archpastors (Bishops, Archbishops, Metropolitans, or Patriarchs) are addressed by their first names or first names and sees (e.g., "Bishop John of San Francisco"). It is not correct to use the family name of a Bishop—or any monastic for that matter. Though many monastics and Bishops use their family names, even in Orthodox countries like Russia and Greece, this is absolutely improper and a violation of an ancient Church custom.


All male monastics in the Orthodox Church are called "Father," whether they hold the Priesthood or not, and are formally addressed in writing as "Monk (name)," if they do not have a Priestly rank. If they are of Priestly rank, they are formally addressed in writing as "Hieromonk" or "Hierodeacon" (see above). Monastics are some-times addressed in writing according to their monastic rank; for example, "Rasophore—monk (name)," "Stavrophore—monk (name)," or "Schemamonk (name)." The Abbot of a monastery is addressed as "The Very Reverend Abbot," whether he holds Priestly rank or not and whether or not he is an Archimandrite by rank. Under no circumstances whatsoever is an Orthodox monk addressed by laymen as "Brother." This is a Latin custom. The term "Brother" is used in Orthodox monasteries in two instances only: first, to designate beginners in the monastic life (novices or, in Greek, dokimoi ["those being tested"]), who are given a blessing, in the strictest tradition, to wear only the inner cassock and a monastic cap; and second, as an occasional, informal form of address between monastics themselves (including Bishops).


Again, as we noted above, a monk should never use his last name. This reflects the Orthodox understanding of monasticism, in which the monastic dies to his former self and abandons all that identified him in the world. Lay people are also called to respect a monk's death to his past. (In Greek practice, a monk sometimes forms a new last name from the name of his monastery. Thus a monk from the Saint Gregory Palamas Monastery [Mone Agiou Gregoriou Palama, in Greek] might take the name Agiogregorites.)


The titles which we have used for male monastics also apply to female monastics. In fact, a community of female monastics is often called a "monastery" rather than a convent (though there is nothing improper, as some wrongly claim, in calling a monastery for women a "convent"), just as the word "convent," in its strictest meaning, can apply to a monastic community of males, too. Women monastics are formally addressed in writing as "Nun (name)" or "Rasophore—nun (name)," etc., and the Abbess of a convent is addressed as "The Very Reverend Abbess." Though traditions for informal address vary, in most places, any monastic above the rank of Rasophore is called "Mother." Novices are addressed as "Sister."


There are, as we have noted, some differences in the way that Orthodox religious are addressed. What we have given above corresponds to a reasonably standardized vocabulary as one would find it in more traditional English—language Orthodox writings and among English—speaking Orthodox monastics.
at 01:38