Who is the Priest Melchizedek? 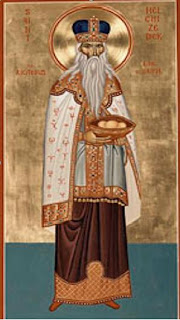 Melchizedek (from Hebrew מַלְכִּי־צֶדֶק melech-i-tzédek, literally "righteousness is my king") is an enigmatic figure twice mentioned in the Hebrew Bible, also known as the Old Testament. Melchizedek is mentioned as the King of Salem, and priest of God Most High, in the time of the biblical patriarch Abram. He brought out bread and wine, blessed Abram, and received tithes from him, Genesis 14:18-20. Reference is made to him in Psalm 110:4 where the victorious ruler is declared to be "priest forever after the order of Melchizedek."

He is commemorated as one of the Holy Forefathers in the Calendar of Saints of the Armenian Apostolic Church on July 26. He is mentioned in the Roman Canon, the First Eucharistic Prayer of the Roman rite.

Melchizedek (Hebrew: מלכי-צדק, Malkiy-tsedeq) is mentioned twice in the Hebrew Bible. The first occurs at Genesis 14:18-20, part of the larger story of Genesis 14:17-24 which tells how Abram returns from defeating king Chedorlaomer and his associates and meets with the king of Sodom, at which point (KJV translation):

The second is in Psalm 110:4, celebrating some victory or conquest of an unnamed king of the Davidic dynasty. The king is said to be a "priest forever" and a successor of Melchizedek, and the text is translated (KJV):


The LORD hath sworn, and will not repent, Thou art a priest for ever after the order of Melchizedek.

The Second Book of Enoch (also called "Slavonic Enoch") is apparently a Jewish sectarian work of the 1st century AD. The last section of the work, the Exaltation of Melchizedek, tells how Melchizedek was born of a virgin, Sofonim (or Sopanima), the wife of Nir, a brother of Noah. The child came out from his mother after she had died and sat on the bed beside her corpse, already physically developed, clothed, speaking and blessing the Lord, and marked with the badge of priesthood. Forty days later, Melchizedek was taken by the archangel Gabriel (Michael in some manuscripts) to the Garden of Eden and was thus preserved from the Deluge without having to be in Noah's Ark.

In the New Testament, references to Melchizedek appear only in the Epistle to the Hebrews (end I century AD). Jesus the Christ is there identified as a priest forever in the order of Melchizedek quoting from Ps. 110:4, and so Jesus assumes the role of High Priest once and for all. Abraham's transfer of goods to Melchizedek is seen to imply that Melchizedek is superior to Abraham, in that Abraham is tithing to him. Thus, Melchizedek's (Jesus') priesthood is superior to the Aaronic priesthood, and the Temple in Jerusalem is now unnecessary.

Rabbi Hana bar Bizna citing Rabbi Simeon Hasida identified Melchizedek as one of the four craftsmen of whom Zechariah wrote in Zechariah 2:3. (Babylonian Talmud Sukkah 52b; see also Song of Songs Rabbah 2:33 (crediting Rabbi Berekiah in the name of Rabbi Isaac).) The Talmud teaches that David wrote the Book of Psalms, including in it the work of the elders, including Melchizedek (in Psalm 110). (Babylonian Talmud Baba Batra 14b-15a.)

In the Masoretic (Hebrew) biblical text the name is written as two words ("malki zedek") and pointed as מַלְכִּי־צֶדֶק or מַלְכִּי־צָדֶק (pronounced in standard Hebrew as Malki-ẓédeq or Malki-ẓádeq and in Tiberian vocalization as Malkî-ṣéḏeq or Malkî-ṣāḏeq). In the Septuagint and the New Testament he appears as Μελχισεδέκ, and in the Latin Vulgate as Melchisedech. iIn the Authorised King James Version of 1611 he appeared as Melchizedek in the Old Testament and Melchisedec in the New Testament.

The Epistle to the Hebrews, along with Philo and Josephus, interprets the name as meaning "the king of righteousness", all apparently based on the Hebrew words "melek", meaning "King", and "tzedek" (or tzadik), meaning "righteous(ness)". This interpretation is held also by some modern scholars because in the Dead Sea Scroll 4QAmram 2.3 is found the opposite name Melchi-resha ("king of evil") for a chief angel of darkness.

While the interpretation "king of righteousness/righteous king" is not impossible, the word "malki" contains a possessive pronoun, and means "my king". The opinion of many modern scholars is that this interpretation is therefore unlikely, and that the original name was probably "[the god] Sedeq is my king", based on the attested Canaanite/Phoenician god "Suduk" or "Sudek", or, less likely, "My king is righteous(ness)".

And verily they that are of the sons of Levi, who receive the office of the priesthood, have a commandment to take tithes of the people according to the law, that is, of their brethren, though they come out of the loins of Abraham: But he whose descent is not counted from them received tithes of Abraham, and blessed him that had the promises" (Hebrews 7:5-6).

If therefore perfection were by the Levitical priesthood, (for under it the people received the law,) what further need was there that another priest should rise after the order of Melchisedec, and not be called after the order of Aaron? For the priesthood being changed, there is made of necessity a change also of the law" (Hebrews 7:11-12).

The author of the Epistle to the Hebrews in the New Testament discussed this subject considerably, listing the following reasons for why the priesthood of Melchizedek is superior to the Aaronic priesthood:

The epistle goes on to say that the covenant of Jesus is superior to the covenant the Levitical priesthood is under. Some Christians hold that Melchizedek was a type of Christ, and some other Christians hold that Melchizedek indeed was Christ. Reasons provided include that Melchizedek's name means "king of righteousness" according to the author of Hebrews, and that being king of Salem makes Melchizedek the "king of peace." Heb. 7:3 states, "Without father or mother, without genealogy, without beginning of days or end of life, like the Son of God he (Melchizedek) remains a priest forever." Melchizedek gave Abraham bread and wine, which Christians consider symbols of the body and blood of Jesus Christ, the sacrifice to confirm a covenant.

Catholics find the roots of their priesthood in the tradition of Melchizedek. (CCC 1544) In Genesis 14:18, Melchizedek offers a sacrifice of bread and wine. Christ therefore fulfilled the prophecy of Ps 110:4, that he would be a priest "after the order of Melchizedek," at the Last Supper, when he broke and shared bread with his disciples. Catholics take seriously Christ's command that the Apostles should "do this in memory of Me." As such, the Catholic Church continues to offer sacrifices of bread and wine at Mass, as part of the sacrament of the Eucharist.
at 08:16