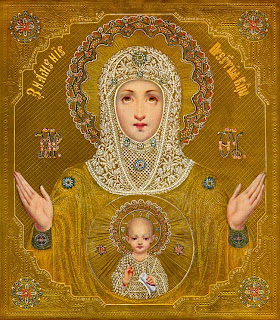 The Icon of Our Lady of the Sign (Greek: Panagia or Παναγία; Old Church Slavonic: Ikona Bozhey Materi "Znamenie"; Polish: Ikona Bogurodzicy "Znak" ') is the term for a particular type of icon of the Theotokos (Virgin Mary), facing the viewer directly, depicted either full length or half, with her hands raised in the orans position, and with the image of the Child Jesus depicted within a round aureole upon her breast.

The icon depicts the Theotokos during the Annunciation at the moment of saying, "May it be done to me according to your word."(Luke 1:38). The image of the Christ child represents him at the moment of his conception in the womb of the Virgin. He is depicted not as a fetus, but rather vested in divine robes, and often holding a scroll, symbolic of his role as teacher. Sometimes his robes are gold or white, symbolizing divine glory

; sometimes they are blue and red, symbolizing the two natures of Christ

. His face is depicted as that of an old man, indicating the Christian teaching that he was at one and the same time both a fully-human infant and fully the eternal God, one of the Trinity. His right hand is raised in blessing.

The term Virgin of the Sign or Our Lady of the Sign is a reference to the prophecy of Isaiah 7:14: "Therefore the Lord himself shall give you a sign; Behold, a virgin shall conceive, and bear a son, and shall call his name Immanuel". Such an image is often placed in the apse of the sanctuary of an Orthodox church above the Holy Table

As with most Orthodox icons of Mary

, the letters ΜΡ ΘΥ (short for ΜΗΤΗΡ ΘΕΟΥ, "Mother of God") are usually placed on the upper left and right of the head of the Virgin Mary.

This type of icon is also sometimes called Platytera

(Greek: Πλατυτέρα, literally wider or more spacious); poetically, by containing the Creator of the Universe in her womb, Mary has become Platytera ton ouranon (Πλατυτέρα των Ουρανών): "More spacious than the heavens".

The depiction of the Virgin Mary with her hands upraised in prayer ("orans") is of very ancient origin in Christian art. In the mausoleum of St Agnes in Rome is a depiction dating to the fourth century which depicts the Theotokos with hands raised in prayer and the infant Jesus sitting upon her knees. There is also an ancient Byzantine icon of the Mother of God "Nikopea" from the sixth century, where the Virgin Mary is depicted seated upon a throne and holding in her hands an oval shield with the image of "Emmanuel".

Icons of the Virgin, known as "The Sign", appeared in Russia during the eleventh to twelfth centuries. The icon became highly-venerated in Russia because of what Orthodox Christians believe to be the miraculous deliverance of Novgorod from invasion in the year 1170.
at 08:42