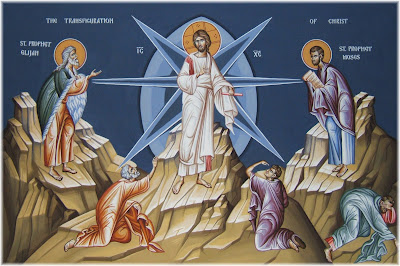 The Transfiguration of Jesus is an event reported by the Synoptic Gospels in which Jesus is transfigured upon a mountain (Mount Tabor) (Matthew 17:1-9, Mark 9:2-8, Luke 9:28-36). Jesus became radiant, spoke with Moses and Elijah, and was called "Son" by God. It is one of the miracles of Jesus mentioned in the Gospels.

This miracle is unique among others that appear in the Gospels, in that the miracle happens to Jesus himself. Thomas Aquinas considered the Transfiguration "the greatest miracle" in that it complemented Baptism and showed the perfection of life in Heaven.

According to the Gospels, Peter, James, son of Zebedee and John the Apostle were with Jesus upon the mountain. The transfiguration put Jesus above Moses and Elijah, the two preeminent figures of Judaism. It also supports his identity as the Son of God. In keeping with the Messianic Secret, Jesus tells the witnesses not to tell others what they saw until he has risen on the third day after his death on the cross.

The principal account is that in the Synoptic Gospels; 2 Peter and the Gospel of John may also briefly allude to the event (2 Peter 1:16-18, John 1:14). Peter describes himself as an eyewitness "of his sovereign majesty." None of the accounts identifies the "high mountain" of the scene by name. The earliest identification of the mountain as Mount Tabor is in the 5th century Transitus Beatae Mariae Virginis. RT France notes that Mount Hermon is closest to Caesarea Philippi, mentioned in the previous chapter of Matthew.

In the narrative, after the voice speaks, Elijah and Moses have disappeared, and Jesus and the three apostles head down the mountain, Jesus telling his apostles to keep the event a secret until the "Son of Man" had risen from the dead. The apostles are described as questioning among themselves as to what Jesus meant by "risen from the dead" (Mark 9:9-10). The apostles are also described as questioning Jesus about Elijah, and he as responding "Elijah is indeed coming and will restore all things; but I tell you that Elijah has already come […]" (Mark 9:12-13). It was commonly believed that Elijah would reappear before the coming of the Messiah, as predicted in the Book of Malachi (Malachi 4), and the three apostles are described as interpreting Jesus' statement as a reference to John the Baptist (Matthew 17:13).

Symbolic readings take Moses and Elijah to represent the Law and the Prophets respectively, and their recognition of and conversation with Jesus symbolize how Jesus fulfils "the law and the prophets" (Matthew 5:17-19).

Maximus the Confessor said that the senses of the apostles were likewise transfigured to enable them to perceive the true glory of Christ.

In the Syriac Orthodox, Indian Orthodox, Eastern Orthodoxy, Roman Catholic, and Anglican churches, the Feast of the Transfiguration is observed on 6 August and is considered a major feast, numbered among the twelve Great Feasts in Orthodoxy. In all these churches, if the feast falls on a Sunday, its liturgy takes the place of the Sunday liturgy. In some newly created liturgical calendars (e.g. the Lutheran and United Methodist) the last Sunday in the Epiphany season (that immediately preceding Ash Wednesday) is also devoted to this event. In the Church of Sweden and the Church of Finland, however, the Feast is celebrated on the seventh Sunday after Trinity, the eighth Sunday after Pentecost.

In the Eastern Orthodox Church, the Transfiguration falls during the Dormition Fast, but in recognition of the feast the fast is relaxed somewhat and the consumption of fish, wine and oil is allowed on this day.

In the Orthodox view the Transfiguration is not only a feast in honor of Jesus, but a feast of the Holy Trinity, for all three Persons of the Trinity are interpreted as being present at that moment: God the Father spoke from heaven; God the Son was the one being transfigured, and God the Holy Spirit was present in the form of a cloud. In this sense, the transfiguration is also considered the "Small Epiphany" (the "Great Epiphany" being the Baptism of Jesus, when the Holy Trinity appeared in a similar pattern).

The Tranfiguration is ranked as one of the Twelve Great Feasts of the Orthodox liturgical calendar, and is celebrated with an All-Night Vigil beginning on the eve of the Feast.

Grapes are traditionally brought to church to be blessed after the Divine Liturgy on the day of the Transfiguration. If grapes are not available in the area, apples or some other fruit may be brought. This begins the "Blessing of First Fruits" for the year.

In the Roman Catholic Church, the Transfiguration was once celebrated locally in various parts of the Catholic world on different days, including August 6, but was not universally recognized. In 1456, the Kingdom of Hungary repulsed an Ottoman invasion of the Balkans by breaking the Siege of Belgrade. News of the victory arrived in Rome on August 6. Given the importance to international politics at that time of such battles between Christian and Muslim nations, in celebration of the victory Pope Callixtus III elevated the Transfiguration to a Feast day to be celebrated in the entire Roman rite. In 2002, Pope John Paul II selected the Transfiguration as one of the five Luminous Mysteries of the rosary.

According to the Hesychast tradition of Eastern Orthodox spirituality, a completely purified saint who has attained divine union experiences the vision of divine radiance that is the same 'light' that was manifested to Jesus' disciples on Mount Tabor at the Transfiguration. This experience is referred to as theoria. Barlaam held this view of the hesychasts to be polytheistic inasmuch as it seemed to postulate two eternal (ousia) substances, essences, natures, beings, a visible (hypostases and energies) and an invisible (ousia), God.

Gregory Palamas defended Hesychasm in the 1340s at three different synods in Constantinople, and he also wrote a number of works in its defense. In these works, Gregory Palamas uses a distinction, already found in the 4th century in the works of the Cappadocian Fathers, between the energies or operations (Gr. energeies) of God and the essence (ousia) of God. Gregory taught that the energies or operations of God were uncreated. He taught that the essence of God can never be known by his creature even in the next life, but that his uncreated energies or operations can be known both in this life and in the next and convey to the Hesychast in this life and to the righteous in the next life a true spiritual knowledge of God (theoria). In Palamite theology, it is the uncreated energies of God that illumine the Hesychast who has been vouchsafed an experience of the Uncreated Light. In 1341 the dispute came before a synod held at Constantinople and presided over by the Emperor Andronicus; the synod, taking into account the regard in which the writings of the pseudo-Dionysius were held, condemned Barlaam, who recanted and returned to Calabria, afterwards becoming bishop in the Roman Catholic Church.

Instances of the Uncreated Light are read into the Old Testament by Orthodox Christians, e.g. the Burning Bush a purported descendant of which is kept at the St Catherine's Monastery on the Sinai Peninsula.


O wondrous type, O vision fair / of glory that the Church shall share / Which Christ upon the mountain shows / where brighter than the sun He glows / With shining face and bright array / Christ deigns to manifest today / What glory shall be theirs above / who joy in God with perfect love.

Roman Catholicism in recent years has become more open towards ideas of Hesychasm. Pope John Paul II repeatedly emphasized his respect for Eastern theology as an enrichment for the whole Church and even referred to Gregory Palamas as Saint. John Paul II also added the Transfiguration at Mount Tabor to the "mysteries of the Holy Rosary". Nevertheless, the Eastern doctrine of "uncreated light" remains unaccepted in much of the Western Church. The fundamental issue in this debate is the very nature of divine grace itself, which incidentally, is why the debate over the role of divine grace in justification between Protestants and Roman Catholics also is inexplicable in the terms of Eastern theological thought.

"Tabor Light" was also used in the popular press of 1938 in reference to a mysterious light seen around a cemetery near Tábor, Bohemia, and a similar phenomenon observed in Saskatchewan, Canada.
at 04:03