The Decalogue: The Ten Commandments of Many Religions 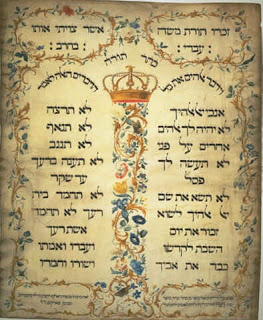 The Ten Commandments, or Decalogue (from Greek δεκάλογος), is a list of religious and moral imperatives that, according to the Hebrew Bible, were given by God to the people of Israel from the mountain referred to as Mount Sinai or Horeb. The Bible describes their initial form as an inscription on two stone tablets which God wrote with his finger, after which God gave the tablets to Moses. The Ten Commandments are recognized as a moral foundation in Judaism and Christianity, and their substance also figures in Islam and Baha'i Faith.

The text of the Ten Commandments appears in the Bible as two similar passages of length 14-15 verses, in Exodus 20:2–17 and Deuteronomy 5:6–21. These passages are referred to elsewhere in the Bible as the ten "devarim", which is the basis for dividing them into ten iotas.

The Ten Commandments declare the Lord, who brought the Israelites out of slavery in Egypt, to be God; prohibit having other gods before the Lord, and making or worshiping idols; threaten punishment for those who reject the Lord and promise love for those who love him; forbid misuse of the Lord's name; demand observance of the Sabbath and honoring one's parents; prohibit murder, adultery, theft, false testimony, and coveting of one's neighbor's goods. The scheme for partitioning the passages into ten units varies between religions and denominations, as do their translation, interpretation and significance.

In Biblical Hebrew, the commandments are called עשרת הדברים (transliterated Aseret ha-Dvarîm) and in Rabbinical Hebrew עשרת הדברות (transliterated Aseret ha-Dibrot), both translatable as "the ten words", "the ten sayings" or "the ten matters". The English name "Decalogue" is derived from the Greek translation δεκάλογος dekalogos "ten terms", found in the Septuagint at Exodus 34:28 and Deuteronomy 10:4.

According to the Bible, Moses remained 40 days and nights atop Mt. Sinai, also called Mount Horeb, receiving God's revelation. Moses then conveyed God's commandments to the Children of Israel in the third month after their Exodus from Egypt. Israel's receipt of the commandments occurred on the third day of preparations at the foot of the mount.

According to Jewish tradition, God's revelation at Mt. Sinai is a critical moment in the confirmation of the covenant between God and the nation of Israel, and one of the highpoints of Jewish history. Historians are divided as to the location of Mt. Sinai and whether all the tribes that would later constitute David's kingdom were present; some question whether it actually occurred.

The Ten Commandments were not the only laws revealed to Moses at Sinai. Exodus 21-23 contain a miscellany of laws conventionally called the "Book of the Covenant". These two revelations are not named until Exodus 24, which refers to a "book of the covenant"(Exodus 24:7) and "stone tablets" (Exodus 24:12) as two parts of the revelation.

While receiving the Ten Commandments and the Book of the Covenant, the Children of Israel compelled Aaron to build a calf out of molten gold to serve as an altar for sacrifices to God. Upon seeing this, Moses flung the stone tablets in anger Exodus 32:192; consequently, Moses had to re-ascend Mt. Sinai to receive a new set of tablets from God. This event occasions a recapitulation of the account of God's inscribing two stone tablets Exodus 34:1-4, and conveying the Book of the Covenant Exodus 34:10-28, in a highly condensed form in Exodus 34, what historians call "the Small Covenant Code."

The Torah had a single author and represents a coherent narrative. According to traditional sources, Exodus 20 represents God's first inscription of the ten commandments. Although Exodus 34 describes God inscribing a new set of tablets, it does not provide the contents of the new set. Rather, the contents of the second revelation is presented in Deuteronomy 5. Most importantly, an entire corpus of law is revealed to Moses and the Children of Israel at Mt. Sinai and during their wanderings in the desert. Therefore, the Children of Israel already possess this law when all the tribes enter the land of Canaan together, forming a loose tribal alliance, until the formation of a kingdom around 1,000 BC.

The lists known as the Ten Commandments are given in passages in two books of the Bible: Exodus 20:2–17 and Deuteronomy 5:6–21. These passages are provided in English below, using the New Revised Standard Version translation and formatting. Various religions and denominations group the commandments differently; see the Division of the Commandments section for a detailed accounting.

According to Jewish tradition, Exodus 20:2-17 constitutes God's first recitation and inscription of the Ten Commandments on two tablets, which Moses presented to the Children of Israel who had left Egypt before placing in the Ark of the covenant. Deuteronomy 5:6-20 consists of God's re-telling of the Ten Commandments to the generation born during the wandering in the desert, and after the revelation at Sinai, prior to their entry to the land of Canaan.

In the third century the Jews changed to the new Talmudic numbering for the Ten Commandments, along with taking out books from the Old Testament that pointed toward Jesus Christ being the Messiah, making the first commandment be, "I am the Lord your God". Previous to this, they used the same numbering that the Orthodox Christian Church still uses today:
Modern Talmudic Judaism also changes "covet" to "take".

In Islam Moses (Musa) is venerated as one of the greatest prophets of God. However, Islam also teaches that the texts of the Torah and the Gospels have been corrupted from their divine originals over the years, due to carelessness and self-interest. Despite this purported corruption, messages from the Torah and the Gospels still coincide closely with certain verses in the Qur'an. This is by-and-large the case with the Ten Commandments. Consequently, despite the Ten Commandments not being explicitly mentioned in the Qur'an they are substantially similar to the following verses in the Qur'an (using Jewish numbering of the Commandments):


In the 17th chapter, "Al-Israa" ("The Night Journey"), verses [Qur'an 17:22], the Qur'an provides a set of moral stipulations which are "among the (precepts of) wisdom, which thy Lord has revealed to thee" that can be reasonably categorised as ten in number. According to S. A. Nigosian, Professor of religious studies at the University of Toronto, these resemble the Ten Commandments in the Bible and "represents the fullest statement of the code of behavior every Muslim must follow".[56] However, these verses are not regarded by Islamic scholars as set apart from any other moral stipulations in the Qur'an, nor are they regarded as a substitute, replacement, or abrogation of some other set of commandments as found in the previous revelations.


The Ten Commandments in Buddhism refer to the 10 major precepts for Bodhisattvas.

The Brahma Net Sutra translated by Kumarajiva (circa 400 AD) has a list of ten major and forty-eight minor Bodhisattva vows. The ten major vows are as follows: