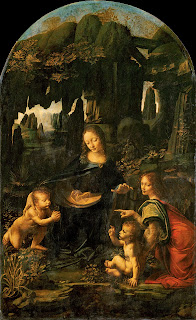 Saint Uriel the Archangel (אוּרִיאֵל "El/God is my light]", Auriel/Oriel (god is my light) Standard Hebrew Uriʾel, Tiberian Hebrew ʾÛrîʾēl) is one of the archangels of post-Exilic Rabbinic tradition

, and also of the ancient Christian traditions. His name may have analogies with Uriah.

In apocryphal, kabbalistic and occult works

(initially accepted by both the Jewish and Christian canons, but removed from the Jewish canon in late antiquity and rejected by the Protestant reformers in the 17th century).

Where a fourth archangel is added to the named three, to represent the four cardinal points, Uriel is generally the fourth. Uriel is listed as the fourth angel in Christian Gnostics (under the name Phanuel), by Gregory the Great

, and in the angelology of Pseudo-Dionysius

. However, the Book of Enoch

clearly distinguishes the two Angels; Uriel means 'the Light of God' while Phanuel has a different meaning. Uriel is the third angel listed in the Testament of Solomon

Uriel also appears in the Second Book of Esdras

, found in the Apocrypha section of many bibles, which makes up part of the apocalyptic literature of Esdras, in which the prophet Ezra asks God a series of questions, and Uriel is sent by God to instruct him. According to the Revelation of Esdras

, the angels that will rule at the end of the world are Michael, Gabriel, Uriel, Raphael, Gabuthelon, Beburos, Zebuleon, Aker, and Arphugitonos. The last five listed only appear in this book and nowhere else in apocryphal or apocalyptic works.

In Christian apocryphal gospels Uriel plays a role, differing between sources, in the rescue of Jesus's cousin John the Baptist from the Massacre of the Innocents ordered by King Herod. He carries John and his mother Saint Elizabeth to join the Holy Family after their Flight into Egypt. Their reunion is depicted in Leonardo da Vinci

's Virgin of the Rocks.

Uriel is often identified as a cherub and angel of repentance. He "stands at the Gate of Eden with a fiery sword," or as the angel who "watches over thunder and terror." In the Apocalypse of Peter he appears as the Angel of Repentance, who is graphically represented as being as pitiless as any demon. In the Life of Adam and Eve, Uriel is regarded as the spirit (i.e., one of the cherubs) of the third chapter of Genesis. He is also identified as one of the angels who helped bury Adam and Abel in Paradise.
Stemming from medieval Jewish mystical traditions, Uriel has also become the Angel of Sunday

), the Angel of Poetry, and one of the Holy Sephiroth

. Uriel is depicted as the destroyer of the hosts of Sennacherib.

He checked the doors of Egypt for lamb's blood during the plague. He also holds the key to the Pit during the End Times and led Abraham to the West.

In modern angelology, Uriel is identified variously as a seraph, cherub, regent of the sun, flame of God, angel of the Divine Presence, presider over Tartarus (hell), archangel of salvation, and, in later scriptures, identified with Phanuel "face of God." He is often depicted carrying a book or a papyrus scroll representing wisdom. Uriel is a patron of the Arts.

In the Eastern Orthodox Church, Uriel is commemorated together with the other archangels and angels with a feast day of the "Synaxis of the Archangel Michael and the Other Bodiless Powers" on November 8 of the liturgical calendar (for those churches which follow the Julian Calendar, November 8 falls on November 21 of the modern Gregorian Calendar). In addition, every Monday throughout the year is dedicated to the angels.

's Hierarchy of Blessed Angels (1635), Uriel is described as an Angel of the Earth. Heywood's list is actually of the Angels of the Four Winds: Uriel (south), Michael (east), Raphael (west) (serving also a governor of the south, with Uriel), and Gabriel (north). He is also listed as an Angel of the four winds in the medieval Jewish Book of the Angel Raziel which lists him as Usiel (Uzziel); according to it, this book was inscribed on a sapphire stone and handed down from Seraph to Metatron

and then to Adam.

At the Council of Rome of 745, Pope Zachary

, intending to clarify the Church's teaching on the subject of angels and curb a tendency toward angel worship, condemned obsession with angelic intervention and angelolatry, but reaffirmed the approval of the practice of the reverence of angels.

who lived in the dukedom of Ahtum in present day Banat invoked Uriel in rituals. This is witnessed by St. Gerard, Roman Catholic bishop of the area after 1028.

In Henry Wadsworth Longfellow's translation of The Golden Legend

, Uriel is one of the angels of the seven planets. Uriel is the angel of Mars. He is also listed as such in Benjamin Camfield's A Theological Discourse of Angels (1678).

Possibly Uriel's highest position is that of an Angel of Presence, Prince of Presence, Angel of the Face, Angel of Sanctification, Angel of Glory. A Prince of the Presence is an angel who is allowed to enter the presence of God. Uriel along with Suriel, Jehoel, Zagagel, Akatriel, Metatron, Yefefiah, Satanel, Michael, Gabriel, Raphael, and Nathanel (Zathael) holds this position. The Angel of His Presence

title is often taken to mean Shekinah but it and the other terms mentioned are also often used as alternate names for the angel Metatron. R. H. Charles comments in his translation of The Book Of Enoch

that in later Judaism "we find Uriel instead of Phanuel" as one of the four angels of the presence.
A scriptural reference to an angel of presence is found in Isaiah 63:9 —


In all their affliction he was afflicted, and the angel of his presence saved them: in his love and in his pity he redeemed them; and he bare them, and carried them all the days of old.

The Book of Enoch, written by Enoch, mentions Uriel in many of the component books. In Chapter IX which is part of "The Book of the Watchers" (2nd century BC) only four Angels are mentioned by name these are Michael, Uriel, Raphael, and Gabriel. However the later Chapter XX lists the name and function of seven archangels these are "Uriel, one of the holy angels, who is over the world and over Tartarus", Raphael, Raguel, Michael, Saraqâêl, Gabriel, and Remiel.

The Book of the Watchers as a whole tells us that Uriel, Raphael, and Gabriel were present before God to testify on behalf of Humankind. They wish to ask for divine intervention during the reign of the Fallen Gregori (Fallen Watchers

Then said the Most High, the Holy and Great One spake, and sent Uriel to the son of Lamech, and said to him:

"And Uriel said to me: 'Here shall stand the angels who have connected themselves with women, and their spirits assuming many different forms are defiling mankind and shall lead them astray into sacrificing to demons 'as gods', (here shall they stand,) till 'the day of' the great judgment in which they shall be judged till they are made an end of. And the women also of the angels who went astray shall become sirens.' And I, Enoch alone, saw the vision, the ends of all things; and no man shall see as I have seen."