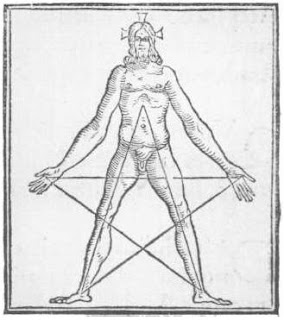 A pentagram (sometimes known as a pentalpha or pentangle or, more formally, as a star pentagon) is the shape of a five-pointed star drawn with five straight strokes. The word pentagram comes from the Greek word πεντάγραμμον (pentagrammon), a noun form of πεντάγραμμος (pentagrammos) or πεντέγραμμος (pentegrammos), a word meaning roughly "five-lined" or "five lines".

Pentagrams were used symbolically in ancient Greece and Babylonia, and are used today as a symbol of faith by many Wiccans, akin to the use of the cross by Christians and the Star of David by Jews. The pentagram has magical associations, and many people who practice Neopagan faiths wear jewelry incorporating the symbol. Christians once more commonly used the pentagram to represent the five wounds of Jesus. The pentagram has associations with Freemasonry and is also utilized by a number of other belief systems.

The word "pentacle" is sometimes used synonymously with "pentagram", and this usage is borne out by the Oxford English Dictionary, although that work specifies that a circumscription makes the shape more particularly a pentacle. Wiccans and Neo-pagans

often make use of this more specific definition for a pentagram enclosed in a circle.

The circle around a pentagram (transforming it in to a pentacle,) is a symbol of "unity, wholeness, infinity, the goddess, and protection. To earth-centered religions throughout history as well as to many contemporary pagans, it represents the feminine spirit or force, the cosmos or a spiritualism Mother Earth, and a sacred space." The five-pointed star is representative of the four primal elements (earth, air, fire and water,) and traditionally a fifth, called spirit. The circle binds them together to create life. When pointing up, the pentagram can represent spirituality's dominance over the material (pentagram) bound inside the laws of the cosmos (circle). The upside-down facing pentagram, meanwhile, represents the physical world ruling over the spiritual, and has therefore been associated with dark magic. Other sources point to its origin in Chinese five-element philosophy (feng shui

), as the natural balance between fire, water, earth, wood, and metal. This theory states that the direction it is pointing has nothing to do with good or evil, but rather the upside-down facing circle is for banishing. The circle is again for the concept the power within is bound by, this time for the circle of life.

The first known uses of the pentagram are found in Mesopotamian writings dating to about 3000 BC. The Sumerian pentagrams served as pictograms for the word "UB" meaning "corner, angle, nook; a small room, cavity, hole; pitfall," suggesting something very similar to the pentemychos (see below on the Pythagorean use for what pentemychos means). In René Labat

's index system of Sumerian hieroglyphs/pictograms it is shown with two points up. In the Babylonian context, the edges of the pentagram were probably orientations: forward, backward, left, right, and "above". These directions also had an astrological meaning, representing the five planets Jupiter, Mercury, Mars and Saturn, and Venus as the "Queen of Heaven" (Ishtar) above.

called the pentagram ὑγιεία Hygieia ("health"; also the Greek goddess of health, Hygieia), and saw in the pentagram a mathematical perfection (see Geometry section below).
The ancient Pythagorean pentagram was drawn with two points up and represented the doctrine of Pentemychos. Pentemychos means "five recesses" or "five chambers", also known as the pentagonas — the five-angle, and was the title of a work written by Pythagoras's teacher and friend Pherecydes of Syros. It was also the "place" where the first pre-cosmic offspring had to be put in order for the ordered cosmos to appear.

and others perpetuated the popularity of the pentagram as a magic symbol, keeping the Pythagorean attributions of elements to the five points. By the mid-19th century a further distinction had developed amongst occultists regarding the pentagram's orientation. With a single point upwards it depicted spirit presiding over the four elements of matter, and was essentially "good". However, the influential writer Eliphas Levi

called it evil whenever the symbol appeared the other way up.


"A reversed pentagram, with two points projecting upwards, is a symbol of evil and attracts sinister forces because it overturns the proper order of things and demonstrates the triumph of matter over spirit. It is the goat of lust attacking the heavens with its horns, a sign execrated by initiates."

"The flaming star, which, when turned upside down, is the hierolgyphic [sic] sign of the goat of Black Magic, whose head may be drawn in the star, the two horns at the top, the ears to the right and left, the beard at the bottom. It is the sign of antagonism and fatality. It is the goat of lust attacking the heavens with its horns."

"Let us keep the figure of the Five-pointed Star always upright, with the topmost triangle pointing to heaven, for it is the seat of wisdom, and if the figure is reversed, perversion and evil will be the result."

The pentagram is used as a Christian symbol for the five senses, and if the letters S, A, L, V, and S are inscribed in the points, it can be taken as a symbol of health (from Latin salus

Medieval Christians believed that the "pentalpha

" symbolizes the five wounds of Christ. The pentagram was believed to protect against witches and demons.

The pentagram figured in a heavily symbolic Arthurian romance: it appears on the shield of Sir Gawain in the 14th century poem Sir Gawain and the Green Knight. As the poet explains, the five points of the star each have five meanings: they represent the five senses, the five fingers, the five wounds of Christ, the five joys that Mary had of Jesus (the Annunciation, the Nativity, the Resurrection, the Ascension, and the Assumption), and the five virtues of knighthood which Gawain hopes to embody: noble generosity, fellowship, purity, courtesy, and compassion.

The Church of Jesus Christ of Latter-day Saints

began using used both upright and inverted five-pointed stars in Temple architecture, dating back to the Nauvoo Illinois Temple, which was dedicated on April 30th, 1846. Other temples decorated with five-pointed stars in both orientations include the Salt Lake Temple, and the Logan Temple. These symbols derived from traditional Morning Star (Lucifer) pentagrams that are not used by Christian denominations.

Many Neopagans, especially Wiccans, use the pentagram as a symbol of faith similar to the Christian cross or the Jewish Star of David. It is not, however, a universal symbol for Neopaganism, and is rarely used by Reconstructionists

. Its religious symbolism is commonly explained by reference to the neo-Pythagorean understanding that the five vertices of the pentagram represent the four elements with the addition of Spirit as the uppermost point. As a representation of the elements, the pentagram is involved in the Wiccan practice of summoning the elemental spirits of the four directions at the beginning of a ritual.

The outer circle of the circumscribed pentagram is sometimes interpreted as binding the elements together or bringing them into harmony with each other. The Neopagan pentagram is generally displayed with one point up, partly because of the "inverted" goat's head pentagram's association with Satanism; however, within traditional forms of Wicca a pentagram with two points up is associated with the Second Degree Initiation and in this context has no relation to Satanism.

Satanists use a pentagram with two points up, often inscribed in a double circle, with the head of a goat inside the pentagram. This is referred to as the Sigil of Baphomet. They use it much the same way as the Pythagoreans, as Tartaros literally translates from Greek as a "Pit" or "Void" in Christian terminology (the word is used as such in the Bible, referring to the place where the fallen angels are fettered). The Pythagorean Greek letters are most often replaced by the Hebrew letters לויתן forming the name Leviathan

. Less esoteric LaVeyan Satanists use it as a sign of rebellion or religious identification, the three downward points symbolising rejection of the holy Trinity.

also made use of the pentagram and in his Thelemic system of magick: an adverse or inverted pentagram represents the descent of spirit into matter, according to the interpretation of Lon Milo DuQuette. Crowley contradicted his old comrades in the Hermetic Order of the Golden Dawn, who following Levi considered this orientation of the symbol evil and associated it with the triumph of matter over spirit.

The five-pointed star is the symbol of the Bahá'í Faith. In the Bahá'í Faith, the star is known as the Haykal (Arabic: "temple"‎), and it was initiated and established by the Báb. Both the Báb and Bahá'u'lláh wrote various works in the form of a pentagram.

(TCM) even today. As the Wu Xing is of great antiquity and the silk road had been open to Europe since before the Roman Empire it is quite likely that this medical system was imported to Europe as a misunderstood and exotic practice involving spirits (Shen

While a solid five-pointed star is found on many flags, the pentagram is relatively rare. It appears on two national flags, those of Ethiopia

and Morocco and in some coats of arms.

According to Ivan Sache, on the Moroccan flags, the pentagram represents the link between God and the nation. It is also possible that both flags use the pentagram as a symbol of King Solomon (Seal of Solomon

), the archetypal wise king of Jewish, Christian and Muslim lore, although the Star of David is a more common and more widely accepted symbol.

The Order of the Eastern Star, a fraternal organization associated with Freemasonry

, has employed a point-down pentagram as its symbol, with the five isosceles triangles of the points colored red, blue, yellow, white and green. This is an older form of the order's emblem and it is now more commonly depicted with the central pentagon rotated 36° so that it is no longer strictly a pentagram.

In Japanese culture, the pentagram (五芒星 gobōsei) is a symbol of magical power, associated with the onmyoji Abe no Seimei

; it is a diagram of the "overcoming cycle" of the five Chinese elements

. As a predominantly non-Christian country, with a different set of associations attached to the symbol, there is no social stigma associated with it.
at 11:17