Chinese ready for upheaval, sex in Year of the Rabbit 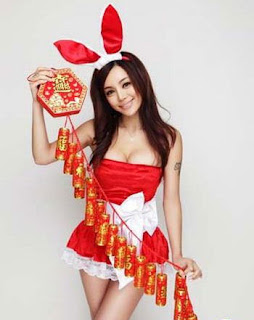 The Chinese Year of the Rabbit promises to bring political upheaval from restless youth and sex scandals for the amorous, but in China the government is at least likely to bring inflation under control.

, with each year having its own peculiar and unique beliefs, some specific to certain provinces, such as being an auspicious time to give birth or open a new business.

The rabbit is believed to be one of the happiest signs, with people born in that year renowned for their kindness, reliability and loyalty, though with an air of mystery and propensity to cry.

"The Rabbit represents mid-spring when trees and plants are prospering," said Raymond Lo

"It represents youth, motion and activity and so it will be an energetic year with new movements of young people and more young people demanding changes and reform in politics," he added.

The rabbit, whose year begins on February 3 and is marked by a week-long holiday in China, is also known for romance.

"As such, it will be a year of more sex scandals and sexual affairs," Lo said.

e, both of whom are rabbits, born in 1963 and 1975 respectively, may be taking a risk if they choose the coming year to finally tie the knot, said well-known Taiwan fortune teller Chan Wei-chung

"Angelina Jolie has two guardian gods, which means one will make sure that her career will flow like a fish in water, and she will make a great fortune. The other god will take care of her relationship," he told Reuters.

"She is very stable in her relationship and won't be too influenced by it; she will be very relaxed about it. But the one who will feel pressure and discomfort, who is likely to feel hurt and want to escape, will be her partner, Brad Pitt."

Economically, China will finally manage to get inflation under control in the second half of the year, CLSA Asia-Pacific Markets

While such traditional beliefs are widespread in Hong Kong, Taiwan and the overseas Chinese world, they have been discouraged by the officially atheist Communist Party in mainland China

Yet superstition is common in China, and certain popular beliefs have surged in popularity following landmark economic reforms started in the late 1970s.

Chinese cities will resound with firecrackers and fireworks during the festival, which are believed to scare off evil spirits and attract the god of wealth to people's doorsteps.

There are many taboos too. Washing your hair signifies washing away good luck, while the word for "four" is avoided, as it sounds like the word for "death".

"My father says we can't pick up the red fireworks

casings from the ground in the courtyard. If we leave them it will be a good omen for next year and everyone will get wealthy," said Wang Fang

Feng Rongxin, a 52-year-old Beijing office worker, said people born in the Year of the Rabbit must wear red clothing and jewellery to ensure good fortune, and that setting the right atmosphere at home

"In my family, we'll make sure the house has a decorative rabbit feel. We'll put at least one rabbit (decoration) in the house for each member of the family, and with 14 people, that's a lot of rabbits," she said.

are reporting a brisk trade in the animals.

But People for the Ethical Treatment of Animals

, and you can do so by refusing to support the pet trade that causes so many animals to suffer," the group's Maggie Chen