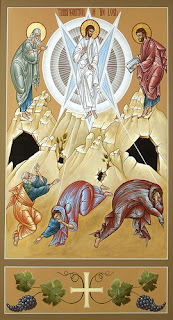 Science cannot explain a mystery of the cloud, that every year descends on Mount Tabor where, according to the Bible, the Transfiguration of the Lord

Sergey Mirov, a participant in the research organized this summer by the working group on miraculous signs at the Synodal Theological Commission, the investigation was conducted by Russian and Israeli meteorologists, the Komsomolskaya Pravda daily writes.

According to him, summing up the results, the experts concluded that fog cannot be generated in such dry air and temperature.

Mirov stressed that the "descending of the blessed cloud" takes place only in the territory of the Orthodox monastery. He said that during the festival service (the miraculous phenomenon happens on the Orthodox feast of Transfiguration) a glaring sphere rushes over believers, then the cloud appears above the cross of the Transfiguration Church, it grows in dimensions and descends on believers, covering them and pouring life-giving moisture over them.

In his turn Pavel Florensky, Russian Academy of Natural Sciences academician and head of the working group on miraculous signs, said that his team examined the appearance of the Holy Fire at the Church of the Holy Sepulchre in Jerusalem

on Easter eve with the help of modern highly accurate equipment.

"The conclusion is simple: the appearance of fire is accompanied with powerful piezoelectrical phenomenon in the church and adjacent territories similar to those that take place during thunderstorms, but there was no thunderstorm... Thus, it means that this event can be considered miraculous," he believes.

Mount Tabor (Hebrew: Har Tavor) is a hill rising 500m above the Jezreel Valley in the region of Galilee. Due to its strategic location along the north-south road, it has been an important fortress since ancient times. Christians have identified a rock atop Mt. Tabor as the place of the Transfiguration of Christ since the 4th century AD.

when after the conclusion of the Divine Liturgy the faithful go outside and prayerfully begin to sing hymns. This miracle occurs no matter how clear the sky may be every year and is an observable fact. And it happens at the same time every year, at approximately 4:00 AM with the conclusion of the Divine Liturgy. In this case, it is very similar to the Holy Light which appears every year at the same time at the Holy Sepulchre on Easter. This Holy Cloud only descends upon the Orthodox monastery on Mount Tabor and not on the other heterodox churches on the mountain. When the Holy Cloud descends it brightens the area with a fragrant reddish-white (some say orange) color in the midst of the night. The fragrance spreads like incense, though it is distinct from incense. The faithful take in this experience and glorify God for the blessing and sanctification which the Holy Cloud brings. As the faithful continue their hymns to God, the cloud fades away. The faithful depart with great joy for being witnesses of this great annual miracle which confirms their Holy Orthodox Faith. Among those who attend are believers and unbelievers, Greeks, Russians, Bulgarians, Romanians and others.


Some of you will remember Archbishop Nikolai of the Patriarchal Jurisdiction who was bishop in this area a long time ago. When I was visiting him one time, he told me how it was when he was an archimandrite in the Middle East a very long time ago. In those days, he always had to go to Mount Tabor to serve the Liturgy on this feast-day [Feast of the Holy Transfiguration (Aug. 6/19)].

Always on the feast of the Transfiguration (and I didn’t realize it, but I learned this year that it happens on both Old and New calendars), at night-time, at the time of the vigil (which would have been last night for us), there are clouds already gathering around the top of Mount Tabor. (At this time of year in Palestine there are no clouds at all – just sun, sun, sun.) The people go into the church on the top of Mount Tabor, and they are praying in the middle of the night. During this time, this cloud, which is not exactly like ordinary clouds (they say it has a different quality of some sort), comes down on top of the mountain. Archbishop Nikolai says that instead of bringing all their fruit into the church, the people leave it outside. The cloud comes down, and when they come out of the church in the early morning, everything is all wet. The people understand that God, Himself, has blessed their fruit. This happens every year.

I heard from someone who just came back from there (who was there on August 6th on the New Calendar) and it happened then, too. It is happening on both feasts. The Lord doesn’t care too much about the calendar; He cares about us, and reassuring us with His love. He does things like this. It is the same with the Holy Fire in Jerusalem at Pascha that comes every year. He does these things in order to reassure us, to encourage us, to give us strength, and determination to carry on, knowing that He is with us.

Maybe you, and I will never be on Mount Tabor on this feast. However, we know those who have had the blessing to be there, and we know that the words of today’s Gospel are true. What happened then continues to happen now. The Lord is with us. That’s the point. The Lord loves us. He is ready to renew us, and to transform us. Let us do our best to follow the words of St Herman of Alaska

, who says to us: “From this day, from this hour, from this minute, let us love God above all, and do His holy will”, and in so doing, glorify the all-holy Trinity: the Father, the Son, and the Holy Spirit, now, and ever, and unto the ages of ages. Amen.

[Note: There are three churches of three different denominations on Mount Tabor. It should be noted that this miracle only occurs over the Orthodox church.]
at 11:15