Why A Chinese Buddhist Became an Orthodox Athonite Monk 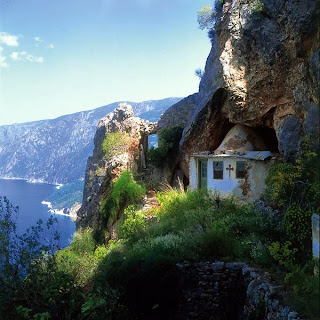 On my last trip to Mount Athos

I visited the Monastery of Simonopetra

. It is a majestic monastery and the sky was fully blue. There I met a graceful novice monk from China. In truth, he surprised me by his presence. An Orthodox rason on a Chinese man? I was moved somewhat. I had never seen this before up close, only in pictures of missions. An inheritor of a great cultural tradition and for him to embrace Christianity? My friends and I got curious to ask him about this.


"Brother, how did you, a Chinese man, embrace Orthodox Christian monasticism

coming from such a great cultural tradition

"Yes, of course, I was a Buddhist

"What won you over to Christianity?"

"Yes, yes, Father, hahahahaha!", he laughed, since with every three words the Chinese seem to laugh at two. "In Buddhism, my Father, you are very very much alone. There is no God. Your entire struggle is with yourself. You are alone with yourself, with your ego. You are totally alone in this path. Great loneliness Father. But here you have an assistant, a companion and a fellow-traveler in God. You are not alone. You have someone who loves you, who cares about you. He cares even if you don't understand Him. You speak with Him. You tell Him how you feel, what you would have hoped for - there is a relationship. You are not alone in the difficult struggles of life and spiritual perfection."

I realized things in those days. A severe cold bound me to bed. No doctor could find anything wrong with me. The clinical picture was clear, at least the doctors couldn't see anything. The pain was unbearable and there was absolutely no pain killer that could stop it. I changed three different pain killers and still the pain was not alleviated.

At this time I got the news that the brother of my father, whose name I bear, had an advanced form of cancer in the vocal cords and larynx. He had a largyngectomy. It was the result of chronic alcohol consumption and smoking. Generally he lived a bad life, without any quality.

Then I felt something a former Buddhist

and now a Christian monk on Mount Athos told me, that you need to have a God you can talk to; to perceive and to feel someone besides yourself Who hears you.

I don't know if it's wrong or right. I only know it is a deep need of man. This is evidenced by life itself. Even these Buddhists, who are from a non-theistic religion, created various deities. Even in dream language and worlds. But they have a need to refer to someone, to something, someone beyond and outside themselves, even if it's dreamy. Besides, reality and truth is something very relevant and will always remain so. It is an enigma, a mystery."

At this I remembered the words of Saint Gregory the Theologian

, who had a sensitive and melancholic nature, when he said: "When you are not well, or not feeling so, speak. Speak even if it is to the wind."
at 13:30