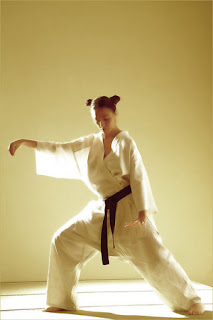 Tai chi chuan (traditional Chinese: 太極拳; simplified Chinese: 太极拳; pinyin: tàijíquán; Wade-Giles: t'ai4 chi2 ch'üan2) is an internal Chinese martial art often practiced for health reasons. Tai chi is typically practiced for a variety of reasons: its soft martial techniques, demonstration competitions, health and longevity. Consequently, a multitude of training forms exist, both traditional and modern, which correspond to those aims. Some of tai chi chuan's training forms are well known to Westerners as the slow motion routines that groups of people practice together every morning in parks around the world, particularly in China.

The Mandarin term "t'ai chi ch'uan" literally translates as "supreme ultimate fist", "boundless fist," or "great extremes boxing" (note that 'chi' in this instance is an earlier romanization of modern 'ji', not to be confused with the use of 'chi' in the sense of 'life-force' or 'energy', which is an earlier romanization of modern 'qi'). The concept of the "supreme ultimate" appears in both Taoist and Confucian Chinese philosophy where it represents the fusion or mother of Yin and Yang into a single ultimate represented by the Taijitu symbol. Thus, tai chi theory and practice evolved in agreement with many of the principles of Chinese philosophy including both Taoism and Confucianism.

Many styles list in their history that tai chi was originally formulated by a Taoist monk called Zhang Sanfeng and taught by him in the Taoist monasteries at Wu Tang Shan.

When tracing tai chi chuan's formative influences to Taoist and Buddhist monasteries, there seems little more to go on than the legendary tales from a modern historical perspective, but tai chi chuan's practical connection to and dependence upon the theories of Sung dynasty Neo-Confucianism (a conscious synthesis of Taoist, Buddhist and Confucian traditions, especially the teachings of Mencius) is claimed by some traditional schools. The philosophical and political landscape of that time in Chinese history is fairly well documented. Tai chi's theories and practice are therefore believed by these schools to have been formulated by the Taoist monk Zhang Sanfeng in the 12th century, at about the same time that the principles of the Neo-Confucian school were making themselves felt in Chinese intellectual life.

In these legends, Zhang Sanfeng as a young man studied Tao Yin (導引, Pinyin dǎoyǐn) breathing exercises from his Taoist teachers and martial arts at the Buddhist Shaolin monastery, eventually combining the martial forms and breathing exercises to formulate the soft or internal principles we associate with tai chi chuan and related martial arts. Zhang Sanfeng is also sometimes attributed with the creation of the original 13 Movements of Tai Chi Chuan. These 13 movements are in all forms of tai chi chuan. Its subsequent fame attributed to his teaching, Wu Tang monastery was known thereafter as an important martial center for many centuries, its many styles of internal kung fu preserved and refined at various Taoist temples.

The philosophy of the style is that if one uses hardness to resist violent force, then both sides are certain to be injured at least to some degree. Such injury, according to tai chi theory, is a natural consequence of meeting brute force with brute force. Instead, students are taught not to directly fight or resist an incoming force, but to meet it in softness and follow its motion while remaining in physical contact until the incoming force of attack exhausts itself or can be safely redirected, meeting yang with yin. Done correctly, this yin/yang or yang/yin balance in combat, or in a broader philosophical sense, is a primary goal of tai chi chuan training. Lao Tzu provided the archetype for this in the Tao Te Ching when he wrote, "The soft and the pliable will defeat the hard and strong."

Along with Yoga, tai chi is one of the fastest growing fitness and health maintenance activities in the United States.

Before tai chi's introduction to Western students, the health benefits of tai chi chuan were largely explained through the lens of traditional Chinese medicine, which is based on a view of the body and healing mechanisms not always studied by modern science. Today, some prominent tai chi teachers have advocated subjecting tai chi to rigorous scientific studies to gain acceptance in the West. Researchers have found that long-term tai chi practice shows favorable effects on the promotion of balance control, flexibility, cardiovascular fitness and reduced the risk of falls in elderly patients. The studies also show some reduced pain, stress and anxiety in healthy subjects. Other studies have indicated improved cardiovascular and respiratory function in healthy subjects as well as those who had undergone coronary artery bypass surgery.

Tai chi and neijia in general play a large role in many wuxia novels, films, and television series; among which are Yuen Wo Ping's Tai Chi Master starring Jet Li, and the popular Crouching Tiger, Hidden Dragon. A movie that features a traditional tai chi chuan teacher as the lead character is Pushing Hands, Ang Lee's first western film. It is also used as the basis for fictional "Waterbending" in Avatar the Last Airbender.In the video game Dead or Alive, Lei Fang uses Tai chi chuan. Internal concepts may even be the subject of parody, such as in Shaolin Soccer and Kung Fu Hustle. Fictional portrayals often refer to Zhang Sanfeng and the Taoist monasteries on Wudangshan.

Qigong, and its intimate relation to the Chinese martial arts and traditional Chinese medicine, are often associated with spirituality. This link is much stronger than with other techniques in traditional Chinese medicine. Qigong was historically practiced in Taoist and Buddhist monasteries as an aid to concentration as well as martial arts training, and the health benefits of martial qigong practice have recently been confirmed in western medical studies. In addition, the traditional teaching methods of most qigong schools (at least in Asia) descend from the strict teacher-disciple relationship conventions inherited in Chinese culture from Confucianism.

Qigong (or ch'i kung) refers to a wide variety of traditional cultivation practices that involve methods of accumulating, circulating, and working with Qi or energy within the body. Qigong is sometimes mistakenly said to always involve movement and/or regulated breathing; in fact, use of special methods of focusing on particular energy centers in and around the body are common in the higher level or evolved forms of Qigong. Qigong is practised for health maintenance purposes, as a therapeutic intervention, as a medical profession, a spiritual path and/or component of Chinese martial arts.

In some styles of qigong, it is taught that humanity and nature are inseparable, and any belief otherwise is held to be an artificial discrimination based on a limited, two-dimensional view of human life. According to this philosophy, access to higher energy states and the subsequent health benefits said to be provided by these higher states is possible through the principle of cultivating virtue (de or te 德, see Tao Te Ching, chapters 16, 19, 28, 32, 37, and 57). Cultivating virtue could be described as a process by which one comes to realize that one was never separated from the primal, undifferentiated state of being free of artificial discrimination that is the true nature of the universe. Progress toward this goal can be made with the aid of deep relaxation (meditation), and deep relaxation is facilitated by the practice of qigong.
at 12:46

I am also a fan of qigong, thank you for the article, thank you for sharing！
My blog on the subject of Chinese medicine and qigong
http://www.365tcm.com