Bright Week of the Paschal-Tide 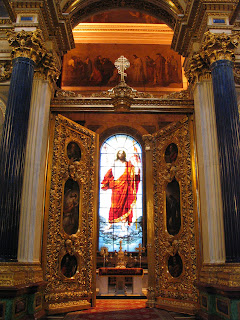 Bright Week or Renewal Week is the name used by the Eastern Orthodox Church and Eastern Catholic Churches of the Byzantine Rite for the period of seven days beginning on Pascha (Easter) and continuing up to (but not including) the following Sunday, which is known as Thomas Sunday. Latin Rite and other Christian groups such as Anglicans refer to this period as Easter Week, not to be confused with the Octave of Easter, which includes the following Sunday.

The entire week following Pascha is to be set aside by Orthodox Christians for the celebration of the Resurrection. According to the 66th canon of the Council in Trullo: "from the holy day of the Resurrection of Christ our God until New Sunday (i.e. Thomas Sunday) for a whole week the faithful in the holy churches should continually be repeating psalms, hymns and spiritual songs, rejoicing and celebrating Christ, and attending to the reading of the Divine Scriptures and delighting in the Holy Mysteries. For in this way shall we be exalted with Christ; raised up together with Him. For this reason on the aforesaid days that by no means there be any horse races or any other public spectacle". In Imperial Russia, the taverns used to be closed during Bright Week, and no alcoholic beverages were sold.

The entire week is considered to be one continuous day, and the name of each day of the week is called "Bright" (e.g., "Bright Monday"). Every service during the week is completely different than at any other time of the year. Everything in the services is sung joyfully rather than read. Normally, the entire Psalter is read during the course of a week (and twice a week during Great Lent), but during Bright Week no psalms at all are read. Each of the Little Hours is replaced by a special service known as the Paschal Hours. The normal Prayers Before Communion are replaced with the Paschal Canon.

The hymns chanted every day are identical to those chanted on the Sunday of Pascha, with the exception of a few parts that are taken from the Octoechos (the "Book of the Eight Tones"). Each day has a different tone assigned to it: Easter Sunday is Tone One, Bright Monday is Tone Two, and so on through the eight tones (skipping Tone Seven, the "Grave Tone"):
During all of Bright Week the Holy Doors on the Iconostasis are kept open—the only time of the year when this occurs. The open doors represent the stone rolled away from the Tomb of Christ, and the Epitaphios (Slavonic: Plashchanitza), representing the burial clothes, is visible through them on the Holy Table (altar). The doors are closed before the Ninth Hour on the eve of Thomas Sunday. However, the Afterfeast of Pascha will continue until the eve of the Ascension.

In Bright Week the normal fasting rules are suspended, and the entire week is fast-free, with special Paschal foods, such as pascha (a special dish made of cheese, eggs and other products that were forbidden during Great Lent), kulich and other easter breads being eaten every day. Red Easter eggs are blessed at the end of the Paschal Vigil, and are eaten throughout Bright Week (though some are usually reserved for Radonitza).
At the end of Vespers on the Sunday of Pascha there is a Cross Procession three times around the church, at which the Icon of the Resurrection and the Artos are carried. On the last circuit, there is a reading from the Gospel and the priest sprinkles the faithful with holy water. On Bright Monday through Bright Saturday, this Cross Procession takes place in the same manner after Matins or the Divine Liturgy.

The Artos is a loaf of leavened bread that was blessed during the Paschal Vigil, and is symbolic of the physical presence of the Resurrected Christ among the Apostles. This Artos is kept in the church during Bright Week, either in the nave, next to the Icon of the Resurrection; in front of the Icon of Christ on the Iconostasis; or in front of the Holy Doors. Throughout the week, whenever anyone enters the church, he or she kisses the Artos, as a means of symbolically greeting the resurrected Christ.

On Bright Friday, in addition to the normal Paschal hymns and the hymns from the Octoechos, special stichera and a canon in honor of the Theotokos (Mother of God) are chanted in commemoration of her Icon of the "Life-giving Spring."

On Bright Saturday, after the Divine Liturgy, the priest says a prayer over the Artos and it is broken up and distributed to the faithful.

Bright Week begins the liturgical season known as the Pentecostarion, the period of fifty days which begins on Pascha and continues to Pentecost and its afterfeast. Every day throughout the coming year is dependent upon the date of Pascha for determining both the Tone of the Week (Octoechos) and the Epistle and Gospel readings.

If it becomes necessary to celebrate a funeral during Bright Week, even this service is radically different, and follows for the most part the format for Paschal Matins, with only a few funeral hymns being chanted. It is held that those Orthodox Christians who die in penitence during this time are released from the bonds of their sins and are accepted into the Kingdom of Heaven.
at 02:15