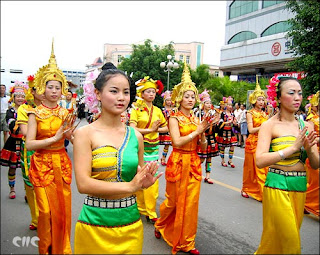 The Water Festival (Thai:Songkran:สงกรานต์) is the form New Year celebrations take in Southeast Asian countries such as Thailand, Burma, Cambodia, Laos and the Chinese province Yunnan on the day of the full moon of the 11th month of each year. It is called the 'Water Festival' by Westerners because people throw water at one another as part of the cleansing ritual to welcome the new year. Traditionally people gently sprinkled water on one another as a sign of respect, but as the new year falls during the hottest month in South East Asia, many people end up dousing strangers and passersby in vehicles in boisterous celebration.

The festival has many different names specific to each country, such as Songkran in Thailand and Pi-Mai Lao in Laos (translates as "New Year"), Chaul Chnam Thmey in Cambodia, and Thingyan in Myanmar. The New Year is celebrated in other South Asian countries, based on the astrological event of the sun beginning its northward journey. Traditional dance, singing and cultural shows are performed together during the festival. Religious activities in the tradition of Theravada Buddhism are also carried out at both Pagoda and Monastery. Young people visit elders to pay respect during this period.

The annual Water Splashing Festival of the Dai ethnic minority falls during the New Year celebrations of the Dai Calendar. It is the most important festival observed by the Dai ethnic people of Xishuangbanna Prefecture, and, similar to neighboring Thailand's SongKran Festival, it involves three days of celebrations that include sincere, yet light-hearted religious rituals that invariably end in merrymaking, where everyone ends up getting splashed, sprayed or doused with water.

During the first two days of the festival, a dragon boat race is held to ring out the old year (the first day of the festival) and to ring in the new (the second day of the festival). The third day, the climax of the festival, is reserved for water splashing. On that day, the Dai put on their newest and best clothes, then assemble at the local Buddhist temple, where the monks chant Buddhist scriptures. Afterward, a symbolic water splashing ritual is enacted whereby a Buddhist statue, with pomp and ceremony, is first coaxed out of the temple to the courtyard, then is splashed with water. This important ritual is called 'Bathing the Buddha'.

The completion of the 'Bathing the Buddha' ritual serves as the signal that encourages ordinary mortals to themselves engage in mutual water splashing. Accordingly, people flock to the streets with pots, pans, bottles, or whatever, where they uninhibitedly splash, spray and douse each other with water, with the same gusto with which Westerners engage in a good snowball free-for-all.

The Water Splashing ceremony, however, is more than just good-natured fun; it also contains a religious element: water is regarded by the Dai as a symbol, firstly, of religious purity, but also of goodwill among people. Therefore, splashing a fellow human being with water during the Water Splashing Festival, whether a close neighbor or a fellow villager, or even a stranger, is an expression of the desire for good luck and prosperity to that person.

For the tourist interested in interacting directly with the Dai ethnic minority of XiShangBanNa Prefecture in an informal and fun-filled manner, the annual Water Splashing Festival that takes place in the month of April is the perfect occasion. China Highlights offers a special tour to the city of Jinghong each year to coincide with the Dai ethinic minority's annual Water Splashing Festival.

The Water Splashing Festival practiced by the De'angs, which usually occurs around mid-April, is similar in some ways to that of the Dais. Nearing the festival, people are busy preparing new clothing, rice cakes, water dragons and barrels. The elders gather in the temple and build a small room where the Sakyamuni ceremony worship takes place. Here, the water dragon, carved out of a huge wood block four to five meters long, is erected. It is painted and equipped with grooves.

Girls carry a basin full of water, which flows to the Buddha figure in the small room through the groove. The elder of prestige then carries flowers, which he dips in the water and spreads the water over people to bless them for luck and a good start in the New Year. At this time, people become excited, wishing each other the New Year's greetings. Young people lift barrels over their heads, pouring water on the hands of the elders to bless everybody with a happy life, good health and longevity.

The elders extend their hands and hold water in greeting and blessing the young people. After the ceremony, people form a line behind the elephant-leg drum, streaming on the spring side, riverbank and start singing, dancing, chasing and splashing each other.

The Water Splashing Festival is considered the ceremony the De'angs celebrates in the New Year and an opportunity to scope out their lovers. Sending the bamboo basket is popular among the De'angs. Late at night, boys visit girls and present baskets to them; the most beautiful one is kept for his beloved girl to express his love and to get her feedback.

Hence, every girl can get several baskets, but the final lover is determined at the Water Splashing Festival depending on whose basket the girl will carry. That day, as every girl carries a pretty basket the boys observe the baskets on the girls' backs to see which one belongs to him. When the two lovers meet, they splash water on each other to express their agitation and gladness.

The Achang ethnic minority celebrates the same Water-Splashing Festival as the Dai ethnic minority. It is also a good opportunity for the youths to choose their lovers. Girls' families often prepare eight delicious dishes to welcome the boys coming to court them. Only when all of the guests have arrived can everyone get seated. One boy has to walk off with a chicken's head from the girl's family under cover and, as punishment, he has to drink wine if the girl discovers the chicken head; otherwise, the girl must drink. If the pilferer is caught on the spot, he will not only be penalized but also teased by girls. After the meal, he has to give money to the girl based on the cost of the dishes without being noticed.

The festival often falls at the same time as the Christian holiday known in English and German as Easter.
at 04:22