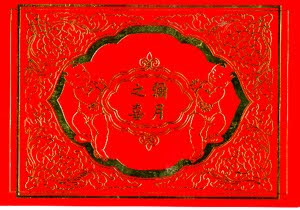 Red Egg and Ginger Party where proud parents introduced their new baby to friends and relatives. Traditionally, a newborn was not given a name or formally accepted into the family until this time because, as in other countries, infant mortality rates in China were quite high. A baby who reached one month of age was likely to survive, and so the event was celebrated.

The naming of the baby was very important because the Chinese believed that one's name can influence everything that happens in life. In selecting a name for the baby, it was up to the family to decide if the given name will be the child's formal name or a "milk name."

The milk name is a nickname used until the child starts school, or even up until marriage. If given a milk name, often a girls' name was chosen for a boy, because it was thought that a male child was the " special prey of evil spirits" and that these spirits will be tricked if the boy had a girl's name. A female, and sometimes a male child, was given an animal name or called some sort of derogatory name in a joking sort of way.

A child's formal name was usually picked by it's grandparents or in some areas, a fortune-teller. This was the name that was presented during the Red Egg and Ginger Party.

Traditionally, the baby's head was also shaved during this party. The girls' head was shaved before the image of "Mother", the Goddess of Children, and the boy's head was shaved before the ancestral table. The symbolism of this practice is not entirely known, but it is speculated that this is the removing of the birth hair, to mark the point of the child's independent existence. Today, many Asian grandparents believe that shaving the girls' head at birth is a way to encourage the growth of long, lustrous hair although this practice isn't usually done during Asian American celebrations today.

In these modern times, parents continue to hold this celebration to signify the formal acceptance of the new child into the family. The celebration dinner for the guests can happen at home or in a restaurant.

As in weddings or festivals, the color red represents happiness and good luck. Eggs are significant because they symbolize fertility and the renewal of life. Also, their shape is traditionally associated with harmony and unity. According to some sources, an even number of eggs means a daughter has been born, while
an odd number represents a son.

Ginger is important because in the yin (cold) and yang (warm) balance of Chinese food, ginger adds a touch of 'hotness' to the nutritional needs of the new mother, who is tired and weak (or too yin) after giving birth.

Guests receive red-dyed eggs and ginger at the party. Additionally, instead of sending thank you cards to the guests, more traditional parents may send thank you gifts consisting of small round biscuits with pork in them.

Babies are given tiger hats, tiger shoes, and tiger bibs. In Chinese folklore, the tiger is the king of beasts and is believed to have special powers for protecting children. The tiger hat that covers their heads has gold, silver and jade charms sewn on it for good luck.

The tiger shoes have embroidered eyes that are sewn wide-open. These open eyes on their feet help keep children from tripping as they first learn to walk!

Lysee or "lucky money" in red envelopes was traditionally given to baby boys, while girls received expensive jewelry by close relatives. Nowadays, however, this tradition extends to all babies.
at 04:17