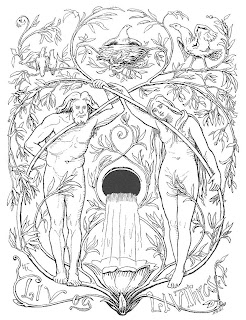 In Norse mythology, Yggdrasil (pronounced /ˈɪɡdrəsɪl/; from Old Norse Yggdrasill, pronounced [ˈyɡːˌdrasilː]) is an immense tree that is central in Norse cosmology; the world tree, and around the tree exist nine worlds. It is generally considered to mean "Ygg's (Odin's) horse".

Yggdrasil is attested in the Poetic Edda

, compiled in the 13th century from earlier traditional sources, and the Prose Edda, written in the 13th century by Snorri Sturluson. In both sources, Yggdrasil is an immense ash tree that is central and considered very holy. The gods go to Yggdrasil daily to hold their courts. The branches of Yggdrasil extend far into the heavens, and the tree is supported by three roots that extend far away into other locations; one to the well Urðarbrunnr in the heavens, one to the spring Hvergelmir, and another to the well Mímisbrunnr. Creatures live within Yggdrasil, including the wyrm (dragon) Níðhöggr, an unnamed eagle, and the stags Dáinn, Dvalinn, Duneyrr and Duraþrór.

Conflicting scholarly theories have been proposed about the etymology of the name Yggdrasill, the possibility that the tree is of another species than ash, the relation to tree lore and to Eurasian shamanic lore, the possible relation to the trees Mímameiðr and Læraðr, Hoddmímis holt, the sacred tree at Uppsala, and the fate of Yggdrasil during the events of Ragnarök.

Yggdrasil comes from Old Norse Yggdrasill. In English, the spellings Yggdrasil, Yggdrasill, and Ygdrasil are used, as shown by entries in English dictionaries and encyclopedias. It is usually pronounced /ˈɪɡdrəsɪl/ in English, and only rarely [ˈyɡdrəsiːl] because the sound [y] does not exist in English and most English speakers are therefore unaccustomed to producing it.

The generally accepted meaning of Old Norse Yggdrasill is "Odin's horse", based on the etymology that drasill means "horse" and Ygg(r) is one of Odin's many names. The Poetic Edda poem Hávamál

describes how Odin sacrificed himself to himself by hanging in a tree, making this tree Odin's gallows. This tree was apparently Yggdrasil, and gallows can be called "the horse of the hanged", so Odin's gallows developed into the expression "Odin's horse", which then became the name of the tree.

Nevertheless, scholarly opinions regarding the precise meaning of the name Yggdrasill vary, particularly on the issue of whether Yggdrasill is the name of the tree itself or if only the full term askr Yggdrasils refers specifically to the tree, where Old Norse askr means "ash tree". According to this interpretation, askr Yggdrasils means "the world tree upon which 'the horse [Odin's horse] of the highest god [Odin] is bound'". Both of these etymologies rely on a presumed but unattested *Yggsdrasill.

A third interpretation, presented by F. Detter, is that the name Yggdrasill refers to the word yggr ("terror"), yet not in reference to the Odinic name, and so Yggdrasill would then mean "tree of terror, gallows". F. R. Schröder has proposed a fourth etymology according to which yggdrasill means "yew pillar", deriving yggia from *igwja (meaning "yew-tree"), and drasill from *dher- (meaning "support").

comments that the existence of nine worlds around Yggdrasil is mentioned more than once in Old Norse sources, but the identity of the worlds is never stated outright, though it can be deduced from various sources. Davidson comments that "no doubt the identity of the nine varied from time to time as the emphasis changed or new imagery arrived". Davidson says that it is unclear where the nine worlds are located in relation to the tree; they could either exist one above the other or perhaps be grouped around the tree, but there are references to worlds existing beneath the tree, while the gods are pictured as in the sky, a rainbow bridge (Bifröst) connecting the tree with other worlds. Davidson opines that "those who have tried to produce a convincing diagram of the Scandinavian cosmos from what we are told in the sources have only added to the confusion".


[...] the conception of the tree rising through a number of worlds is found in northern Eurasia and forms part of the shamanic lore shared by many peoples of this region. This seems to be a very ancient conception, perhaps based on the Pole Star, the centre of the heavens, an the image of the central tree in Scandinavia may have been influenced by it [...]. Among Siberian shamans, a central tree may be used as a ladder to ascend the heavens [...].

Davidson says that the notion of an eagle atop a tree and the world serpent coiled around the roots of the tree has parallels in other cosmologies from Asia. She goes on to say that Norse cosmology may have been influenced by these Asiatic cosmologies from a northern location. Davidson adds, on the other hand, that it is attested that the Germanic peoples worshiped their deities in open forest clearings and that a sky god was particularly connected with the oak tree, and therefore "a central tree was a natural symbol for them also".

Connections have been proposed between the wood Hoddmímis holt (Old Norse "Hoard-Mímir's" holt) and the tree Mímameiðr ("Mímir's tree"), generally thought to refer to the world tree Yggdrasil, and the spring Mímisbrunnr. John Lindow concurs that Mímameiðr may be another name for Yggdrasil and that if the Hoard-Mímir of the name Hoddmímis holt is the same figure as Mímir (associated with the spring named after him, Mímisbrunnr), then the Mímir's holt—Yggdrasil—and Mímir's spring may be within the same proximity.

notes that it is nowhere expressly stated what will happen to Yggdrasil during the events of Ragnarök. Larrington points to a connection between the primordial figure of Mímir and Yggdrasil in the poem Völuspá, and theorizes that "it is possible that Hoddmimir is another name for Mimir, and that the two survivors hide in Yggdrasill."

theorizes that the survival of Líf and Lífþrasir through Ragnarök by hiding in Hoddmímis holt is "a case of reduplication of the anthropogeny, understandable from the cyclic nature of the Eddic escatology." Simek says that Hoddmímis holt "should not be understood literally as a wood or even a forest in which the two keep themselves hidden, but rather as an alternative name for the world-tree Yggdrasill. Thus, the creation of mankind from tree trunks (Askr, Embla) is repeated after the Ragnarok as well." Simek says that in Germanic regions, the concept of mankind originating from trees is ancient. Simek additionally points out legendary parallels in a Bavarian legend of a shepherd who lives inside a tree, whose descendants repopulate the land after life there has been wiped out by plague (citing a retelling by F. R. Schröder). In addition, Simek points to an Old Norse parallel in the figure of Örvar-Oddr, "who is rejuvenated after living as a tree-man (Ǫrvar-Odds saga 24–27)".

Continuing as late as the 19th century, warden trees were venerated in areas of Germany and Scandinavia, considered to be guardians and bringers of luck, and offerings were sometimes made to them. A massive birch tree standing atop a burial mound and located beside a farm in western Norway is recorded as having had ale poured over its roots during festivals. The tree was felled in 1874.

Davidson comments that "the position of the tree in the centre as a source of luck and protection for gods and men is confirmed" by these rituals to Warden Trees. Davidson notes that the gods are described as meeting beneath Yggdrasil to hold their things, and that the pillars venerated by the Germanic peoples, such as the pillar Irminsul, were also symbolic of the center of the world. Davidson details that it would be difficult to ascertain whether a tree or pillar came first, and that this likely depends on if the holy location was in a thickly wooded area or not. Davidson notes that there is no mention of a sacred tree at Þingvellir in Iceland yet that Adam of Bremen

describes a huge tree standing next to the Temple at Uppsala in Sweden, which Adam describes as remaining green throughout summer and winter, and that no one knew what type of tree it was. Davidson comments that while it is uncertain that Adam's informant actually witnessed that the tree's type is unknown, the existence of sacred trees in pre-Christian Germanic Europe is further evidenced by records of their destruction by early Christian missionaries, such as Thor's Oak by Saint Boniface

comments that behind Irminsul, Thor's Oak in Geismar, and the sacred tree at Uppsala "looms a mythic prototype, an Yggdrasil, the world-ash of the Norsemen".
at 04:18

My book, The Norse Myths, is the most complete version of the norse myths in the English language. Here's a link: ttp://bit.ly/axuVDq. My book is a complete retelling in prose form of all the myths, before the beginning, the creation, setting up of the worlds (including Yggdrasil whose branches reach all the Worlds of the Tree), the adventures and then the ending of all things (Ragnarokr). And, I do go into great detail as to what exactly happens to Yggdrasil during Ragnarokr, which is quite central to the myths and is not unknown.