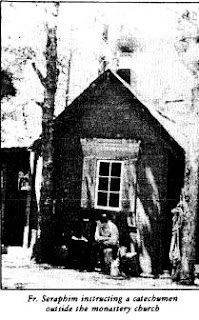 It is impossible to relate the interplay of all the events throughout one’s life which lead to a conversion to Orthodox Christianity. From the moment of birth God unfolds the world before the human soul, influencing it in ways which are often unrecognized. In telling my story I can, therefore, only outline the main points of my conversion.

One of the major factors which began my search for the truth was my mother’s death when I was 12. This crisis forced me to think seriously about the transient nature of earthly life and to question what happens after death. My entire adolescence was pre-occupied with this quest. I went through many stages trying to figure it all out. First I went through a turbulent period of experimentation with drugs, trying to gain access to the “other world.” I certainly experienced altered states of consciousness, but found no answers to my questions.

Then, through an interesting chain of events, I was “born again”. My experience with born-again Christianity was intense, and through it I began to find some answers to my life’s questions. I studied the Bible diligently and found some comfort, but, like the Ethiopian eunuch, how could I truly understand “lest someone guide me” (Acts 8:31). There were so many denominations, each holding its own interpretation of the Scriptures – and I was not indifferent to the fact that the Protestant churches, like myself, lacked a sure guide.

In my college years I was introduced to Eastern spirituality. I was attracted to Buddism and, later, Hinduism by the element of mysticism, the idea of a spiritual director, and the fact that they were steeped in tradition.

At the same time that I was becoming more and more involved with Hinduism, I fell in love with a girl who was in the process of converting to Orthodoxy. We had many long conversations about spirituality, but with my Hinduistic understanding I perceived Orthodoxy as merely one of the many paths to God (and considered my girlfriend to be narrow-minded). Through her I was exposed to Orthodoxy, and went to several Orthodox services, including her baptism. I was impressed by Orthodoxy and Orthodox Christians, yet continued to regard it as but “one flower in the bouquet of God”.

The summer following my college graduation, I took a trip around the western United States. I conceived of this trip as a spiritual pilgrimage; roaming the West in a pickup truck and spending many days in solitude, study, and reflection. In preparing for my sojourn, I brought along many books including The Way of a Pilgrim

. Somewhere in Colorado I began reading this book and found that I could not put it down. I began to re-consider Orthodoxy and even tried to attend Liturgy one Sunday in an Orthodox church in New Mexico, but the priest was away.

Only hours after I had finished the book, I came upon an interesting character named Jim. I saw Jim walking along the roadside in the desert heat and I offered him a ride. He seemed to have walked out of the pages of the Pilgrim: he had been on the road for almost 20 years, traveling with only a bedroll and a Bible, stopping whenever possible to receive Communion at a Catholic church, always trusting that God would provide for his needs. We traveled together for several days and had many in-depth conversations about God and religion. He had been involved in Hinduism in the late 50’s and seemed to understand my situation. In our discussions he began to show me the incompatibility of true Hinduism and true Christianity. The day we parted he left me with a deeper respect for Christianity and these words of wisdom, “In every religion there are some fragments of truth, but without Christ Who is Truth Himself, the fragments mean nothing.”

Reading more about Orthodoxy as I traveled north again, I resolved to visit the priest-monk who had baptized my girlfriend. We had a brief but fruitful conversation at the end of which he suggested I go visit the St. Herman of Alaska Monastery. I was given a tape of St. Innocent’s “An Indication of the Way into the Kingdom of Heaven,” to which I listened while driving. These events primed me for my stay at the monastery.

I cannot describe the impact of my impressions of the monastery and its monks. Most influential were the talks I was blessed to have had with the late Fr. Seraphim Rose. Here was a man who lived Orthodoxy. Through our conversations I began to see that here, in Orthodox Christianity, I might find that for which I had been searching for so long. He, as well as Abbot Herman, instilled in me a love and reverence for this Holy Faith. Through witnessing the beauty of the services and the Orthodox way of life there at the monastery, a firm desire for Orthodoxy was kindled in me. At the end of my stay I was made a catechumen and my conscious conversion to Orthodoxy began.

My catechumenate lasted a year during which time I witnessed Fr. Seraphim’s death, an experience which sealed my decision to become Orthodox. This man had lived, and now was dying, as a true Orthodox Christian. And this inspired me to begin resolutely preparing for baptism. Throughout my catechumenate I was blessed with the counsel and example of many fine people. The St. Herman monks (especially Fr. Herman), numerous fine priests, many good lay people, and “the elders bound in leather and gold” – Orthodox texts.

Finally, by the infinite grace of God, I was baptized. Of course, the conversion process does not end with one’s baptism. The Orthodox life is an unceasing struggle in the conversion of the worldly man to the diving. Through the prayers of the Most Holy Mother of God and of all the saints, may we all be truly converted.
at 00:18