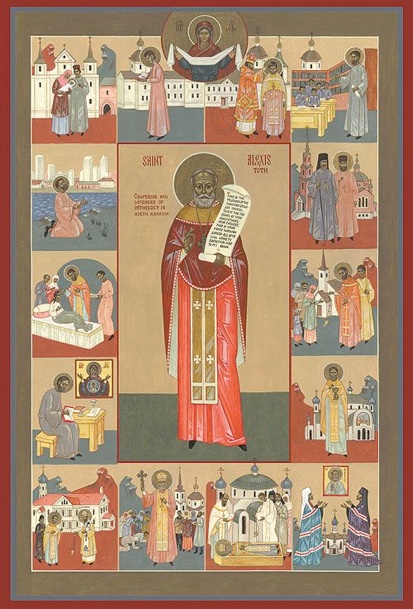 Saint Alexis Toth/Tovt (or Alexis of Wilkes-Barre) (18 March 1853, Kobylnice - 7 May 1909, Wilkes-Barre, Pennsylvania) was a Russian Orthodox church leader in the American Midwest who, having resigned his position as a priest in the Ruthenian Catholic Church, became responsible for the conversions of approximately 20,000 Eastern-Rite Catholics to the Russian Orthodox Church. This in turn contributed to the growth of Orthodoxy in America and the ultimate establishment of the Orthodox Church in America. He was canonized by that church in 1994.

Alexis Georgievich Toth was born to Father George and Cecilia Toth on March 14, 1853, near Prešov in Zepes county of Slovakia (then a part of the Austrian Empire) during the reign of Franz Joseph. Having completed his primary schooling, he attended a Roman Catholic seminary for one year, followed by three years in a Greek Catholic seminary and additional time at the University of Prague, where he graduated with a degree in theology.

Toth married Rosalie Mihaluk on April 18, 1878, and was ordained to the priesthood in 1878 by Bishop Nicholas Toth, the Greek Catholic bishop of Prešov. Following the death of his wife and child a few years later, he served in local parishes, as a diocesian chancellor, and as professor and director at the Greek Catholic seminary of Prešov. In 1889, Fr. Alexis' bishop received a petition from the Ruthenian Greek-Catholic church in America, asking that Toth be sent to them as a priest. He arrived on November 15, 1889, and by the 27th of that month was holding services at St. Mary's Greek Catholic Church in Minneapolis, Minnesota. Finding the church practically barren of furnishings and deeply in debt, he set about rectifying the situation, ultimately bringing the parish to a place of fiscal stability—all while never receiving a salary.

When speaking of their meeting, Toth later claimed that Bishop Ireland became angry and threw Toth's priestly credentials onto his table while ardently protesting his presence in the city. Toth reported that Ireland said he did not consider Toth or his bishop to be Catholic at all. Toth reported that the conversation became more heated as it progressed, with both men losing their tempers. Ireland refused to give Toth permission to serve as a priest in Minneapolis, and furthermore ordered the Roman Catholic parishes and priests in the city not to have anything to do with the Ruthenian Catholic priest or his parishioners.

Although Toth sent letters to his bishop in Slovakia detailing his experience with Ireland and requesting specific instructions, he never heard anything in reply. Later, Fr. Toth came to be told that he and other Eastern-Rite Catholic priests in America were to be recalled to Europe, and their parishioners folded into existing Roman Catholic congreations in their respective cities.

For Alexis Toth, this was the last straw. Having heard nothing from his own bishop, he and other Eastern-Rite Catholic priests who had shared in similar experiences began to cast about for a different solution to their dilemma. In December 1890, they contacted the Russian consul in San Francisco, asking to be put in touch with a Russian Orthodox bishop. Correspondence and personal meetings with Bishop Vladimir Sokolovsky of San Francisco followed, culminating in Toth's decision to formally enter the Russian Orthodox church in March 1892. Toth was accompanied by 361 fellow Eastern-Rite Catholics; thousands more would follow in the years to come, largely due to his own efforts to evangelize them toward this move.

Toth was elevated to the rank of Protopresbyter later in his life, continuing his efforts to convert the Uniates of America to Eastern Orthodoxy. He died on May 7, 1909, and was honored with a special shrine at St. Tikhon's Monastery in South Canaan, Pennsylvania. On May 29, 1994, Toth was glorified (canonized) as St. Alexis of Wilkes-Barre by the Orthodox Church in America, whose establishment and membership numbers are largely traceable to his efforts.