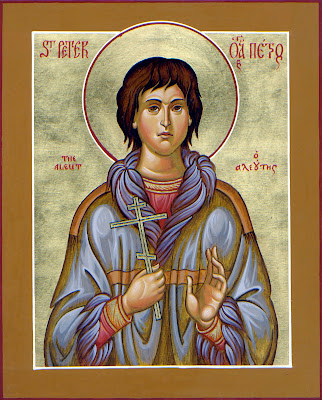 Cungagnaq (date of birth unknown - d. 1815) is venerated as a martyr and saint (as Peter the Aleut) by the Eastern Orthodox Church. He was  a native of Kodiak Island (Aleutian Islands), and is said to have received the Christian name of Peter when he was baptized into the Orthodox faith by the monks of St. Herman's missionaries operating in the north. He is purported to have been captured by Spanish soldiers near San Pedro (Pacifica, California) and tortured and killed at the instigation of Roman Catholic priests either there or at Mission Dolores, in San Francisco. At the time identified for his death, California was Spanish territory, and Spain was worried about Russian advances southwards from Alaska. Hubert Howe Bancroft, in his multi-volume History of California, notes that, in connection with an incident wherein a Russian fur-hunting expedition was taken into custody after declining to leave San Pedro, one Russian source accused "the Spaniards of cruelty to the captives, stating that according to Kuskof’s report one Aleut who refused to become a Catholic died from ill-treatment received from the padre at San Francisco."

In 1815 a group of Russian employees of the Russian American Company and their Aleut seal and otter hunters, including Peter, were captured by Spanish soldiers, while hunting for seals near San Pedro. The soldiers took them to Misión San Pedro y Pablo for interrogation. One Russian source states that after being taken prisoner near modern Los Angeles, the captives were taken to Mission Dolores—that is, modern San Francisco. With threats of torture, the Roman Catholic priests attempted to force the Aleuts to deny their Orthodox faith and to convert to Roman Catholicism.

When the Aleuts refused, the priest had a toe severed from each of Peter's feet. Peter still refused to renounce his faith and the Spanish priest ordered a group of Native Americans, indigenous to California, to cut off each finger of Peter's hands, one joint at a time, finally removing both his hands. They eventually disemboweled him, making him a martyr to the Eastern Orthodox faith. They were about to torture the next Aleut when orders were received to release them.

An account of the martyrdom of Peter the Aleut is contained in a lengthy letter written on Nov. 22, 1865, by Symeon Ivanovich Yanovsky to Damascene, abbot of the Valaam Monastery in Russia. Yanovsky (1789–1876), who is also one of the chief sources of information about St. Herman of Alaska, was chief manager of the Russian colonies from 1818-1820. In the letter he was reporting on an incident that he had heard from an eyewitness, and that had taken place in 1815. The letter contains the description of Peter being tortured.  Yanovsky adds, "At the time I reported all this to the Head Office in St. Petersburg." And indeed, this earlier communication, his official dispatch to the company's main office—dated Feb. 15, 1820, five years after the event—also relates the story of St. Peter's martyrdom.

According to Yanovsky's 1865 letter, upon receiving the report of Peter's death, St. Herman back on Kodiak Island was moved to cry out, "Holy new-martyr Peter, pray to God for us!"

Peter the Aleut was formally declared a Saint by the Orthodox Church in America as the "Martyr of San Francisco" in 1980. His feast day is commemorated on September 24.

There are a number of churches dedicated to him in North America, for example at Lake Havasu City, Arizona; Minot, North Dakota; Calgary; and Abita Springs, Louisiana.