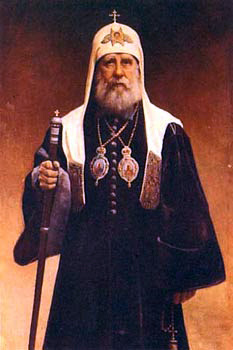 Saint Tikhon of Moscow (Russian: Тихон, 31 January [O.S. 19 January] 1865 – 7 April 1925), born Vasily Ivanovich Bellavin (Russian: Василий Иванович Беллавин), was the 11th Patriarch of Moscow and All Russia of the Russian Orthodox Church (Moscow Patriarchate) during the early years of the Soviet Union, 1917 through 1925.

From 1878 to 1883, Bellavin studied at the Pskov Theological Seminary. In 1888, at the age of 23, he graduated from the Saint Petersburg Theological Academy as a layman. He then returned to the Pskov Seminary and became an instructor of Moral and Dogmatic Theology. In 1891, at the age of 26, he took monastic vows and was given the name Tikhon in honor of St. Tikhon of Zadonsk. Tikhon was consecrated Bishop of Lublin on 19 October 1897. On 14 September 1898, Bishop Tikhon was made Bishop of the Aleutians and Alaska. As head of the Russian Orthodox Church in America he reorganized the diocese and changed its name from "Diocese of the Aleutians and Alaska" to "Diocese of the Aleutians and North America" in 1900. While living in the United States Archbishop Tikhon was made a citizen of the United States.

He had two vicar bishops in the United States: Bishop Innocent (Pustynsky) in Alaska, and St. Raphael (Hawaweeny) in Brooklyn. In June 1905, St. Tikhon gave his blessing for the establishment of St. Tikhon's Monastery in Pennsylvania. On 22 May 1901, he blessed the cornerstone for St. Nicholas Cathedral in New York, and was also involved in establishing other churches in North America. On 9 November 1902, he consecrated the church of St. Nicholas in Brooklyn for the Syrian Antiochian Orthodox immigrants. Two weeks later, he consecrated St. Nicholas Cathedral in New York.

In 1907, he returned to Russia, and was appointed Bishop of Yaroslavl. He was transferred to Vilnius, Lithuania, on 22 December 1913. On 21 June 1917, he was elected the ruling bishop of Moscow by the Diocesan Congress of clergy and laity. On 15 August 1917, Archbishop Tikhon was raised to the dignity of Metropolitan of Moscow. On 5 November of the same year, after an election as one of the three candidates for the reinstated Moscow Patriarchate, Metropolitan Vladimir of Kiev announced that Metropolitan Tikhon had been selected for the position after a drawing of lots as the new Patriarch of the Russian Orthodox Church.

During the Russian Civil War the Patriarch was widely seen as anti-Bolshevik and many members of the Orthodox clergy were jailed or executed by the new regime. Tikhon openly condemned the killings of the tsar's family in 1918, and protested against violent attacks by the Bolsheviks on the Church.

During the famine in 1922 the Patriarch was accused of being a saboteur by the Communist government, for which he was imprisoned from April 1922 until June 1923 in Donskoy Monastery. Among acts incriminated to him was his public protest against nationalization of the property of the Church. This caused international resonance and was a subject of several notes to the Soviet government.

Under pressure from the authorities, Patriarch Tikhon issued several messages to the believers in which he stated in part that he was "no longer an enemy to the Soviet power". Textual analysis of these messages shows considerable similarity with a number of documents exchanged in the Politburo on the "Tikhon's Affair". Despite his declaration of loyalty, he continued to enjoy the trust of the Orthodox community in Russia. In 1923 Patriarch Tikhon was "deposed" by a Soviet-sponsored council of the so-called Living Church, which decreed that he was "henceforth a simple citizen—Vasily Bellavin." This deposition has never been recognized as an act of the Russian Orthodox Church, and is therefore considered invalid by authorities of both the Russian Orthodox Church, and the Russian Federation.

When the sewerage system under the hastily erected first Mausoleum of Lenin was damaged and a leak occurred, Tikhon remarked, "The balm accords with the relics" (Russian: По мощам и елей). The phrase was widely quoted.

In 1924 the Patriarch fell ill and was hospitalized. On 5 April 1925, he served his last Divine Liturgy, and died two days later, 25 March (O.S.)/7 April, the Feast of the Annunciation. He was buried on 12 April in the winter church of Donskoy Monastery in Moscow. From the time of his death, he was widely considered a martyr or confessor for the faith.

Patriarch Tikhon was glorified (canonized) a saint by the Synod of Bishops of the Russian Orthodox Church Outside Russia in conjunction with the great glorification of the New Martyrs and Confessors of the Soviet Yoke on 1 November [O.S. 19 October] 1981. He was later glorified by the Moscow Patriarchate during the Bishop's Council of 9–11 October 1989. This later canonization process is generally considered an example of the thaw in Church-Soviet relations during the Glasnost era.

St Tikhon's relics were believed lost, but on 19 February 1992 (or, according to another source, 22 February), they were discovered in a concealed place in the Donskoy Monastery and were found to be almost entirely incorrupt. The relics were placed in a reliquary and on 5 April [O.S. 23 March] 1992, fifty bishops solemnly transferred them to the Katholikon (main church) of the Donskoy Monastery in a place of honour by the soleas (close to the sanctuary).